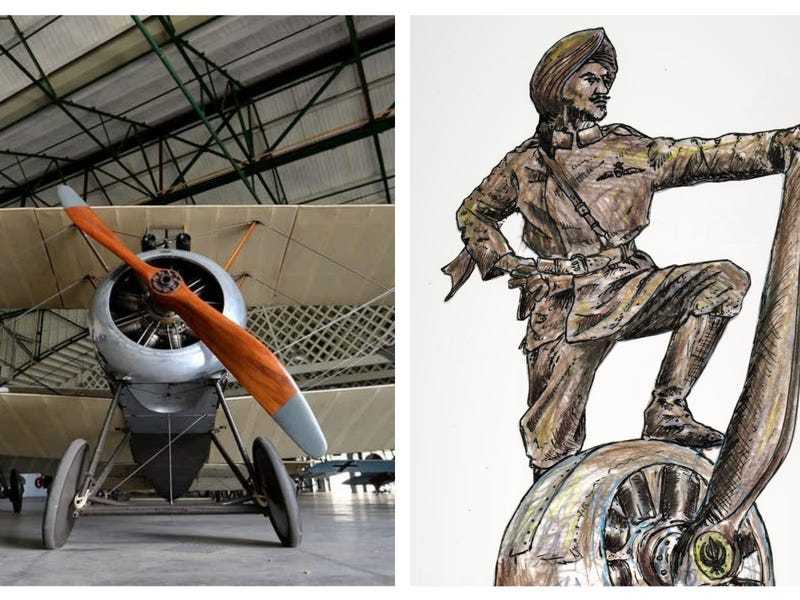 First World War fighter pilot and BAME pioneer Hardit Singh Malik is to be remembered in a new memorial dedicated to the thousands of Sikhs who lost their lives in the two world wars.

The statue of the first Indian to fly as a pilot with the Royal Flying Corps – the precursor of the RAF – is set to be created in Southampton city centre to mark the “lost history” of ethnic minorities fighting for Britain and the allies.

It is planned to be installed by April 2023.

Group Captain Malik, an Indian civil servant and diplomat prior to becoming a pilot, became known as the “Flying Hobgoblin” as he wore a specially designed helmet that fitted over his turban.

By the end of the war, he was credited with two aerial victories, and of the four Indians who flew with the RFC and RAF, he was one of two who survived.

He flew with 28 Squadron RFC and served on the Western Front in October 1917, flying a Sopwith Camel on combat missions across France and Italy.

On October 26, after shooting down a German aircraft, he was wounded and crash-landed behind Allied lines – his aircraft was found to have suffered more than 450 hits.

Mr Perry said: “Monuments such as this are a vital part of the fight for equal representation.

“These artworks are long overdue thanks and recognition to the communities from around the world who have supported Britain in its past and continue to do so in vital roles, not just in the armed forces, but our health care and every aspect of modern life.

“We are a beautiful and diverse nation; our artworks, as with all things, should reflect this.”

“Hardit Singh Malik was not just the first Sikh community member and BAME pilot, but a major UK level pioneer for our BAME communities as his story involved successfully challenging the racial exclusion notions of the day with his appointment as a pilot in the Royal Flying Corps.

“History will judge that Malik was a true giant in what he achieved in regard to ending race-related segregationist perspectives and practices in our British armed forces in the First World War era.”

Lord Rami Ranger, chairman of the British Sikh Association and OCHD chief patron, said: “I am truly overwhelmed by the striking beauty and power of this exceptional design of the memorial, which captures the spirit and endeavour of this great RAF fighter pilot, Hardit Singh Malik, so well.”

Pritheepal Singh, OCHD director, said: “I am absolutely delighted with the final design. It testifies to the major contribution our Sikh and broader ethnic minority communities have made to our country, as we live in such a vibrant multicultural society here in Southampton.”