'We're always looking to achieve perfection in the kitchen'

Bohemia at the Club Hotel & Spa recently became one of the few restaurants to be awarded four AA Rosettes. Tom Ogg spoke to head chef Callum Graham about what the prestigious award means for him and his team, the importance of experimenting in the kitchen – and why learning his trade in Paris was a character-building experience

IF the AA Hospitality Awards are to the hospitality industry what the Oscars are to the film industry then Bohemia was the recipient of this year’s Best Picture award.

The St Helier bar and restaurant – which is the only Michelin-starred restaurant in Jersey – was awarded four AA Rosettes in a star-studded ceremony held at the five-star JW Marriott Grosvenor House in London on Monday 26 September.

There are very few other venues in the UK with four AA Rosettes to their name, with the AA stating that the following criteria is required for a restaurant to receive the award: ‘The restaurant must exhibit intense ambition, a passion for excellence, superb technical skills and remarkable consistency, with cooking that demands national recognition. They will combine appreciation of culinary traditions with a passionate desire for further exploration and improvement.’

Among those in attendance at the AA Hospitality Awards last month was executive head chef Callum Graham, who collected the award on behalf of the team at Bohemia.

‘It was an absolutely brilliant night,’ says 31-year-old Callum, chatting in the elegant Bohemia dining area.

‘The awards haven’t taken place for the last couple of years due to Covid-19 and so I think it felt even more special because it was the first big event for a while in which everyone in hospitality has been able to get together. It really was a “who’s who” of the cooking world. It was just phenomenal.’

Asked if he had any inclination beforehand that Bohemia would be walking away with four AA Rosettes at the end of the night, Callum says not.

‘I found out during the evening that we have been visited by AA inspectors more often than I’d thought,’ he says. ‘With the AA, they do their homework and they want to provide a reputable guide, and so they will send over anonymous diners throughout the year. As such, you’ve got to be consistent and you’ve got to do what you do to a high standard. Sometimes you will be aware that an inspector is visiting, but it is often anonymous.’

Having been promoted to head chef in early 2020 just months before the Covid-19 pandemic swept the globe, Callum is understandably thrilled by the award, which arrived after two testing years for the hospitality industry.

‘I worked my way up the ranks to souschef under [former Bohemia head chef] Steve Smith, and then I took over from Steve when he left to go to Pennyhill Park,’ he says. ‘Sometimes these processes can take a little bit of time, but I think we have been cooking at a very high level since I took over.’

Not one for blowing his own trumpet, Callum repeatedly points out that the four AA Rosettes are not just a recognition of his own culinary talents, but rather those of the entire kitchen team.

‘We cook at the same high standard, day in, day out, regardless of whether I’m in the kitchen or not,’ he says. ‘There is a famous chef quote where the chef was asked: “Who cooks when you’re not there?”, and he replied: “The same team as always”.’ 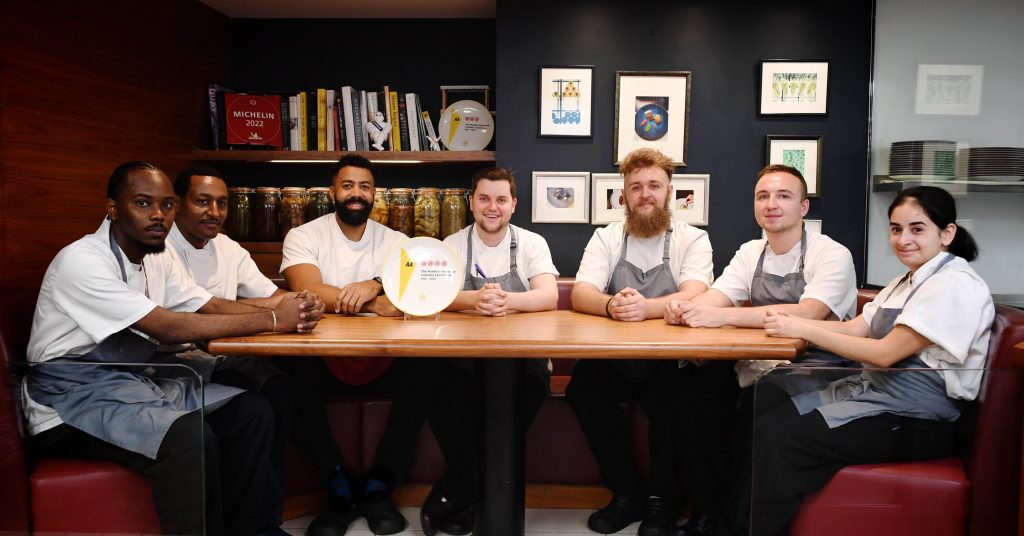 Suffice to say, AA award-winning dishes such as those on the Bohemia menu don’t come easily and are often the result of a considerable amount of trialand-error and experimentation.

‘For me, there can’t be a bad idea,’ says Callum. ‘You decide to try something, you work on it and whittle it down, and then either you try it and say: “Yes, I was on a good wavelength there”, or you try it and say: “What on earth was I thinking?” But it’s always worth trying. If it’s something that works, you keep developing it and tweaking it until you feel comfortable putting it out into the restaurant.

‘There are occasionally conflicting opinions [in the kitchen] but I do feel that there should always be challenging dishes on the menu,’ he continues. ‘When it comes to food, you have to realise that it can be very personal – if you think you’re going to please 100 guests out of 100 with a particular dish, well, it’s not going to happen. Everyone has a different opinion. At the end of the day, there are daring flavour combinations and daring techniques that you can push the boundaries with, but you have to make sure they are done right.

‘The dishes change with the seasons, of course, and we’re always thinking ahead to the next season,’ he continues. ‘We’re very much in constant dialogue with local suppliers and local farmers. We’ll ask not only what they have available now, but what they will have available a month from now, or two or three months from now.’

As this suggests, Callum and the team strive to incorporate as many local ingredients into their dishes as possible.

‘When Covid happened, myself and the members of the team started looking at what we had on our doorstep that we could use rather than importing from the UK and abroad. And I think this is something that is becoming more and more important given the way in which the world is developing. If you can get a fantastic product locally then why wouldn’t you try and incorporate it into your menu?’

A particular passion for Callum is encouraging people to try dishes which they wouldn’t generally want to eat, be they friends, family members, diners, hotel guests or otherwise.

‘I constantly say to the front-of-house team that we need to have the confidence of customers and guests, and the reason I say that is because we will often have someone come in and they’ll say “I can’t eat this” or “I can’t eat that”. But, if you dive in a bit further, you discover that actually they can eat it, they just don’t like, or rather they think that they don’t like it, and there is a difference there.

‘Almost everyone I’ve met in life has had their mum or dad or a grandparent or some other relative cook them something during childhood and it wasn’t cooked properly and, as a result, they’ve been put off that one dish or ingredient for life. If you have an allergy or an intolerance, fair play, but if it’s just something that you think you don’t like because you tried it years ago and it was bad then I say, come on, let your guard down and try it. I’ve often cooked for friends and family and they’ve said: “Ooh, I didn’t know I liked that”.’

Born in Scotland, Callum was raised in Yorkshire and Milton Keynes, before moving to London after leaving school in order to work in the Gainsborough Hotel in South Kensington. After this, he relocated to Switzerland and spent three years working as chef de partie in hotels in Geneva.

‘I then decided that all good chefs have done a stint in Paris and so I went over to France and worked there for just under two years,’ he says. ‘It’s such a beautiful city and I learned an awful lot there, but it was quite difficult being a young British cook in Paris when France is considered the pinnacle of all cooking. I mean, they know everything, right? So to have a young British chef telling them what to do, it was… challenging. It tested me a lot, but it was a character-building experience.’

It was 2016 when Callum moved to Jersey and began working under Steve Smith at Bohemia. Today, he says that he hopes to call the Island his home for many more years to come.

There is nowhere that inspires more passion in Callum than the kitchen, however, and the prestigious AA award has spurred him on to devise even more impressive, imaginative and, above all, delicious dishes.

‘The whole point of a restaurant like Bohemia is that you’re almost always looking to achieve perfection,’ he says. ‘You strive for that, each and every day, in order to maintain the same high level all year round.

‘The general aim is that we have our standards and we won’t be compromised on them.’