An end to Occupation

THE well-known story of the first Liberation Day began at 3pm on Tuesday 8 May when Islanders gathered in the Royal Square to hear Winston Churchill announce to the nation ‘the unconditional surrender of all German land, sea and air forces in Europe’.

The people in the square and at home, listening on secret wirelesses and crystal sets, reacted to his famous words – ‘…and our dear Channel Islands are also to be freed today’ – with an explosion of joy and emotion.

The Bailiff, Alexander Coutanche, gave a short but impassioned speech and led the jubilant crowd in a highly emotional rendition of the national anthem.

By that evening the Liberation of the islands was already being reported in the national media.

The Manchester Evening News published comment by Noah Elstein under the headline ‘Aid for 65,000 who had victory only once – today’. 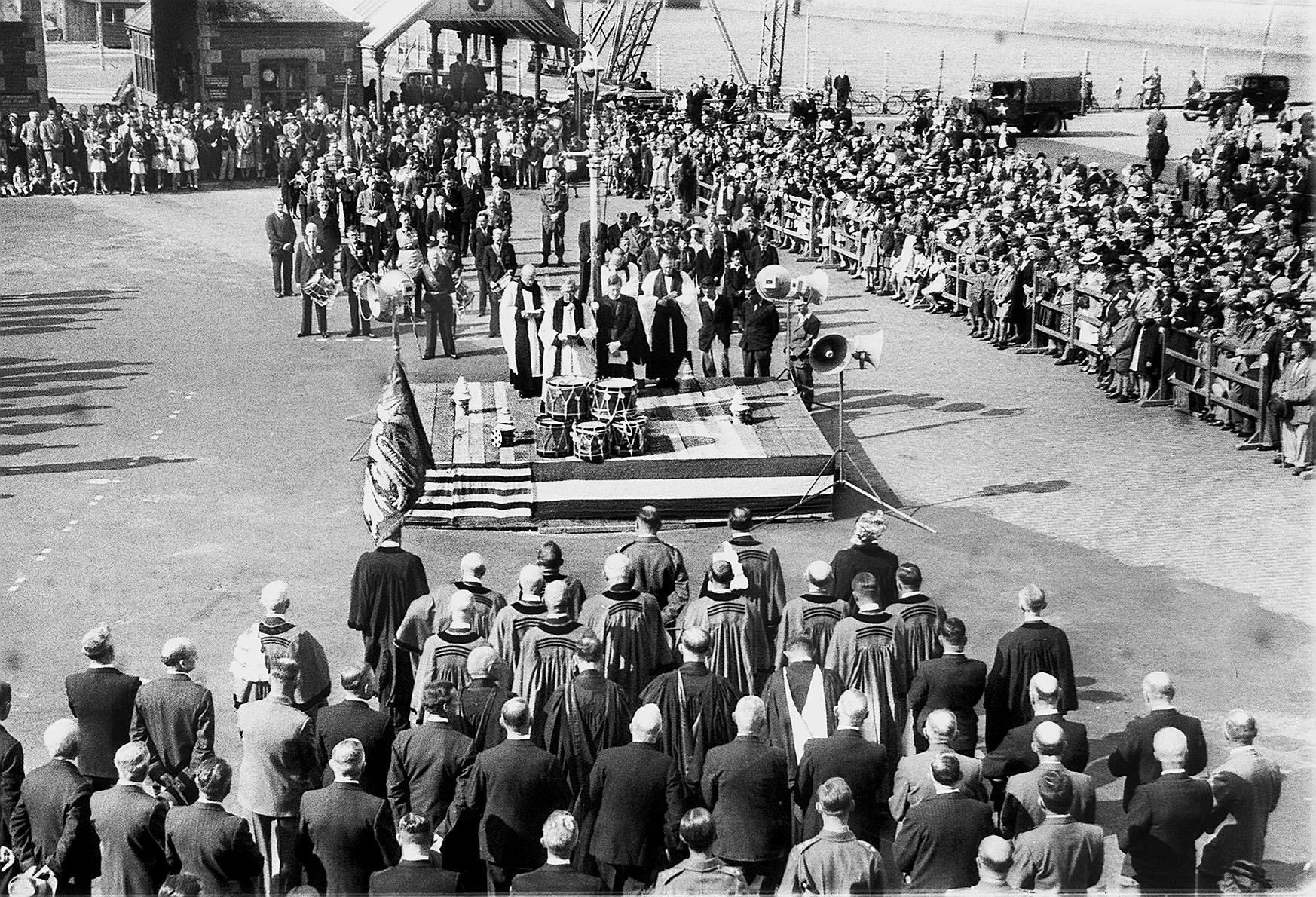 The article continued: ‘Seeing hundreds of Allied ships pass them by to liberate and feed others while they themselves were starving under German Occupation that was the ironical situation since D-Day of 65,000 Channel Islanders who now become free at last with Germany’s complete capitulation.

‘The population of this group of islands covering 75 square miles – Guernsey, Jersey, Alderney and Sark – have gazed with longing eyes on those passing ships, wondering when their turn for liberation would come. Only about a dozen miles away, from St Anne on Alderney, they could see the French coast at Auderville on the western tip of the Cherbourg peninsula.

‘The reason for not liberating these islands has been given. To attempt a landing on this grim fortress garrisoned by 15,000 Germans would have cost too high a price in casualties among the Channel Islanders.

‘There has been no underground movement among the islanders during the five years of occupation. The comparatively limited space of the islands, and the concentration of the population into small areas, have made such a movement impracticable.

‘Plans for the rehabilitation of the islands and the people are now going forward between the British Government and the islands’ governments’.

The next day the Bailiff, along with Attorney General Durett-Aubin, accompanied the German delegation to the destroyer HMS Beagle, anchored in St Aubin’s Bay, to witness the signing of the surrender of the German forces in Jersey.

War correspondent Charles Crowley was among the growing crowds on shore.

He reported: ‘I wanted to talk to individuals, to discuss what they had gone through, and ask them about the future. But for a time they were all too happy, too talkative, and fidgety. For the moment there was no past and no future; just the smiling present…’

The raising of the Union Flag at 3.40pm at Colonel W P A Robinson’s Liberation headquarters in the Pomme d’Or Hotel, quickly followed by the same at Fort Regent, are seen as officially marking the end of the Occupation. However, reality was a little more drawn out.

Within the week Home Secretary Herbert Morrison had visited the Island to assess the situation. By the end of the following week long queues formed outside banks as Islanders changed German Reichsmarks into sterling before they ceased to be legal tender on 23 May.

It wasn’t only individuals whose finances had been badly affected by the five years of enemy Occupation. In an attempt to get the Island’s economy back into shape the States immediately introduced some uncomfortable tax increases.

The Birmingham Mail informed its readers on 5 June that Islanders were facing substantial price hikes which included:

Cause for more celebration

On Thursday 7 June George VI and Queen Elizabeth visited the Island to an enthusiastic welcome, as told in the pages of the Hartlepool Northern Daily Mail that same day:

‘The people of Jersey gave the King and Queen a great welcome when they stepped ashore from the cruiser Jamaica in St Helier, today, to a 21-gun salute from the warship.

‘Replying to an address of welcome from the Assembly of the Island, the King
said: “There is much to be done before your Island can regain its former
prosperity, but I am confident that, by your endeavours, which will have the fullest support of my government, the destruction wrought by the enemy will soon be repaired and your fields restored to the abundance for which they have so long been famous.

“Our thoughts have often been with you in your years of trial, and we join with you in the hope that the war against the remaining enemy may be brought to a victorious end and that, under God’s good providence, the nations of the world may enjoy lasting peace.”’

Towards the end of June, as the war continued in the Far East, peacetime normality and order were being re-established. Although not many Islanders had telephones, the reconnection of links with the UK on Friday 22 June was seen as a milestone.

As far as the ordinary Islander was concerned the resumption of the regular mail-boat service to the UK on Tuesday 26 June was by far more important.

When Southern Railways’ Isle of Guernsey docked in St Helier she was met by crowds of Islanders lining the pier.

However, fearing what effect an influx of returning evacuees, deportees and servicemen demobbed from the armed services would have on the Island, the number of returnees was kept deliberately small for the first few months.

In the days before widespread television coverage, the UK media was keeping the nation informed of key events.

‘The first batch of leave men, evacuees and deportees from the Island were given a great welcome when they arrived by the Southern Railway mail steamer Isle of Guernsey yesterday. It was the first mail steamer to arrive at Jersey since the Occupation.

‘As she entered the Harbour fully dressed with bunting, cheer upon cheer was raised by a huge crowd assembled on and near the quay. On landing, the passengers were greeted by the Bailiff of Jersey, accompanied by the Attorney-General, the Solicitor-General, and Jurat Dorey, President of the States Council.

‘Even German prisoners of war on vessels in the Harbour seemed impressed by the enthusiasm and joined in the cheering.’

As was to be expected there were mutterings about the actions or inactions of Islanders and their leaders but these were refuted by the UK government. Newly appointed Home Secretary James Chuter Ede’s comments to the House of Commons on 17 August 1945 were extensively reported in the UK press, including the Liverpool Echo, which wrote:

‘…The policy pursued by the Administration was directed by the sole motive of doing what was best for the civil population…The Islanders as a whole never wavered in their allegiance, in spite of the threats and blandishments of the enemy. Isolated instances were offset by individual acts of heroism in helping our Secret Service Agents, sheltering airmen and helping their escape.’ 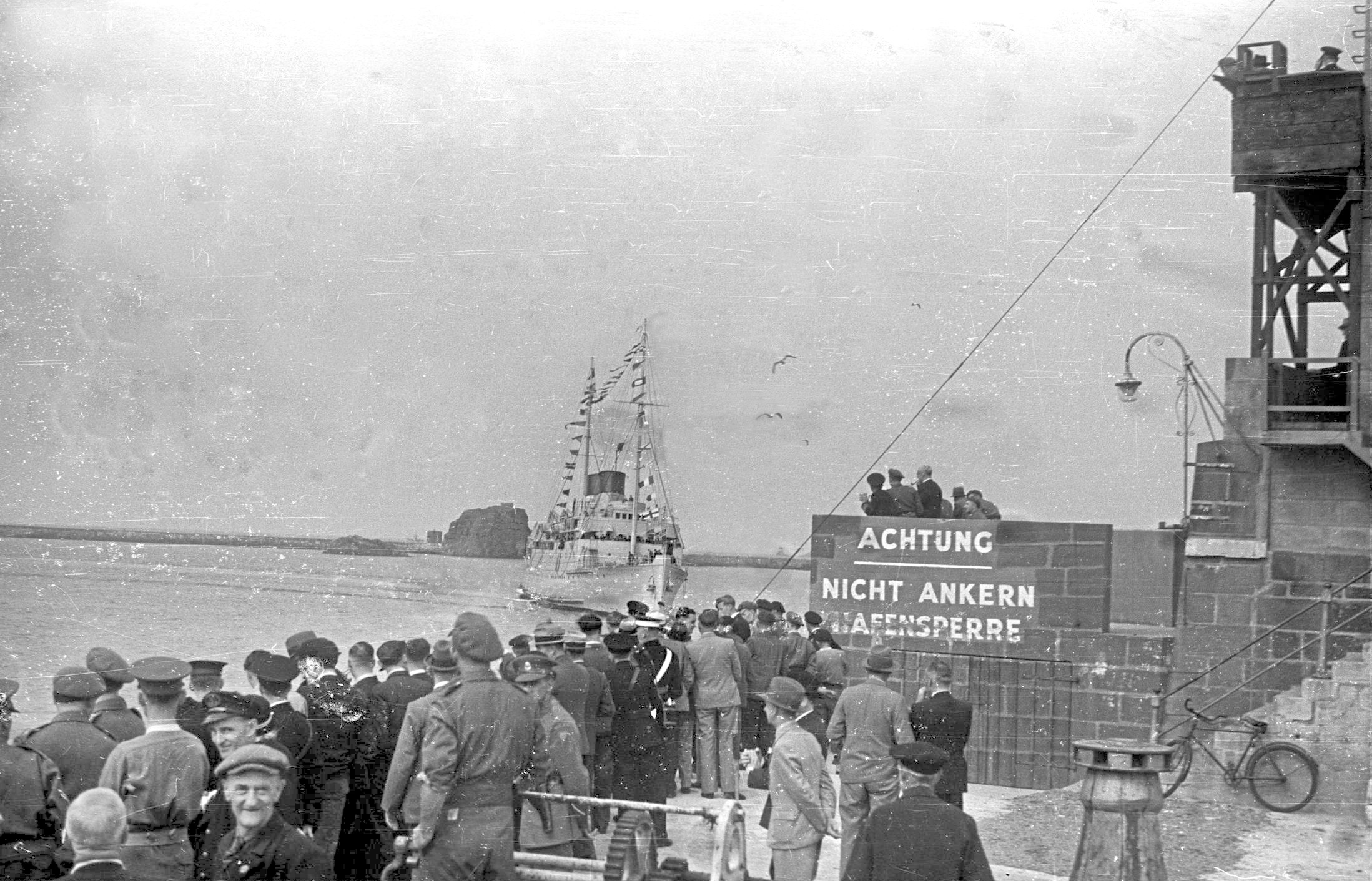 Some commentators would never be satisfied. One writing in the Stirling Observer on Tuesday 4 December admitted that he had not visited the islands since they were liberated but went on to say: ‘..Actually, the collaborationists there, as in every other country in Europe, came from the upper-crusters …I visited them three times before the war and, knowing the feudal set-up there, it was no surprise to learn of certain things that happened in the islands during the German Occupation.’

As the summer wore on, life gradually began to return to normal.

On Saturday 25 August 1945 the Lincolnshire Echo reported on a most significant event: ‘After five years of German bondage and 90 days of British military rule, Jersey civil authorities resumed effective control of the Island from midnight.’