Too many people – or not enough? Jersey’s population dilemma 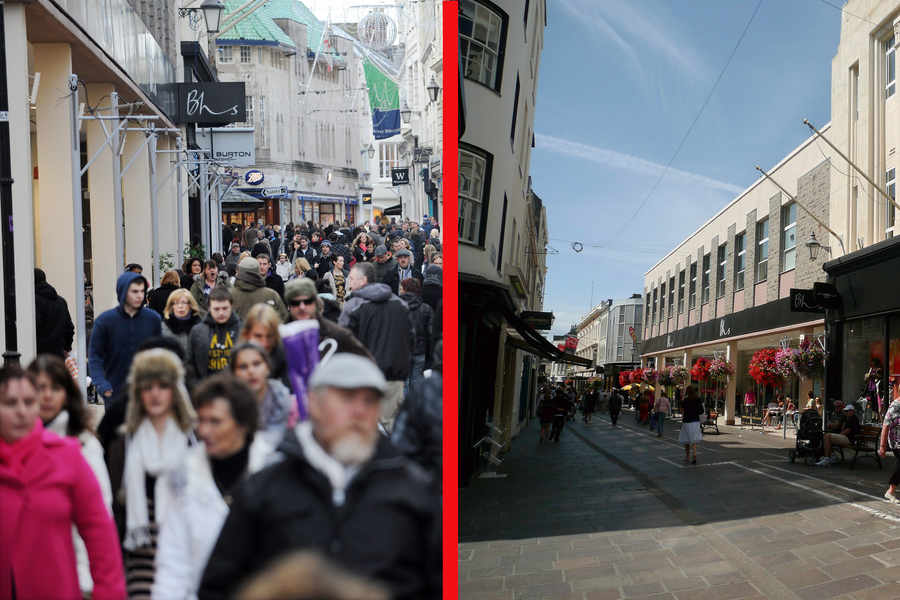 It’s fair to say that it is rare to come across anyone who thinks that Jersey is under-populated. In contrast, complaints are often made that there are too many people in this Island, too many cars on the roads, too many houses being built.

But imagine, for one moment, that instead of increasing year on year, Jersey’s population started to decline. Would we be pleased, or concerned?

The situation is not just a hypothetical one. Our sister isle, Guernsey, has just published figures which show that in the past two years there have been more departures than arrivals. Although there were more births than deaths, the overall population still declined.

During 2013 and 2014, the number of people moving away outnumbered those moving to the island by 661.

In Sark, the annual population survey carried out by Sark Electricity also shows a decrease in the resident population, from 542 at the beginning of 2014 to 492 at the start of this year.

So how does this compare to Jersey’s population trends? And what might be the impact in the longer term?

Guernsey has recently introduced a new rolling electronic census bringing together information from ten States of Guernsey databases in seven different departments. The new system will in future produce quarterly updates on population changes more cheaply and frequently than a traditional ‘physical’ census.

Initial data providing a ‘snapshot’ of the demographics on 31 March 2014, including Herm and Jethou, shows a total population of 62,711. In addition: 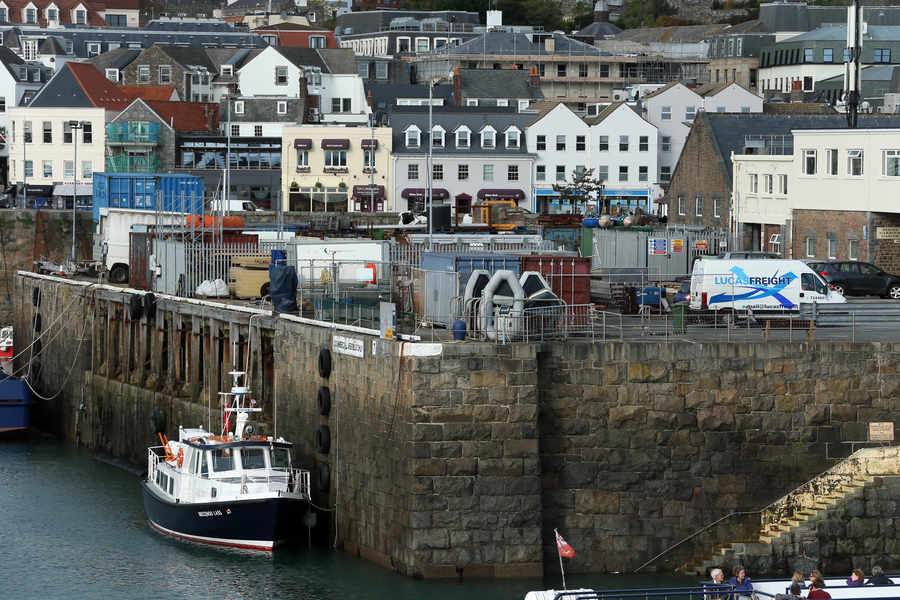 Obviously these totals can be influenced by natural causes – births and deaths. But in recent years, on average, births have exceeded deaths by between 100 to 150. Last year there were 627 births and 526 deaths – a population increase of 101.

However, the net migration – the difference between people moving to the Island (for 26 weeks or more) and away from the Island – tells a different story. Since 2008, there has been a general decline in both immigration and emigration, but in March 2013, for the first time since figures were compiled, the number of people emigrating from Guernsey was greater – by 464 – than the number of immigrants, and in the year to March 2014 net migration was minus 197.

Put into context, this is not a massive decrease. However, it is a concern for Guernsey’s chief minister, Jonathan Le Tocq, who has tasked his Treasury and Commerce and Employment departments to look at ways of reversing the decline.

‘We are talking a few hundred,’ said Mr Le Tocq. ‘It is of concern. We do need to monitor it. My feeling is that you can see what has happened in Alderney and Sark, where the economic effect there, by a decline in population, has been huge.’

An additional concern is the impact of the ageing population. Future projections for Guernsey show that based on recent historic trends and given a population of between 65,400 and 68,800, by 2040, for every 100 people of working age, there will be 76 to 80 who are either of school age or retired. This will be partly due to the impact of the ‘baby boom’ post-war generation reaching retirement, as well as increase in life expectancy. This projection includes the gradual rise in the official pensionable age, from 65 to 67. 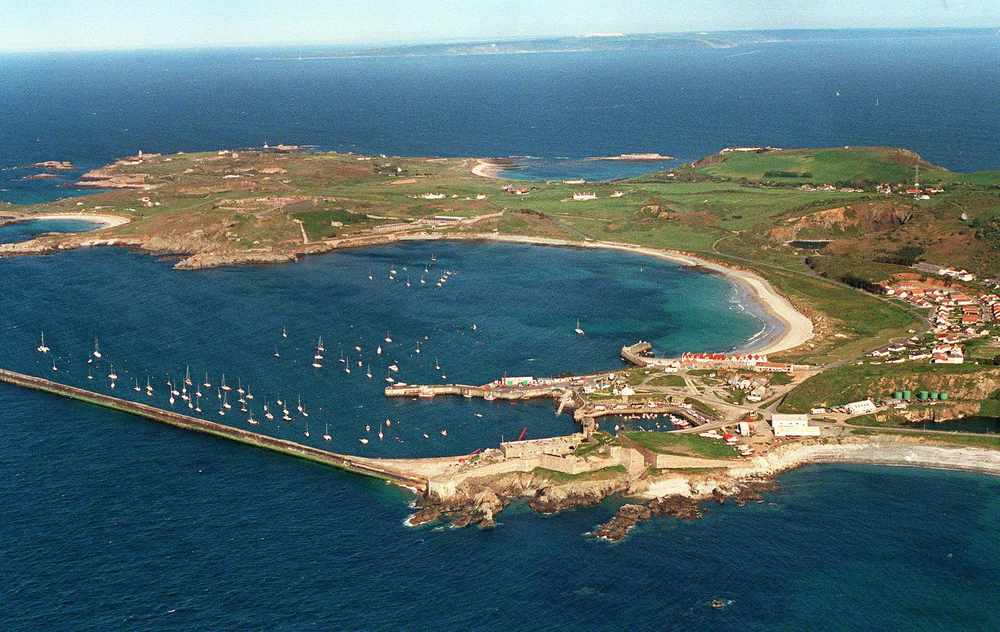 The last full Alderney census carried out in April 2013 found a resident population of 1,903 – a similar number to the population in the 1970s and down 17% on the previous census in 2001.

In the intervening period the number of children under 15 fell by 50% and young working-age people aged 20 to 39 dropped by 47%.

However, the number of people aged between 60 and 69 rose by 31% – the largest age group– with the average age of the island’s population at 51. 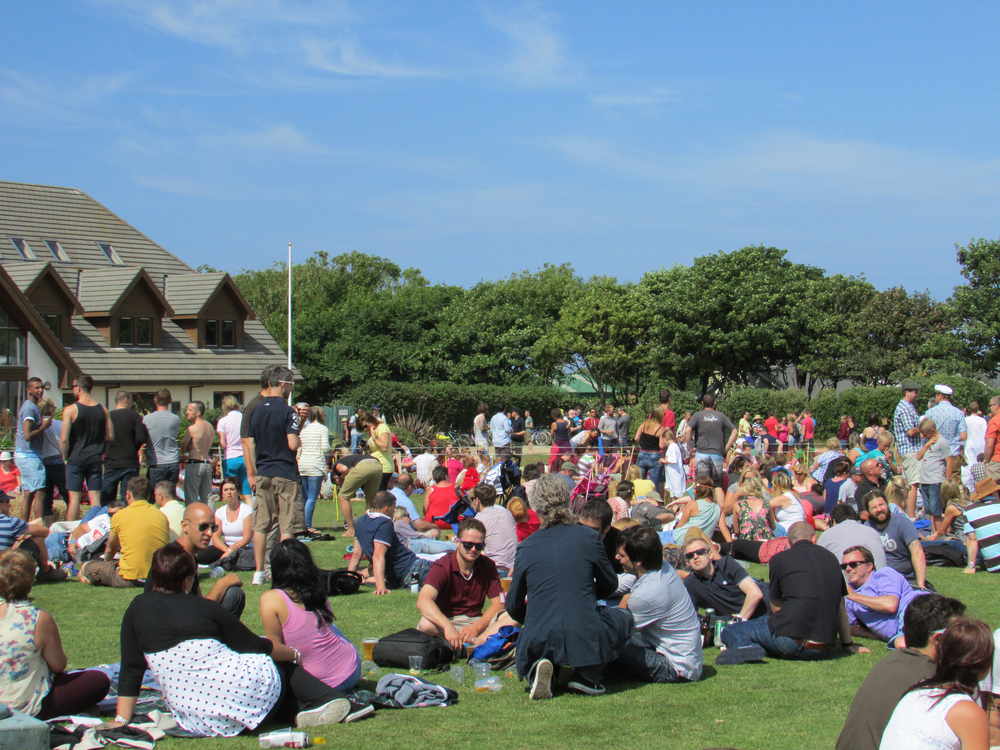 The census concluded that lack of employment opportunities was the major contributing factor to the contraction of the population, although the lack of housing restrictions and low tax rate attracted a disproportionate number of retirees.

A housing strategy report produced in March 2014 found that Alderney property sales had halved since 2007, with a quarter of the housing stock standing empty.

The island’s economic strategy is aiming to increase the size of the working population, particularly entrepreneurs, by improving transport, internet links, investment in energy and niche tourism, at a rate of around 35 households a year, to bring the population to around 2,300 over the next ten years.

The Sark Chamber notes that it is a ‘worrying trend’, both for year-round service providers and seasonal businesses. 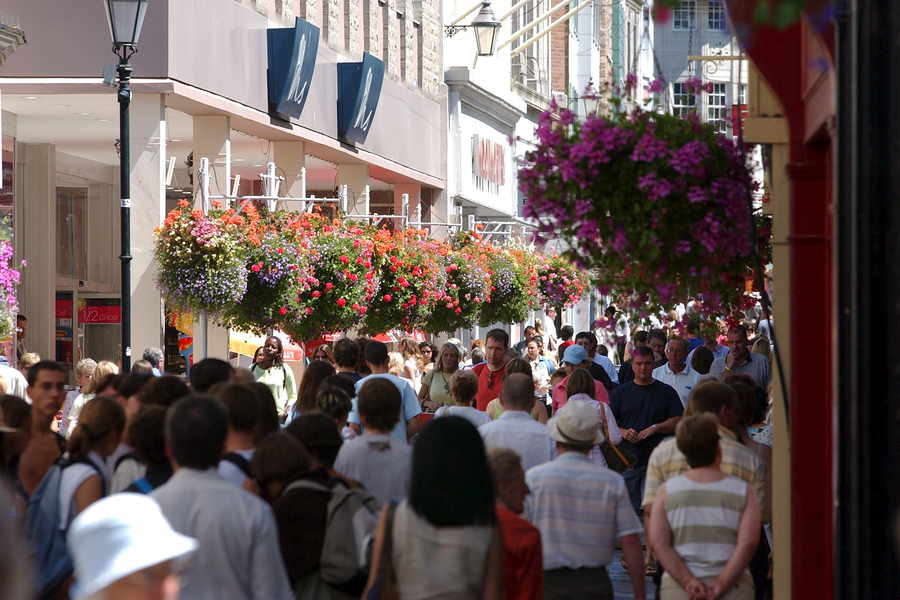 How does Jersey compare?

Unlike Guernsey, there is no recent comparative census for Jersey to provide a reference point. The last full census – when the population was 97,857 – was in 2011. The States statistics unit was unable to produce an annual population update last year because of the introduction of the Control of Housing and Work Law, which meant that the data used for the calculations were not available. The unit is hoping to bring out a new population update in June. 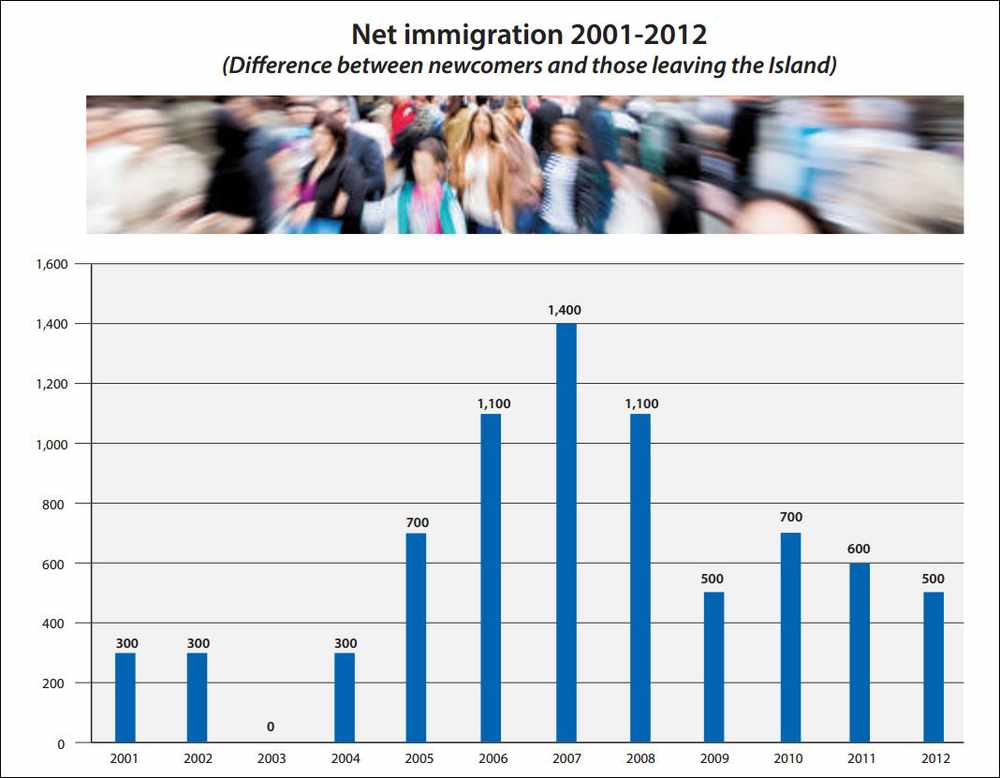 However, projections produced in 2013 suggest that the number of people now living in Jersey has already passed 100,000, given a net inward migration of 325 people a year – the target agreed last year as part of the States two-year interim population policy.

If – as in the previous four years – inward migration has exceeded the States target, with between 500 and 700 people moving to the Island permanently, then the population at the end of this year could be as high as 102,000.

According to the projections, in 25 years from now, in 2040, Jersey could be supporting a population of 125,000 or more. For every hundred people, 66 would be classed as ‘dependent’.

The statisticians have also come up with projections that might apply if Jersey’s population were to decrease by 20% per annum over the course of ten years. In 2040, the Island would have a population of 109,200, but a higher dependency ratio of 72%.

The big question: the ageing population 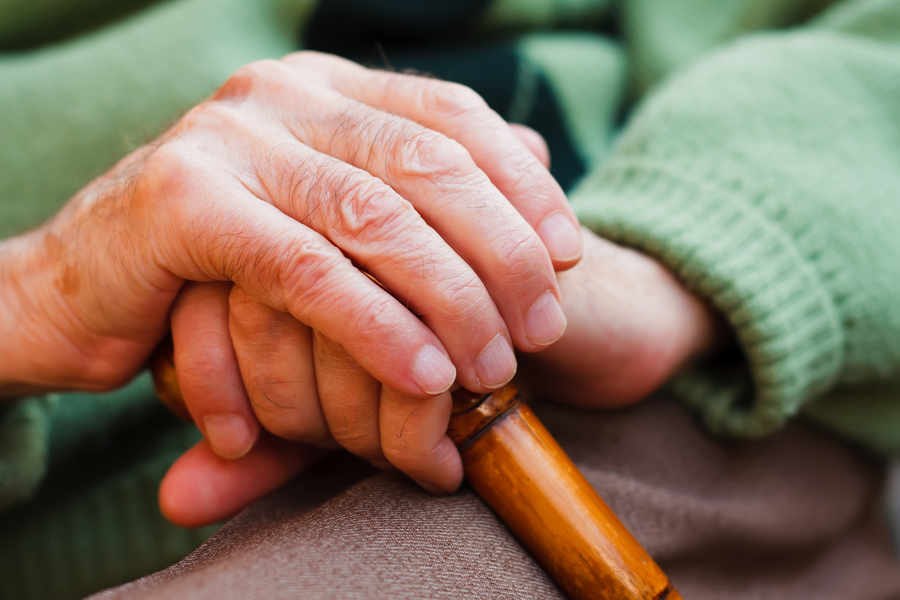 In effect, all of the Channel Islands are facing the prospect of a population that will be made up of many more retired people, compared to those of working age. That will mean more call on resources such as health and social services, more need for elderly care, more need for sheltered or appropriate housing.

Currently, Jersey’s population is being controlled by the issuing of licences to businesses, and by reducing the number of ‘unqualified’ licences that enable firms to take on migrant workers who have not lived in the Island for five years or more. But that may need to change as the Island comes to terms with the prospect of fewer workers paying for the needs of a burgeoning older population.

Alternatively, is it totally out of the question that Jersey might follow trends in fellow Channel Islands, with fewer people wanting to live and work here? That undoubtedly depends upon the future sustainability of the financial services industry, or the expansion of other high-value industries, possible technology based.

Jersey’s Council of Ministers has already flagged up population as a key factor both in the new Strategic Plan and the forthcoming Medium Term Financial Plan. Islanders are already contributing through Social Security payments to the Long Term Care Scheme.

But whether that will be sufficient to stave off future funding gaps, only time will tell. 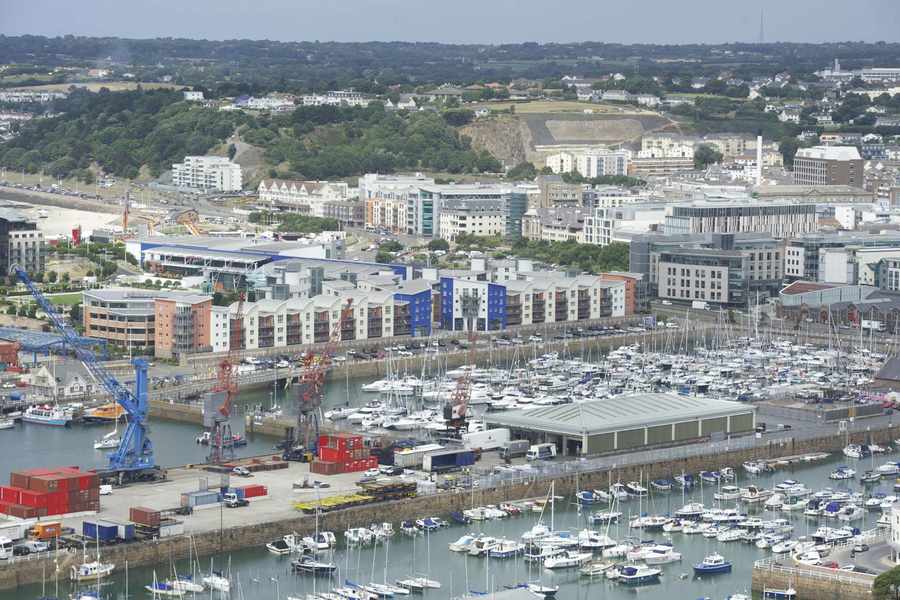 JERSEY’S population may have topped 100,000, it was reported in January.

Projections based on previous trends suggest that the population could total at least 100,850 – and may have risen to 101,000.

However, the States Statistics Unit was unable to produce its annual population update last year because of systems problems following the introduction of the new Control of Housing and Work Law, which meant that the data used for the calculations were not available.

The last time that Jersey’s resident population was assessed by the statisticians was at the end of 2012, when it was estimated to number 99,000 people – an increase of 900 on 2011.

The unit also published a population projection report in September 2013 which forecast a 2015 population of 100,900, given a net inward migration of 325 people a year – the target agreed last year as part of the States’ two-year interim population policy.