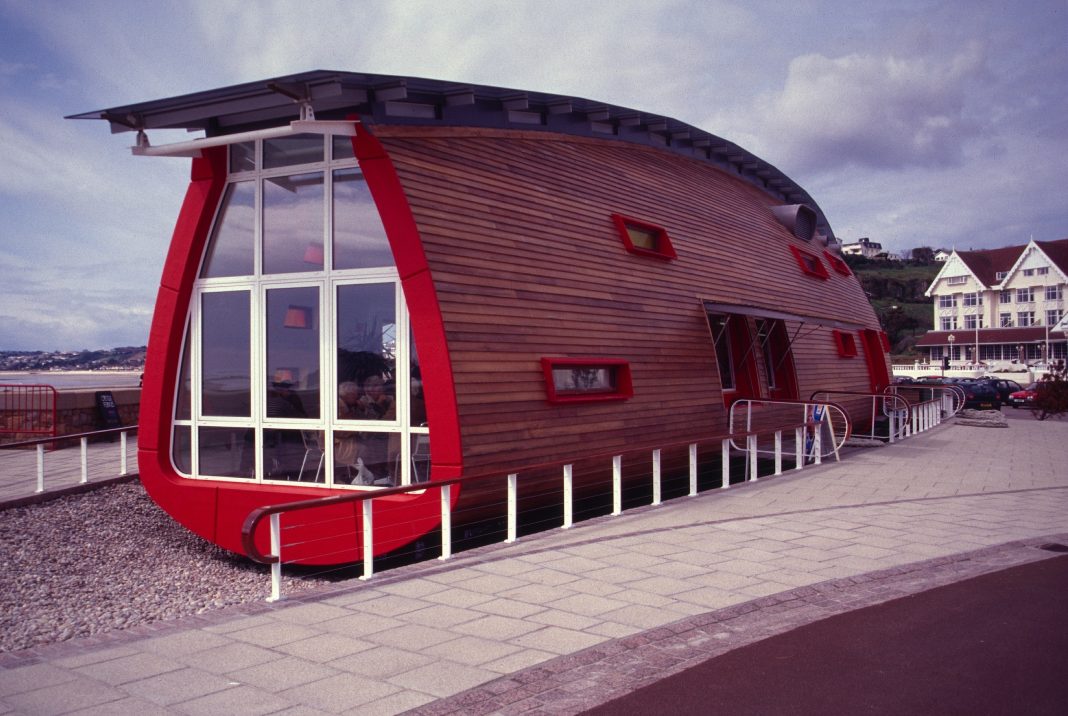 Kenneth Powell, author of books on architects including Norman Foster, Richard Rogers and Edward Cullinan ­– as well as on the man who conceived La Frégate, Will Alsop – said that he could not think of any building designed by Alsop which had been lost in such a way.

Under plans announced earlier this year, the café is due to be demolished to allow the land and sea wall to be raised as part of flood defences associated with the Jersey Development Company’s plans for the area.

‘Will Alsop was a very significant architect and anything he did was of importance. He was very inventive, sometimes unpredictable and often even outrageous, as many great architects were,’ he said, adding that consideration should be given, if necessary, to moving the café, in the same way as Alsop’s Cardiff visitor centre was dismantled and put into storage as part of the redevelopment of Cardiff Bay.

‘I have seen a photograph of the Jersey building and surely it could be relocated, if necessary. There are many precedents for that,’ Mr Powell said.

Built in 1997 for the Waterfront Enterprise Board – forerunners of the Jersey Development Company – La Frégate was intended to act as a catalyst for high-quality development on the Waterfront.

Controversial at the time, it was nonetheless regarded as architecturally important and was one of a small number of projects exhibited at the 2011 International Architecture Biennale of Sao Paulo, one of the most highly respected events in the contemporary design calendar. While The Independent acknowledged that in its early days it was ‘not much loved locally’, it said that ‘it had put Jersey for the first time on the international design map’.

Architects Derek Mason and John Leveridge of Mason Design Partnership worked in association with the Alsop and Störmer practice to develop the café, based on an informal sketch by Alsop, the award-winning architect who died in 2018 at the age of 70.

Alsop’s most famous creations include the Peckham Library, which won the 2000 Stirling Prize, the Marseille government building known as Le Grand Bleu, and the Sharp Centre for design in Toronto.

Derek Mason described La Frégate as ‘simply one of Jersey’s modern iconic buildings’. ‘So much time, thought and effort went into its design under John Scally and it has grown in popularity over the years and does not seem controversial now,’ he said, adding that it features in the Association of Jersey Architects’ recent list of key buildings created during its 60-year history.

The president of Save Jersey’s Heritage, Marcus Binney, also expressed his enthusiasm for the Jersey building, which is too recent to be considered for listing, a process which can only begin 30 years after construction.

Mr Binney compared its situation with that of the 1930s building The Barge Aground in St Ouen’s Bay, which he said had also once been offered up for demolition but was now a delight to every visitor, and booked up around the year. Of La Frégate, he said: ‘Will Alsop brought fun into British architecture and an island seaside resort should recognise this better than anyone else.’

Contacted by the JEP, a spokesperson for the Jersey Development Company said that they were not currently responding to media interest in the future of the café but that they would comment in due course when they had completed feasibility work, which they said would include an assessment of the costs of resiting the building.