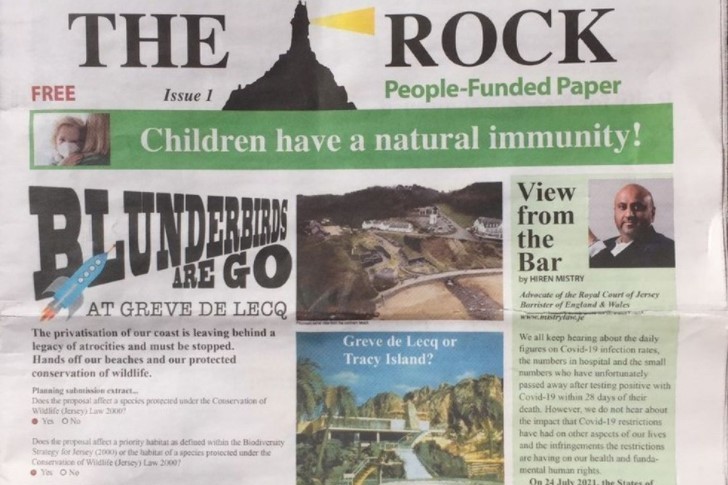 The Rock, which was delivered to homes in eight parishes by Jersey Post earlier this week, contained articles questioning the legitimacy of vaccinations, the need for restrictions and included an article entitled the ‘Nazification of the NHS’.

Jersey Post halted delivery following complaints and criticism on social media, and said they would be carrying out an internal investigation. Deputy Chief Minister Lyndon Farnham said that it was ‘concerning to hear that a publication with potential misinformation is in circulation’.

However, in a statement, the head of media and public relations for The Rock, Claire Stone, said that it was of ‘great concern’ that circulation had been ‘unilaterally’ stopped by the postal company.

She said: ‘Freedom of speech and freedom of expression are fundamental freedoms that all of us enjoy, and as such, they have been enshrined in law.

‘Why is the government launching a probe, and on what grounds is it doing so? The real question here is how can such enshrined freedoms be taken away so lightly?’

The Postal Services (Jersey) Law 2004 outlines material that should not be posted which includes ‘anything that may harm persons’ or ‘contains anything indecent, obscene or grossly offensive’.

Ms Stone added: ‘If the material contained in The Rock falls within these categories, it is for the people asserting this to prove it under the law, not for a small number of complaints to trigger the banning of delivery of The Rock.

‘The backers of The Rock take their freedom of expression very seriously, and it does seem very strange that across the world the press have taken a one-sided approach to the issue of Covid-19.’

She added that the newspaper had ‘tried to give an alternative voice to the Covid-19 debate’ and accused Jersey Post of attempting to silence ‘any voice other than those supporting the flagrant breaches of our human rights and civil liberties’.

Earlier this week reality television star Hedi Green – who appeared in The Real Housewives of Jersey – said she was one of more than 100 people who were involved in The Rock’s publication.

The JEP understands that those behind the newspaper are planning to give out more copies in St Helier this week.