Hidden inside a Smith’s glass bottle and penned on an old Cawley Bros Limited of Halkett Street cake box, the message – dated September 1938 – appealed for its finder to get in touch with its writer John Stapleford at an address in Barnet, Hertfordshire.

Islander Carol Hatter (75), the wife of John Hatter (80), who is the the nephew of Mr Stapleford, told the JEP last week that the couple believe the note was written by the former accountant and civil servant when he was in the Island with his wife Nell (née Hatter) to celebrate the wedding of her brother Cecil and Muriel Larbalestier at St Luke’s Church.

Mrs Hatter said Mr Stapleford was named John but was known to friends and family as Jack. He was born in 1890 and died in 1980, aged 91. The note was signed using the name John. 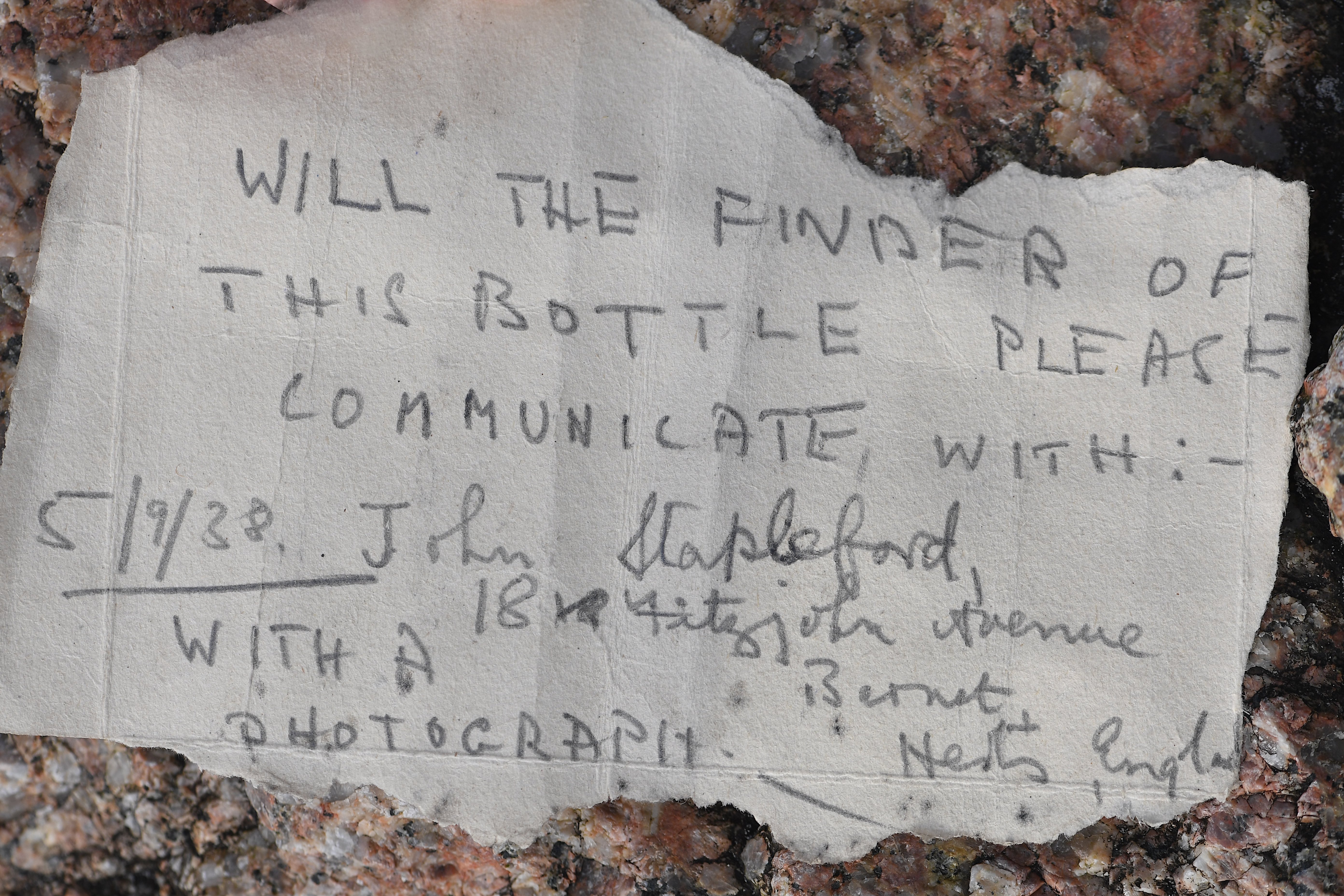 The tale has attracted national and international media attention, and that has now led to another twist – and a permanent home for the bottle and its message.

The bottle’s finder, Nigel Hill (55), said one theory now is that the note was not written by John ‘Jack’ Stapleford at all – but his son, who was also called John. Mr Hill said that after the story appeared in national newspapers, the daughter of John junior, who died in 1994, got in touch.

Mr Hill said: ‘We now believe that it was actually Jack’s son John Stapleford, born in 1924, who also attended the wedding with his parents, and would have been 14 at the time, who wrote the note, put it in the Smith’s bottle and chucked it in the sea.

‘It’s likely the family came by sea (they lived at the address in Barnet, Hertforshire) from Weymouth on either the St Julien or the St Helier; steam ships running the route to the Channel Islands in those days. Possibly John ate his cake from Cawleys in Halkett Street, and then wondered what to do with the box and the bottle. I guess we’ll never know.

‘We do know that his daughter picked up the story from the national media and verified his handwriting as well as confirming her identity with a practicing genealogist. She also mentioned to me that John had a full and long career at sea, serving in the Merchant Navy. John sadly passed away in 1994 leaving a daughter and a son.’

Mr Hill added: ‘What a nice conclusion to a very nostalgic and romantic story. I am staggered by the local and national interest but also overwhelmed by the help I have received.

‘I want to personally thank all the Jersey people for their messages and assistance, as well as the technical assistance I received in genealogy from the UK.

‘I’ll post the bottle and the note to John’s daughter next week. I know the story will live on in the family for generations and the note will make a fabulous family heirloom.’