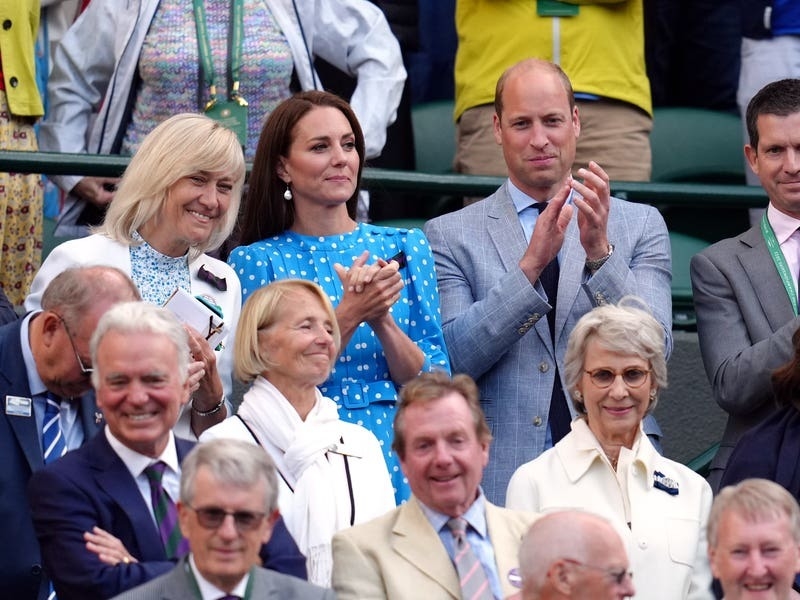 The Duke and Duchess of Cambridge have hailed Cameron Norrie as “brilliant” after his quarter-final triumph at Wimbledon.

William and Kate, who is patron of the All England Club, cheered on the British player from the stands at No 1 Court on Tuesday as he beat Belgium’s David Goffin in a dramatic five-set quarter-finals match.

The duke and duchess tweeted a picture of the 26-year-old pumping his fist on the court, with the caption: “What a match! Just brilliant @cam_norrie”.

They later added: “What a day of tennis! Fantastic to be back @Wimbledon today and wonderful to see @Cam_Norrie flying the flag in the singles!”

The ninth seed twice recovered from a set down to claim a 3-6 7-5 2-6 6-3 7-5 victory on a raucous No 1 Court and become only the fourth British man in the Open era to reach the last four at the All England Club.

Norrie clinched victory on his second match point, raising his arms aloft when Goffin netted a forehand after three hours and 28 minutes.

Crowds on Murray Mound, which fans are now suggesting should be dubbed “Norrie Knoll”, roared at every point the British player won during the final game of the match and gasped when he lost.

He later told the PA news agency he wants to see him in the final.

His friend Rina Dhillan, 53, from near Cambridge, said they jumped up and screamed when Norrie won.

She said it was also “amazing” to see the Duke and Duchess of Cambridge and Tim Henman watching too.

Norrie-mania reached fever pitch as crowds yelled and chanted: “We love you Norrie” at the tennis player as he spoke to broadcasters on the balcony of Millennium House.

Laura Folkes, 34, from Herefordshire, who watched the match from The Hill, said she was “outrageously happy”.

Her friend Alex Wrixon, 37, said: “It took Cam Norrie quite a long time to get the crowd on the hill onside but when he did, it made it all the better. It was superb – great performance.”

Julia Tustian, 42, from Fulham, west London, said she jumped in the car with her family when Norrie won his first set and went to the SW19 grounds to watch the match on The Hill.

She took her sons Jack, five, and Fred, four, for the “historic” moment even though it is a school night.

Ms Tustian said the win was “literally epic”, adding: “It is an historic moment.”

“We are over the moon that we got here,” she said. “We’ve let the boys stay up to watch it but so what? It’s a great moment.”

“I think you have to be able to hear (the crowd) from court one. The reaction on the hill has to carry you forward,” Ms Jones said.

Ms Simeone added: “We want Norrie not only in the semis but we want him in the finals.

“He’s got to get there. From Murray Mound – Norrie Knoll is the future now. We need someone to take it forward and Norrie is the one.”

“I was inside and I think I was one of maybe a handful of people supporting Goffin – I just felt he needed a little bit of support.

A group of five Nottingham University medical students, who said they had skipped classes to join the queue and cheer on the British player, joked that they watched the match on “Norrie Knoll”.

Charlotte Petter, 21, said: “Everyone’s on their feet, everyone just jumped up. It was emotional, lots of tears as well.”

On his upcoming semi-final match against Novak Djokovic, her friend Esme Bliss, 22, said: “We got to back him but also it’s going to be a big match.”

Todd Currey, 51, and his fiance Alison Thomey, 44, from Atlanta in the US, who watched the match on No 1 Court, said it was “so much fun”.

“He’s really seriously upped his game so that was good to see,” Mr Currey added.

Of the atmosphere on No 1 Court during the game, he said: “It just kept building and building.

“The spirit got bigger and bigger so it was so great. We could not stop clapping.”