Another milestone for Harry Kane as Tottenham beat Brighton 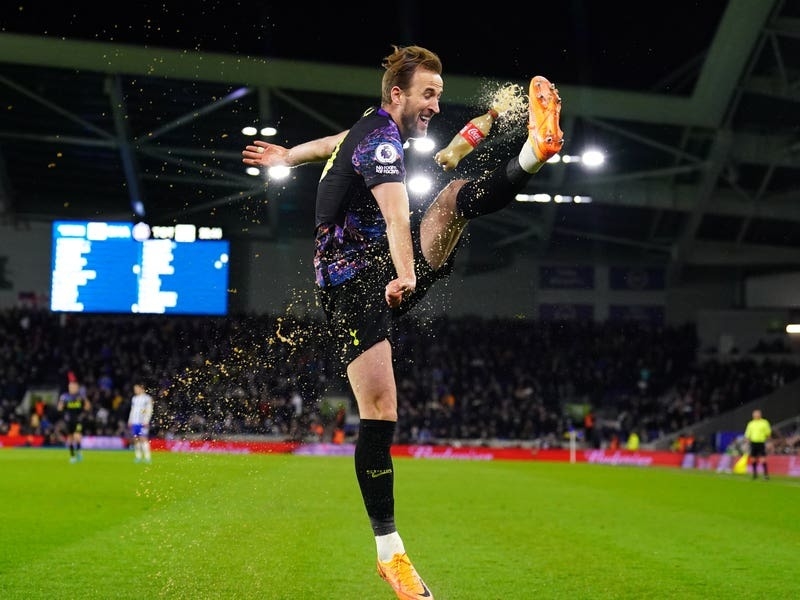 Harry Kane created a slice of Premier League history as he helped Tottenham to a 2-0 win at free-falling Brighton.

After Cristian Romero had put Spurs in front before the break, Kane entered the record books just before the hour by scoring his 95th goal away from home – more than any other player.

He also moved above Frank Lampard in the list of all-time scorers, going into fifth with 178 goals and more records are surely around the corner given the England’s captain devastating prowess.

It was his seventh strike in six Premier League games and helped keep Spurs in the race for the top four, though they remain big outsiders as they are still behind Arsenal, who have two games in hand.

Brighton played well in patches but their slide continued as this was a sixth successive defeat and the game against Norwich takes on extra significance ahead of a trio of away matches against Arsenal, Spurs and Manchester City.

They have probably already amassed enough points to avoid getting dragged into a relegation fight, but their form will be a concern for Graham Potter.

Spurs had an early opportunity to take control of the match but Kane was uncharacteristically wasteful after creating his own chance.

He blocked Robert Sanchez’s attempted clearance after the goalkeeper was caught dawdling in possession and the ball ran free, but Kane could not convert into an open goal from an acute angle.

But the visitors forged ahead in the 37th minute, though needed a large slice of luck.

Son Heung-min fed Dejan Kulusevski on the edge of the area and the Swede’s shot took a heavy deflection off team-mate Romero, wrongfooting Sanchez and heading into the bottom corner.

It should have been 2-0 moments later as Shane Duffy messed up a header, allowing Kulusevski to race through on goal, but he shot straight at the legs of Sanchez and Brighton survived.

Brighton started the second half searching for a response, but Spurs killed the game just before the hour with a devastating counter attack.

Kane’s creativity is just as big a part as his goalscoring and he should have had an assist in the 72nd minute as his inch-perfect pass set Sergio Reguilon clear, but the Spanish wing-back shot straight at Sanchez.

A Brighton goal could have made the last 15 minutes nervy for Spurs and they went close as Marc Cucurella fizzed an effort just wide of the post, while Ben Davies produced a fine last-ditch tackle.

Kane could have put the icing on the cake at the death but Sanchez was equal to his shot from the edge of the area as Antonio Conte’s men eased to the three points.