Football-mad Evie, 8, ‘over the moon’ to be gifted Euro tickets by stranger 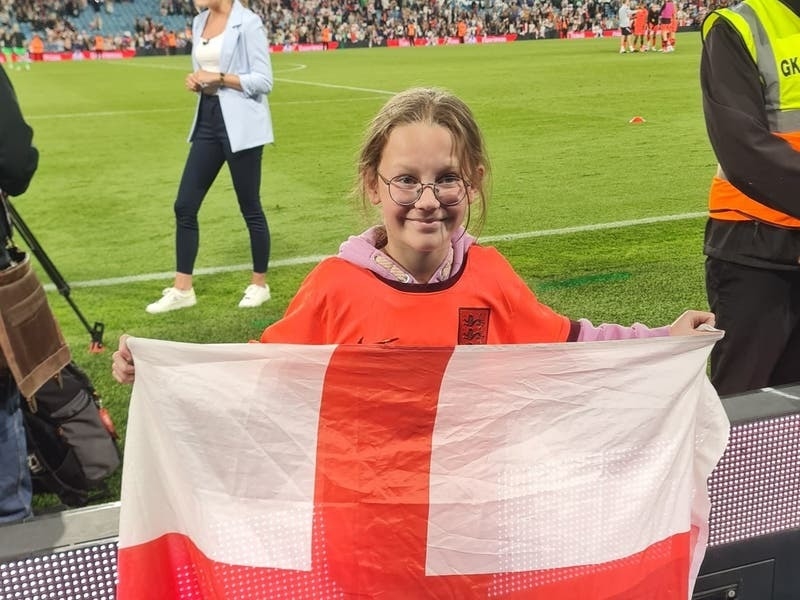 An eight-year-old football fan who has been gifted a ticket for the European Championship Final said she feels “really lucky” after watching the Lionesses “inspire a lot young girls” across the country.

A keen goalkeeper for her local team, Evie Jackson, and her father, Matt, 30, have been avidly following the tournament after making trips to Leeds United’s Elland Road and St George’s Park to see England play.

Mr Jackson appealed on Twitter to find tickets for the anticipated final against Germany at Wembley on Sunday and said he had nearly given up hope when a stranger contacted him to offer two tickets free of charge.

“I feel really lucky and I didn’t know what was happening because I thought it was going to be fake,” Evie, who lives with her father in Leigh, near Manchester, told the PA news agency.

“I was so excited when I heard that we got the tickets, I was crying because I thought that we wouldn’t have been able to go.

“It also inspires a lot of young girls that might want to play football but might not feel confident, now they have a chance.”

“Why would somebody do that?” he said.

“As soon as we got off the phone, he said, ‘send me your email address and I’ll transfer the tickets over the app’. And within a couple of minutes, there they were.

“They were category one tickets, as well, which is the dearest ones you can get. Even now, I’m pinching myself, like, did that actually happen?”

Mr Jackson said he was “pretty overwhelmed” by the man’s generosity, who he explained had sold football tickets a few years ago and making money from them “didn’t really leave him feeling very fulfilled”.

“For a guy that you’ve never even met before to give you tickets, going for hundreds, maybe, thousands online, some of the best tickets you can probably get, I’m just really humbled and my daughter is absolutely over the moon,” he said.

“Obviously, it’s more for Evie and the experience that I know that she’ll have.”

“I’d already sat her down that day and said, ‘Look, I’ve done everything I can, I’ve tried my best, I’m really sorry but it’s just not possible’,” he said.

“(When showing her the tickets), she thought I was lying to her because you know how clever kids are these days. I showed her the pictures and she was like, ‘that could be a screenshot of anything, dad’.

“And then she just jumps on the floor and nearly burst out crying, screaming with excitement.

“I don’t think it’s really sunk in for her much yet, she’s never been to Wembley.

“When we’re walking down Wembley way, in terms of football I don’t think there’s anything bigger than going to watch your heroes in a final at Wembley.”

The act of kindness has “restored faith in humanity” for Mr Jackson, who said the tournament has had a huge effect on Evie’s team and their enjoyment of the sport.

“All the girls at training last night are just really into it so much. They’re all watching the games, they all want to know who we’re playing, they’re all talking about who their favourite players are,” he said.

“I’d probably say a couple of years back, you wouldn’t even (have) known who any of the players are, but they’ve become household names more or less overnight.”

“For people to be saying, ‘Look, I can’t get a ticket to a women’s national game now’ just shows how far the sport has come probably even these last three weeks.”

Evie added she is particularly excited to see one of her favourite players, Ella Toone, who used to play for Evie’s team when she was a young girl.

She and her father have a hotel booked for Sunday and are confident the Lionesses will emerge victorious.

‘The club taught me not to be ashamed of our differences’