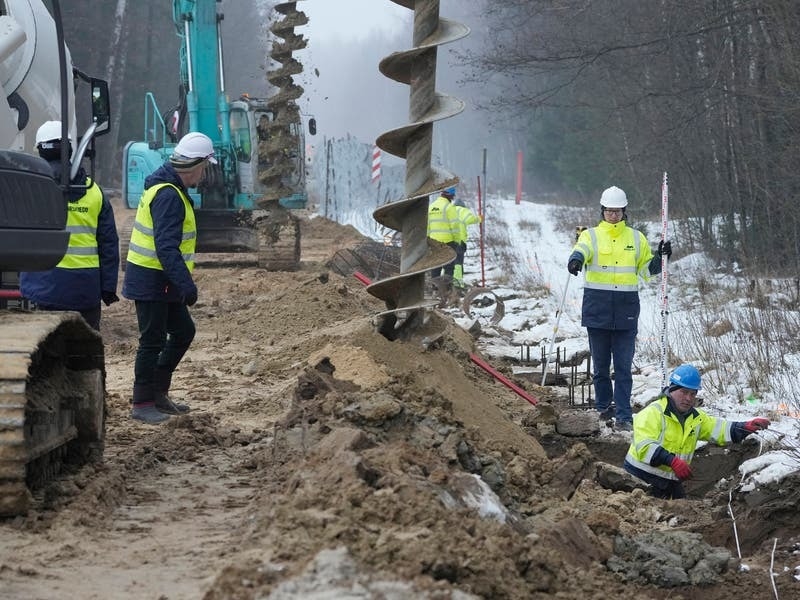 Construction workers with heavy machinery have started work on Poland’s border on a £394 million wall to stop migrants pushed across by Belarus in what the European Union calls a “hybrid attack”.

Reporters were allowed to see the work in the village of Tolcza, near the closed border crossing of Kuznica in eastern Poland.

Border guards and the military patrolled as excavators and cranes prepared the ground for the metal wall that Poland’s right-wing government says will serve the interests of all of the EU.

The 18ft-high metal wall topped with barbed wire will run more than 115 miles along the land part of the border, which also includes the Bug River. Cameras and electronic alarm systems will be added.

Two construction companies will work around the clock, and it is due to be completed in June, at a cost of 1.6 billion zlotys (£294 million).

Pressure from thousands of migrants from the Middle East and Africa on Poland and Lithuania’s wooded borders with Belarus began in the summer, leading to clashes with Poland’s border guards.

The migrants are mostly heading for Germany.

Last year, Lithuania started building a wall on its frontier with Belarus, while Poland sealed its border with Belarus using razor wire, increased the number of guards and restricted access to the frontier.

The EU says the migrants are being used by Belarus’s authoritarian leader to destabilise the 27-member bloc in retaliation for its sanctions on Minsk following an election widely seen as rigged and a clampdown on opposition protests.

Critics and environmentalists say the wall will fail to stop migrants, but will harm one of Europe’s last pristine woodlands, the Bialowieza forest.

Natalia Gebert, from the Grupa Granica (Border Group) that brings aid to migrants and asylum-seekers in Poland, says the wall “stops only the disabled, the weak, the sick”.

“It doesn’t stop desperate people who are fleeing danger from trying to cross,” she told the Associated Press.

She said that in the first three weeks of 2022 the group received requests for help from nearly 350 people, including 51 children.

Kalina Czwarnog of the Ocalenie (Deliverance) Foundation said the money for the wall could be better spent on ways of managing migration in a “humanitarian way and in line with international law”.