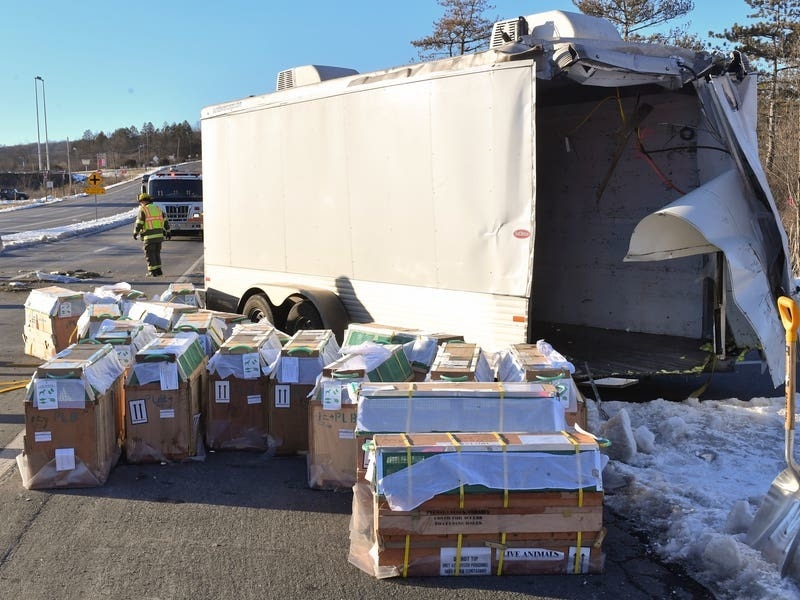 Residents of a town in Pennsylvania in the US have been warned not to approach a monkey that was missing after a crash involving a lorry towing a trailer taking about 100 of the animals to a laboratory.

Police urged people not to look for or capture the cynomolgus monkey after the crash on Friday in Montour county.

“Anyone who sees or locates the monkey is asked not to approach, attempt to catch, or come in contact with the monkey. Please call 911 immediately,” troopers tweeted.

Several monkeys escaped after the crash between the lorry and a rubbish truck, but as of Saturday only one remained unaccounted for, officials said.

The Pennsylvania Game Commission and other agencies searched for it amid freezing weather.

The lorry had been on its way to a laboratory, Trooper Andrea Pelachick told The Daily Item newspaper of Sunbury.

The location of the lab and the type of research for which the monkeys were destined were not clear, but cynomolgus monkeys are often used in medical studies.

A paper posted on the website of the National Centre for Biotechnology Information referred to them as the most widely used primate in preclinical toxicology studies.

The condition and whereabouts of the remaining monkeys were not clear Saturday.

Crates littered the road on Friday as police searched for monkeys, rifles in hand.

Firefighters used thermal imaging to try to locate the animals, and a helicopter also assisted, the Press Enterprise newspaper of Bloomsburg reported.