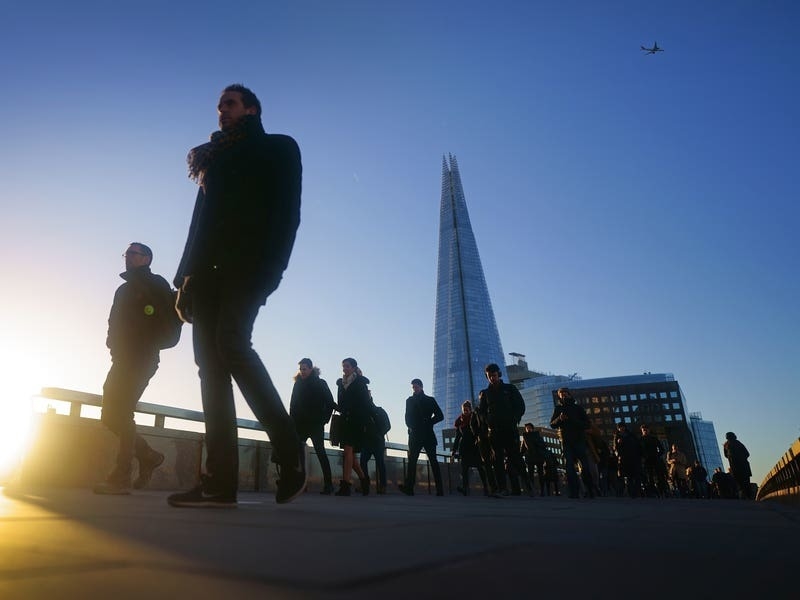 The UK economy grew slightly over the second quarter after a previously predicted decline was revised by the Office for National Statistics (ONS).

It means that the UK might not currently be in recession, as was predicted by the Bank of England earlier this month.

A technical recession is when the economy witnesses two consecutive quarters of decline.

The refreshed data from the ONS also revealed on Friday that the size of the economy is still below pre-pandemic levels, contrary to previous estimates.

It had previously estimated that the economy shrank by 0.1% over the period.

Based on this previous guidance, the Bank of England implied the UK was likely to currently be in recession as it forecast another decline, of 0.2%, for the three months to September, in its Monetary Policy Committee meeting earlier this month.

However, the new figures from the ONS mean that, even if the economy declines as predicted this quarter, it will not yet be in recession.

The ONS said this was driven by upwards improvements for the health and financial sectors.

“They also show that, while household savings fell back in the most recent quarter, households saved more than we previously estimated during and after the pandemic.”

However, the new figures showed that, despite growth in the latest quarter, the economy as a whole is smaller than previously predicted.

Economists said they believe overall GDP is now 0.2% below pre-pandemic levels, having previously said they thought it was 0.6% bigger than before Covid-19 struck.

“Overall, these new figures show that the economy was slightly smaller than our previous estimate, and in the second quarter was a little below its level when the pandemic struck, as the economy shrank more than we first estimated during the early months of the pandemic but rebounded more strongly in the latter half of 2021,” said Mr Fitzner.

The ONS revision means that GDP sank by 11% in 2020 following the economic toll of the pandemic, having previously reported a 9.3% decline.

This means that the collapse in GDP was the biggest annual fall since the Great Frost of 1709.

Before Friday’s revision, 2020’s contraction was considered the largest since 1921, when the economy was estimated to have shrunk by around 10%.

Samuel Tombs, chief UK economist at Pantheon Macroeconomics, said: “The downturn in economic activity during 2020 looks even worse than previously thought, and the subsequent recovery even weaker, following the latest set of national accounts revisions.

“These revisions will compel the OBR (Office for Budget Responsibility) to revise down further its estimates for future potential GDP, though as they also imply that the tax-to-GDP ratio is higher than previously estimated, the impact on the public finances should be modest.”