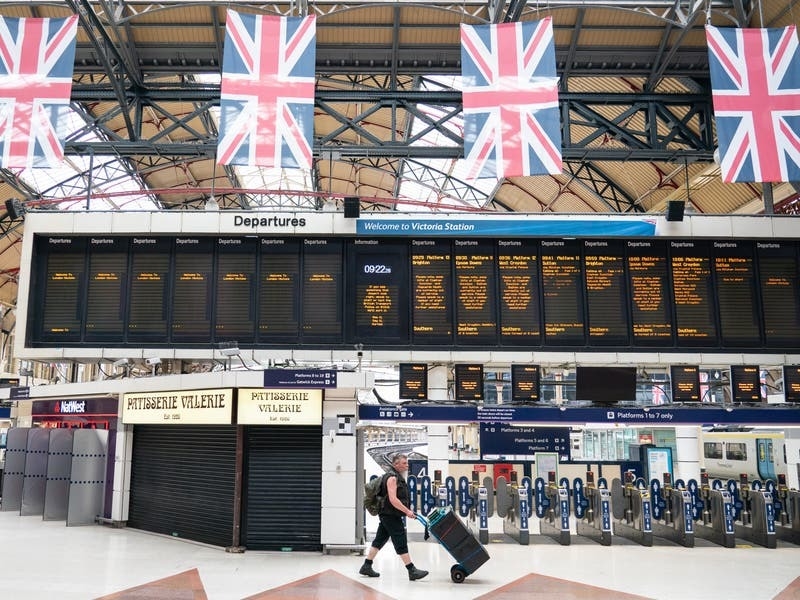 Major railway stations are much quieter than normal as services were crippled by thousands of railway workers staging their second strike of the week.

Edinburgh Waverley, London Euston, London Paddington and Liverpool Lime Street are among the stations with much fewer passengers than a typical weekday.

Around 40,000 members of the Rail, Maritime and Transport (RMT) union at Network Rail and 13 train operators walked out again on Thursday after talks failed to resolve a bitter row over pay, jobs and conditions.

The Prime Minister said: “I just think it is important to remember that these strikes are unnecessary.

“I think people should get around the table and sort it out.”

He added: “This is a Government that is investing more in railways than any previous Government in the last 50 years.”

Just one in five trains are running, and they are mostly restricted to main lines, with around half of the network closed.

Services started later than normal at 7.30am and will shut down early at 6.30pm.

Members of the drivers’ union Aslef on Greater Anglia are also striking on Thursday in a separate dispute over pay.

The company is advising passengers to travel only if necessary.

The Government said the legislation will repeal the “burdensome” legal restrictions, giving companies affected by strike action the freedom to tap into the services of employment businesses which can provide skilled, temporary agency staff at short notice.

Network Rail welcomed the move but Labour and unions condemned it as a “recipe for disaster”.

But a crowds of holidaymakers fretted about missing their flights as train delays left them stuck at London Liverpool Street station.

One man, who was returning to Sofia in Bulgaria after three days in London, complained that the experience was “stressful”.

Asked how much longer he expected to wait, the man – who had been stranded at the station for half an hour – said: “I don’t know, I’m just looking at the board, I hope not too long.”

“The look and feel of the network is that traffic numbers are down,” he told the PA news agency.

“If you’re going in and out of town and city centres, they’re a little bit busier.”

“People are still able to carry on working even though the rail dispute is ongoing.”

Location technology firm TomTom said the level of road congestion in London at 9am was 83%, compared with 75% at the same time last week.

The figures reflect the proportion of additional time required for journeys compared with free-flow conditions.

Steve Montgomery, who chairs the Rail Delivery Group, which represents train operators, was asked why rail workers are not being given a guarantee that reforms will not lead to compulsory redundancies.

He told BBC Breakfast that will depend on the extent of reforms, the popularity of voluntary severance schemes and how many workers can be retrained.

“So, we just need to get through the processes and see how many people are left, and hopefully nobody requires to be made compulsory redundant.”

The RMT accused Transport Secretary Grant Shapps of “wrecking” negotiations by not allowing Network Rail to withdraw their letter “threatening redundancy for 2,900 of our members”.

Mr Shapps hit back, saying the RMT claim was a “lie”.

Kevin Groves, head of media at Network Rail, told Times Radio Breakfast: “Negotiation is about give and take, and at the moment the RMT are just take, take, take.

“We’re talking about the modernisation of working practices that are archaic.”

He told the PA news agency: “They understand it’s a scandal that billions are being ripped out of our industry at the same time workers are being punished.

“We think there’s going to be more demands for increases in pay in the economy and we think that’s right.

“It’s about time Britain had a pay rise. Wages have been falling for 30 years and corporate profits have been going through the roof.”