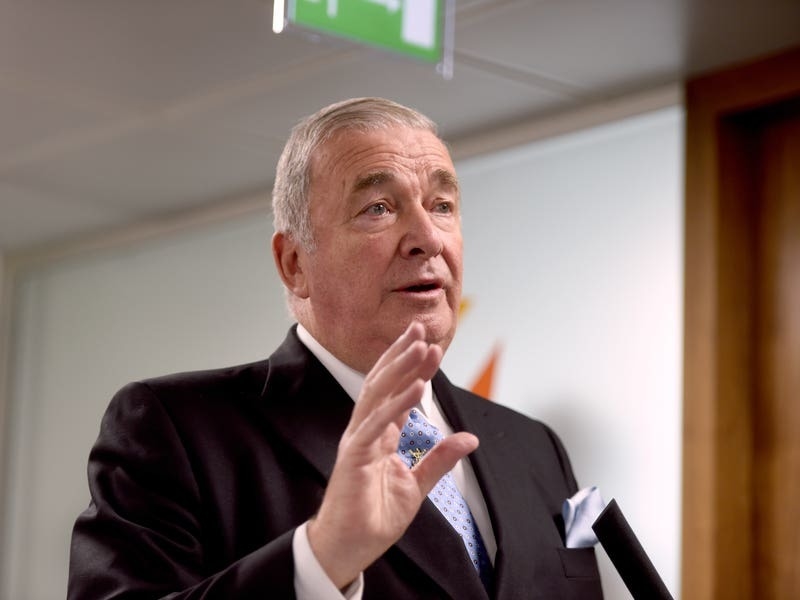 Four decades since the Royal Navy ship he captained was sunk during the Falklands War, Admiral Lord West of Spithead still retains a close bond with the families of those who served and were lost on board HMS Ardent.

The former First Sea Lord describes how he wrote letters to the next of kin, “mothers and wives of the chaps who died”, adding “if there was a child, a young child, I wrote a letter for them to open when they were 18 about their father”.

Annual gatherings in Plymouth of the HMS Ardent Association, of which he is president, now span the next generations.

Lord West, who won a Distinguished Service Cross (DSC) for his actions on May 21 and 22, 1982, told the PA news agency how he once received a card from a young girl “explaining what her boyfriend was like and that her father had been in the ship and explaining what he was like and did I think she should get married because her father had been killed in the ship and wasn’t there to advise”.

He said: “One of the joys of my ship was it had a mark eight gun which has a good long range and is very accurate and quick firing and so that’s quite useful in naval gunfire support.”

He added: “We led the invasion force into Falkland Sound because we had to get down south in Grantham Sound, an area just off Falkland Sound, so we could bombard Goose Green, because special forces were doing an attack there and needed support as a diversionary raid to the main landing.

“It was a beautiful clear day, lovely clear day, the night before had been very misty and foggy which was rather nice, we preferred that really… We started firing in support, we fired 170 rounds or so and that job was done and then the first raids came in from the Argentinian mainland.”

His vessel sustained serious damage from the incoming waves of air attacks.

Lord West said: “We were under attack for most of daylight, we had 17 air attacks on my ship. We ceased doing the naval gunfire support and we were asked to move into the middle of the Sound to help split air raids coming up from the south.

“We were straddled by a bomb and we were then hit overall by seven bombs and I lost all power and way and was running towards the shore and I stopped the engines and I slipped an anchor.

“It was just getting dark, some people were in the water, we were picked up, a lot us by HMS Yarmouth and we were taken to the Canberra who had come into the landing zone.”

Describing the impact of the air raids, he said: “One of the bombs which hit, blew my Seacat missile system about 80 feet into the air and it came down and landed on the flight deck and sadly fatally injured my flight deck officer, supply officer.

“Another one destroyed the Lynx helicopter that was on the flight deck and blew the flight deck up. Another bomb went in and took the top off one of the fuel tanks which all caught fire and basically killed all the damage control people who were busy trying to fight a fire there already. The bomb came in and killed all of them except for two of them.”

Speaking of his feelings for his crew, he said: “You’re trained aren’t you, you feel responsible for them, they’re your people, they’re your boys and you try and do the best you can with your ship.”

He added: “It was frightening, of course it was frightening for people, we just got on and did the things we needed to do. We were very lucky really that out of my 204 people only 22 were killed, it could have been a lot more.”

On return to the UK he and his crew were met in the Solent by the Royal Yacht which had the Queen Mother on board to welcome them.

Lord West said receiving the DSC meant a “great deal” adding it was a “reflection of what all my boys had done in the ship”.

“I still sometimes wake up because I’ve been thinking about it at night. There’s no doubt for the first couple of years after the event, one used to have nightmares all the time about what had happened. What if I had done this?”

The “thin grey line” of frigates and destroyers, he said, “stopped the Argentinian air force attacking and sinking the amphibious ships and killing the marines and paratroopers”.

He said: “Once we’d actually landed those men and they were all there safely ashore with all their equipment we were going to win.”

Lord West, a former Home Office minister under Gordon Brown, described the British action in the Falkland Islands following the Argentinian invasion as an “incredible achievement”.

He said: “I think the Falklands must be the closest to a just war that there’s been since the Second World War.”

He added: “Could we retake it if they (Argentina) took it over? I think now we’ve got two aircraft carriers, yes.”

The importance of defence investment is one of the key lessons from the Falklands, he said: “What it teaches you is, you’ve got to be absolutely clear about this and not give mixed messages and not make cuts to your armed forces when you’ve got people out there who are willing to fight you.

“We’ve made exactly the same mistake with Russia over the last 10 years and with the Ukraine.”

Asked if current defence spending was sufficient, he said “absolutely not”.

He said: “It is a terrible, terrible error. To actually have a war and not spend money on your armed forces, it’s sort of counter-intuitive, it’s just mind boggling.”