NHS pay rise: Who decides what nurses should be paid? 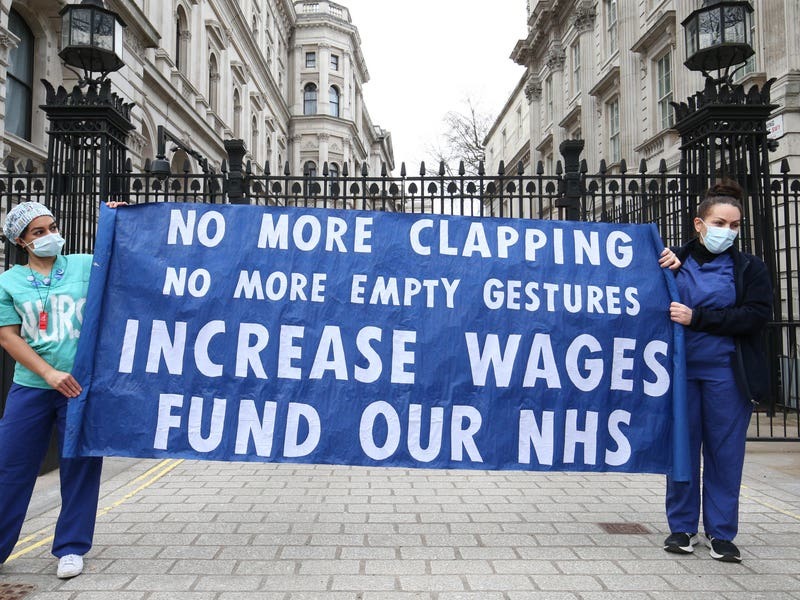 A 3% pay rise for NHS staff in England is recognition “for their pandemic contribution during an unprecedented year” the Government has said, but the uplift has proved controversial.

Health Secretary Sajid Javid said the pay rise was despite a wider public sector pay pause, but Labour and unions have been quick to condemn the move.

Here, the PA news agency answers some key questions around the offer:

The Department for Health and Social Care (DHSC) said it had accepted recommendations of independent review bodies and would be giving NHS staff in England a 3% pay rise backdated to April.

It means the “average nurse” will receive an additional £1,000 a year, while many porters and cleaners will get around £540, the DHSC said.

In a statement, minister for Care Helen Whately said: “Our NHS staff have worked incredibly hard to fight the pandemic for over eighteen months and I’m glad to confirm we are accepting the pay review bodies’ recommendations in full this year, so staff in their remit will receive a 3% pay rise.”

– How is NHS pay decided?

Independent bodies – the NHS Pay Review Body and the Review Body for Doctors’ and Dentists’ Renumeration – make non-binding recommendations to the Government, having taken advice from Government departments, unions and others.

The Government’s own recommendation to the pay review body, of a 1% increase, proved controversial in March.

A leading union set up an industrial action fund, and made calls for the public to support a slow hand clap against the proposals, while health minister Nadine Dorries said Government could not afford to give NHS staff in England a pay rise of more than 1%.

– Who is and isn’t covered by the pay rise?

– Is it the same in the other nations?

Health spending is devolved, so pay is a matter for parliaments in Wales, Northern Ireland and Scotland.

In Wales, Health Minister Eluned Morgan agreed a 3% pay rise for all NHS staff, and in May, health workers across Scotland accepted a pay rise from the Scottish Government that is worth at least 4% for most staff.

– How much have unions asked for?

Campaign group Nurses United have called for a 15% pay rise, saying staff had lost more than that in real terms, while the Fair Pay For Nursing campaign aims to secure a fully-funded 12.5% pay increase for all nursing staff.

The pay rise will be laid before Parliament on Thursday morning, while the HCSA, the hospital doctors’ union, said it will meet in an emergency session to discuss its response to the pay offer.

Mr Cullen, of the RCN, added: “Nursing staff will remain dignified in responding to what will be a bitter blow to many. But the profession will not take this lying down. We will be consulting our members on what action they would like to take next.”