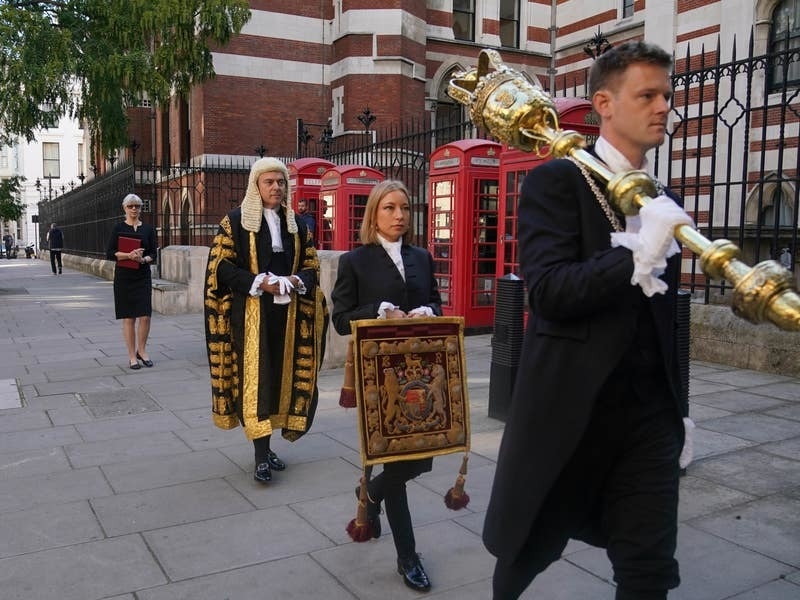 The Justice Secretary has urged striking lawyers to “carefully” consider a new Government pay offer after saying the “disruptive” action is “delaying justice for hundreds of victims”.

Brandon Lewis made his comments as he was formally sworn in as Lord Chancellor during a traditional ceremony at the Royal Courts of Justice in London on Thursday.

After hailing the work of the judiciary and court staff during the Covid-19 pandemic and efforts to cut down the case backlog, Mr Lewis said: “I am hopeful to now see an end to the disruptive strike action that risks undoing the progress made … and means delaying justice for hundreds of victims.

Mr Lewis said: “I am pleased to have reached an agreement with the leadership of the criminal bar today… these (proposals) are generous and I would encourage CBA members to consider them carefully and positively.”

A qualified barrister, Mr Lewis swore allegiance to new King Charles III in front of senior judges and lawyers during a grand ceremony in the gothic building’s Court 4.

He becomes the ninth appointee to the office of the Lord Chancellor – which can be traced back to before the Norman Conquest – since the Conservatives came to power in coalition with the Liberal Democrats following the 2010 election.

Michael Ellis KC, elected as Conservative MP for Northampton North in May 2010, was also sworn in as Attorney General, while Solicitor General Michael Tomlinson, Tory MP for Mid Dorset and North Poole, also made the official declaration for his role.

He highlighted the global standing of the English legal system and its economic impact.

Mr Lewis said the legal services sector contributed “over £29 billion worth of gross value add” to the economy each year.

“I want to make sure that justice continues to drive our economic growth,” he said.

Mr Lewis said he wanted to see “a modern justice system that is built around the people who use it”.

He added that he wanted to explore options for improving the probation service, adding: “I’m determined to make public protection the overriding factor in parole decisions.”

“It is perhaps not unfair to say that justice has suffered more than it should have done over the last decade.

“We look forward to admiring your powers of persuasion and advocacy skills in your dealings with the Treasury.”

The Lord Chief Justice added: “The problems and challenges that we face in the administration of justice were exacerbated by the Covid pandemic.

“Outstanding caseloads in many jurisdictions remain worrying high and a great deal of work is being undertaken to improve the throughput of cases to bring down backlogs and improve timeliness.

“That work requires the calm co-operation of all the major players in each jurisdiction and, critically, the policy, legislative and political support of the Ministry of Justice and its ministers.

“We have interesting times ahead, my Lord Chancellor.”

He is married with two children and has served as MP for Great Yarmouth since 2010 and previously occupied ministerial roles at the Department for Communities and Local Government – now known as Levelling Up, Housing and Communities.

A former leader of Brentwood Borough Council, Mr Lewis was made a CBE for political and public service in September 2019.