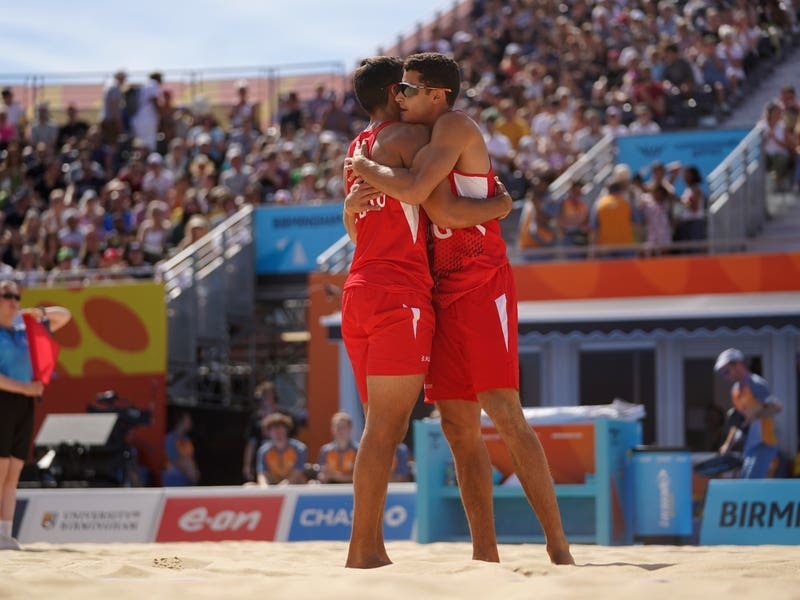 The Madrid-born twin brothers, who moved to the UK with their family 11 years ago, rebounded from their semi-final defeat to Canada to claim bronze in the men’s event after a 21-11 21-12 win over Rwandan pair Olivier Ntagengwa and Venuste Gatsinze.

After making history on the Smithfield sand, the siblings insisted they will only have one day off before resuming training as they look to become the first British side to qualify for an Olympics.

“We’re the first English team to get a medal at the Commonwealth Games, why can’t we be the first team to qualify for an Olympic Games as well?

“That is the ultimate goal, Paris might be a little bit too early but we’re going to fight for it every step of the way. Hopefully we can do that and be seeing you in Paris in two years’ time.”

After a one-sided victory was sealed, Javier and Joaquin immediately rushed to celebrate with team manager mother Barbara and training partner younger brother Enrique, who were standing inches away. Beach volleyball is a family affair for the Bellos as the siblings are also coached by father Luis.

Joaquin hopes their moment in the sun can inspire others to follow in their footsteps, as he added: “We’re going to keep working, keep trying to push up the world rankings to try to qualify for the Olympics.

Australia retained the gold medal they won on the Gold Coast four years ago as Paul Burnett and Chris McHugh edged out Canada duo Daniel Dearing and Sam Schachter 17-21 21-17 20-18 in a gripping final.