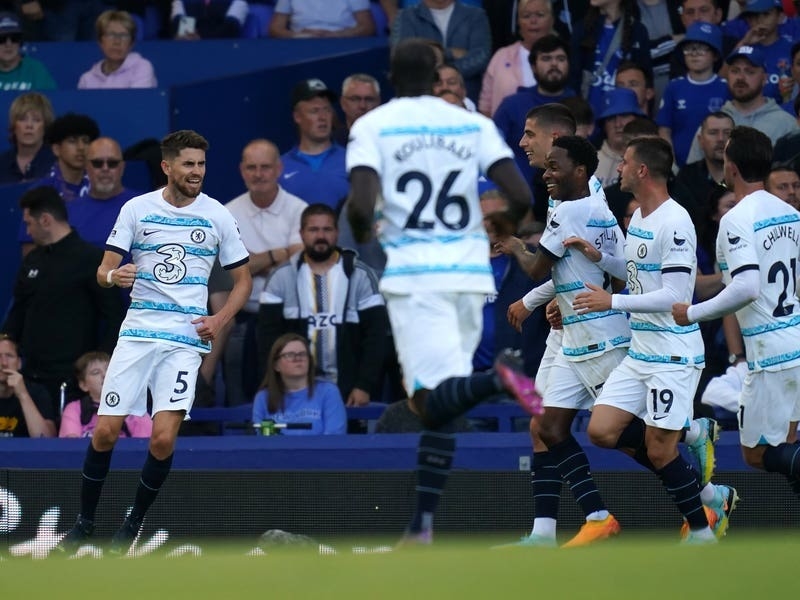 Jorginho’s late first-half penalty saw Chelsea claim their first win at Goodison Park in five visits but there was no fresh start for Everton who ended the day with a defeat and a double injury blow.

Everton’s Premier League campaign was barely 10 minutes old when Ben Godfrey was carried off on a stretcher and taken to hospital with a serious-looking lower leg problem and he was followed out of the Park End exit in the second half by injury-prone centre-back Yerry Mina.

Chelsea were not immune to the curse with debutant Kalidou Koulibaly also limping off in the final 15 minutes but he played his part in the 1-0 victory by ensuring the hosts were kept at arm’s length for long periods.

Each team started without a recognised striker – new signing Raheem Sterling and Anthony Gordon, for the hosts, nominally performing the roles – and there remains business done in that area for both side.

Chelsea are still looking for someone to fill the vacancy left by Romelu Lukaku’s return to Inter Milan but Everton’s need is even more desperate as they need cover for Dominic Calvert-Lewin, who is sidelined for about six weeks after missing much of last season with injury, and to provide the threat once posed by the now-departed Richarlison

As a result goals were likely to be at a premium and the first one particularly important so once Jorginho slotted home from the spot the visitors put themselves in a strong position.

Everton did pose a challenge in the second half, but they just could not make the breakthrough – something they struggled with for large parts of the previous campaign.

But it did not take long for their bad luck to materialise with Godfrey being carried off on a stretcher after what was a needless tackle on Kai Havertz.

The defender’s wayward backpass crossed the byline by about a yard but Jordan Pickford dragged it back on to the field and with the assistant referee behind play Godfrey charged back to dispossess the Chelsea forward but injured himself in the process.

Tarkowski was the first to threaten with his 24th-minute header tipped over by Edouard Mendy.

But with little happening on the pitch there was a ripple of excitement off it when the Toffees’ expected new £33million signing Amadou Onana arrived to take his seat in the directors’ box just before half-time, with the Lille midfielder having undergone a medical earlier in the day.

Sterling had the ball in the net from Pickford’s rebounded save but was flagged offside, but seconds before the interval Jorginho scored a penalty after Abdoulaye Doucoure pulled down Ben Chilwell.

But the attacking play began to fizzle out and Mina’s injury compounded the problems former Chelsea midfielder and manager Frank Lampard has to deal with as he seeks to make the improvements he needs to ensure another relegation battle is avoided.

Lampard’s replacement at Stamford Bridge Thomas Tuchel, who gave a debut off the bench to defender Marc Cucurella just over 24 hours after his £60m move from Brighton, also has work to do in getting his under-cooked side to gel.