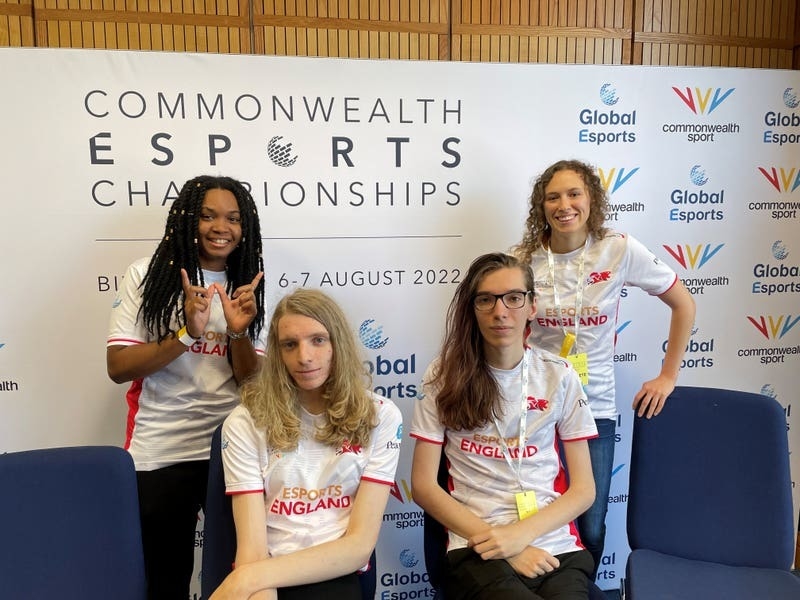 The Commonwealth Esports Championships are helping to normalise female participation in gaming and end a misogynistic culture, according to members of the England women’s team.

England’s Rocket League players, who compete on Sunday, say they have in the past been told to ‘get back in the kitchen’ and subjected to a stream of abusive messages online, but that events like the one at the International Convention Centre in Birmingham are helping to change perceptions.

The Championships, which are taking place on Saturday and Sunday, are not an official part of the Birmingham 2022 programme, but should the event be a success it is not impossible that it will be fully integrated in time for the 2026 Games in Victoria, as the Commonwealth Games Federation seeks to find new ways to engage with a younger audience.

Bella ‘Crimson’ Selwood, 21, admits Esports remain a bit of a “taboo” because it is perceived as nerdy and encouraging young people to spend time in front of screens, but highlighted how bringing it to a more mainstream audience was helping female gamers find a greater degree of acceptance and more inclusive environments to play in.

Crimson told the PA news agency: “It’s changing slowly, but it’s 100 per cent moving in the right direction. If I play Rocket League online, quite often you’ll get (comments like) ‘Get back in the kitchen, you don’t belong here’.

“The comments that you receive – even when you’re out of the game, whether you win or lose – you’re still getting messages from those players.

“I’ve had one guy in my DMs for four hours, just constant abuse. It’s not a good experience, but I’d say Rocket League is safer compared to other Esports.”

Asked about how it felt to have the association to the Games, and what it might be like for Esports to be fully integrated in future Games, Crimson added: “The Commonwealth Games is a relatable thing to everyone. You will have 50, 60 year olds saying ‘I can’t wait for the Commonwealths’ and then to have Esports, which has always been kind of taboo in comparison, hasn’t been normalised yet, but it’s definitely on the way.

“To have (Esports) related to the Commonwealths is so big for the scene – you will have adults who have never heard of Esports but they could be like ‘oh, that’s at the Commonwealth Games’ and perhaps it will hold a little bit of weight and think ‘hey, this is a big thing, I thought this was silly before’.”

Both Crimson and takara rejected the idea that Esports encourages sedentary behaviour and additional screen time.

“There are so many kids who aren’t sporty,” Crimson said.

“To get these integral things such as communication, dedication, you can put these things into Esports outside of (traditional) sports.

“Obviously there should be a balance – it’s not good to consistently sit in front of your computer, but I’ve met so many friends online. I met my best friend online. There are opportunities online that aren’t there in person.

“Not everyone is sporty and you don’t have to be. For people with special needs, such as autism, Esports are a great way of expressing who you are. There’s something for everyone.”

“The normalisation of Esports, comparing it to regular sports, has allowed us to have more resources in order to take care of people who are going to be gaming regardless.

“My day consists of eight hours of Rocket League, and people say ‘surely that’s not healthy?’ But I only play for a couple of hours, then I’ll go outside for half an hour.

“Because I’m at the Commonwealth Games, I’ve had an opportunity to speak with someone who’s knowledgeable about taking care of ourselves and making sure that we’re not experiencing the detriments of sitting at a desk for eight hours straight.”