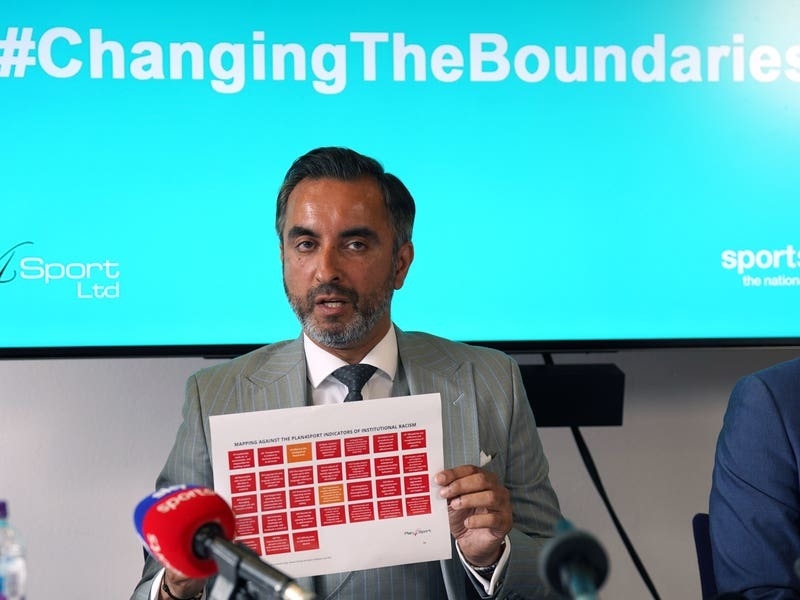 A report into racism within Cricket Scotland has been described as “the most devastating verdict to be delivered on any sporting institution in the United Kingdom”.

The analysis came from Aamer Anwar, the solicitor for the former Scotland players Majid Haq and Qasim Sheikh, whose allegations prompted the independent report.

Anwar declared the findings of institutional racism on 29 out of 31 indicators a “total vindication” of his clients, who both praised review team Plan4Sport for its compassion and thoroughness after initially being sceptical.

The lawyer, whose case history includes helping the family of Lanarkshire murder victim Surjit Singh Chhokar get long-awaited justice, said: “In 35 years of campaigning this is probably the one case that has horrified me the most. The scale of it is a devastating indictment.

“It should never be normal for a young person to be made to feel worthless, to be dehumanised in a sport they love, to be brainwashed into thinking it’s their fault, but that sadly is the brutal story of hundreds of young people of colour who played cricket in Scotland.”

Although Haq and Sheikh’s Scotland careers were of contrasting length, both told similar stories of never feeling part of the team, having their confidence deliberately dented, and always feeling they were two bad games away from being dropped while white players were given time to find their feet.

Haq gave an example of being moved from third to ninth in the batting order after hitting 120 not out. Sheikh hit consecutive centuries but found himself dropped after two below-par displays.

Both never played for their country again after publicly expressing their opinion that race was a factor in selection. Neither have heard from their former team-mates in recent times.

The 39-year-old, who made 10 separate allegations of discrimination to the review team, said: “It would have been nice to have some respect or compassion. I was made to say sorry and go public saying sorry when I didn’t commit a crime or anything. You would think it would be the least they could do but it seems they didn’t wish to.”

On the report, he added: “It has vindicated what I feel. A lot of people used to say to me that there’s no issue. It is true because it’s not just me and Qasim. There have been several hundred people taking part in this report. We can start holding our heads high.

“We were branded liars – Qasim for over a decade, me for seven and a half years. It’s been a relief for me and I really hope the future and current generation get the equal opportunities and support and backing.

“Any time you challenged anything you were branded a troublemaker.”

Sheikh, who did not play for Scotland after the age of 25 despite apologising for speaking publicly about his lack of opportunities, said: “We are not looking for a penny. I just want change. I don’t want to see any young girl or boy suffer like this in the future.”

Neither player wanted to join the new-look Cricket Scotland board at this stage but both offered to give advice.

“I would like to stay on the outside,” Sheikh said. “I would like to advise and help drive the sport forward but I don’t think it would be appropriate to sit on the board at this stage. You can never say never, maybe some time in the future.”

Anwar revealed he had contacted the International Cricket Council over the report and requested a meeting with the Scottish Government.

Health secretary Humza Yousaf promised that would happen along with meetings with other victims plus Cricket Scotland and sportscotland following the “damning review”.

Yousaf added on Twitter: “I am deeply personally saddened and angry at today’s findings, we must use it as a catalyst for change.”

His colleague, sports minister Maree Todd, said: “Swift and decisive action must be taken, and lessons must be learned, to ensure that racism, of any kind, will not happen within cricket, or any sport in Scotland.”

Both Haq and Sheikh have been in close contact with Azeem Rafiq, whose revelations about racism at Yorkshire led to them speaking out.

Rafiq told Sky Sports: “There’s a lot of people trying to still build up that courage to speak out and we need to show them that if they do, that there’s a safe place for them.

“It’s difficult to speak out, there’s a lot of challenges that go with it, you don’t suffer on your own, your family suffers, your everyday life suffers.

“(It’s not) until we change that and make sure whistleblowers, when they do come forward, are supported in the right manner, that we’ll really get to a point where more people feel empowered enough to come forward.”