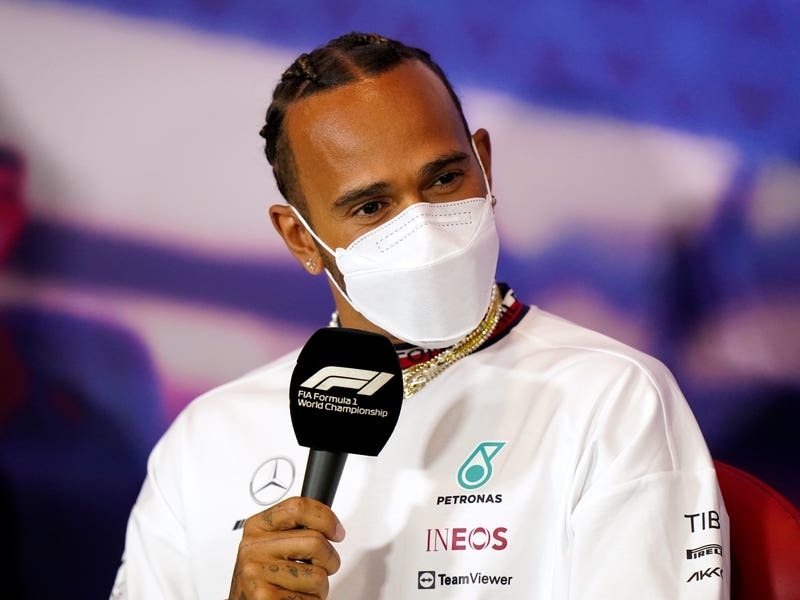 Lewis Hamilton has called for Bernie Ecclestone and Sir Jackie Stewart to be censored, and declared “enough is enough” after Nelson Piquet’s racial slur.

The seven-time world champion was speaking ahead of this weekend’s British Grand Prix – days after 69-year-old Piquet’s offensive reference to Hamilton emerged from a podcast recorded last November.

Triple world champion Stewart, 83, said recently that Hamilton should “resign” after struggling for results this season, while Ecclestone, 91, told ITV’s Good Morning Britain on Thursday that he would “take a bullet” for Vladimir Putin, also describing the Russian president as a “first-class person”.

“I don’t know why we are continuing to give these older voices a platform,” said Hamilton.

“They are speaking for our sport, but we are looking to go somewhere different and they are not representative of who we are now in the sport and where we are planning to go.

“If we are looking to grow our audiences in places like the US and South Africa, we need to be giving the younger people a platform that is more representative of today’s time and who we are trying to be.

“It is not just about one individual, or the use of that term (by Piquet), but the bigger picture.”

Hamilton, 37, continued: “I put to F1 and to the media that we should not be giving these people a platform – these old voices, who, whether it is subconscious or conscious, do not agree people like me should be in this sport.

“I don’t think in the last couple of weeks a day has gone by where some of the older people, who have not been relevant in our sport for decades, are trying to say negative things and bring me down.

“But I am still here, still standing strong and trying to do my work and pushing diversity. Discrimination exists. It is still all around us. Enough is enough.

Hamilton also took aim at Good Morning Britain for inviting Ecclestone on to their programme.

He continued: “There needs to be some accountability. You know what you are going to get with that, and I don’t know what their (GMB’s) goal is and if they were seeking to create and divide here in the UK.

“We don’t need any more of it. To hear from someone that believes in the war, and the displacement of millions of people and killing of thousands people, and supporting that person (Putin) who is doing that, is beyond me. I cannot believe I heard that today.

“It is affecting all those people out there and people around the world. This is going to put us back decades, and we have yet to see the real brunt of the pain.

Ecclestone later doubled down on his controversial remarks in an interview on TalkTV’s Piers Morgan Uncensored, repeating his favourable impression of Putin and describing the Russian leader as “a good guy”.

Having been shown a clip of Hamilton’s earlier press conference, Ecclestone called the Mercedes driver’s comments “a complete load of rubbish”, adding: “If he’s referring to me, he should think a little bit… I’m not racist, quite the opposite actually, and to say things like that is completely crazy.”

Ecclestone ruled F1 for more than four decades, but the sport moved to distance itself from his remarks.

An F1 spokesperson said: “The comments made by Bernie Ecclestone are his personal views and are in very stark contrast to the position of the modern values of our sport.”

Discussions between both parties remain ongoing but Hamilton could be summoned by the stewards if he refuses to take the piercing – which he says cannot be easily removed – out for first practice on Friday.

“It is kind of crazy with all that is going on in the world, that this is the focus for people,” said Hamilton.

“I would say it is worrying. We have so much bigger fish to fry. We need to focus on other important areas.

“I will be racing this weekend and working with the FIA. The matter is not massively important so I will work with [FIA president] Mohammed [ben Sulayem] and his team to progress forward.”