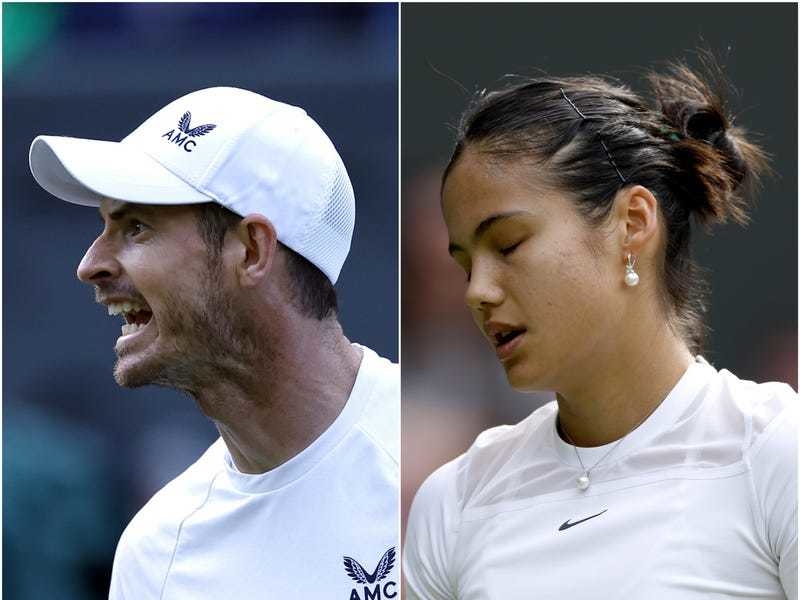 Centre Court witnessed the early departures of the two biggest home stars at Wimbledon as Emma Raducanu and Andy Murray both went out in the second round.

Raducanu’s 6-3 6-3 defeat by France’s Caroline Garcia was undoubtedly an anti-climax but hardly surprising given the results the 19-year-old has had since her US Open triumph and, most significantly, the side strain that severely disrupted her preparations.

“I didn’t feel anything out there,” the British number one said of the injury. “I declared myself fully fit when I walked out on to the court on the first day.

“But I’ve played seven hours of tennis in a month. To even compete with these girls at this level and win a round I think is a pretty good achievement.

“Obviously it’s tough to lose any match but I think that Caroline played a great match. She is a great player. I struggled to find a way through her today.

“But it’s OK because, coming into this, I didn’t really have many expectations of myself. Playing on Centre Court again was a really positive experience for me.”

The result was hugely disappointing for Murray, who saw his preparations disrupted by an abdominal strain.

He was left to rue what might have been, saying: “I could have had a good run here. One of the reasons why improving your ranking and trying to get seeded is important (is to) avoid playing top players and dangerous guys like that early in tournaments.

“It’s one of those matches that, had I got through, who knows what would have happened.”

Ryan Peniston’s great British summer on the grass ended with a 6-3 6-2 6-4 loss to another big-serving American, Steve Johnson, but Cameron Norrie kept the home flag flying by battling back from two sets to one down to defeat Jaume Munar.

Norrie finds himself the highest-ranked player in his quarter of the draw as he looks to make it past the third round at a slam for the first time, and his 6-4 3-6 5-7 6-0 6-2 victory over Spaniard Munar set up a clash with Johnson.

“I’m going to go and treat it like any other match, go out and compete as hard as I can,” the ninth seed said.

“I’ll go out and enjoy that. Another opportunity to embrace the pressure, embrace the challenge of trying to make the second week.”

Watson was broken trying to serve it out on Court 18 and at that point play was called off with the British player leading 7-5 5-4.