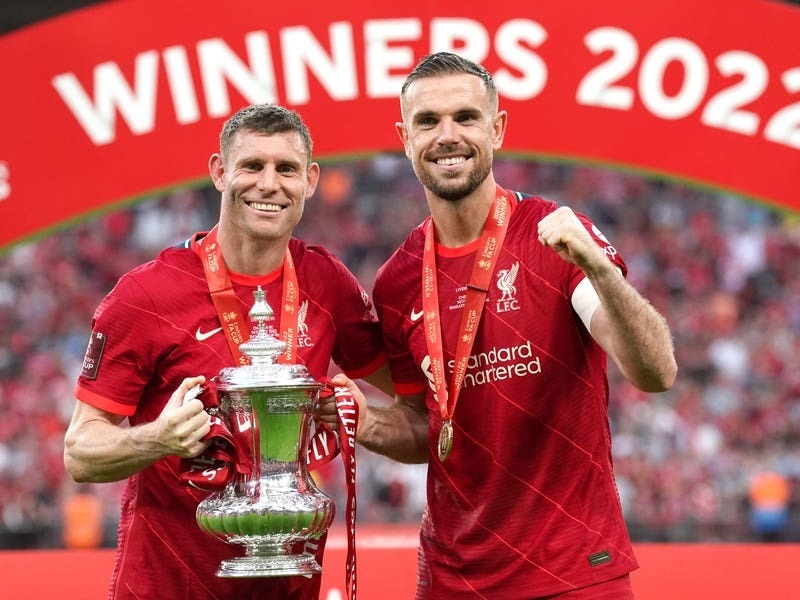 James Milner is determined to add at least one more trophy to Liverpool’s domestic cup double but says this will be a “special season no matter what” happens over the next fortnight.

There are just three matches remaining in the Reds’ quest for an unprecedented quadruple.

Jurgen Klopp’s side kept those hopes alive by repeating February’s Carabao Cup win on Saturday, with a goalless 120 minutes followed by another penalty shoot-out victory against Chelsea in the FA Cup final.

Milner knows former club Manchester City have the upper hand in the title race, but feels a second-placed finish would not take the edge off an unforgettable Liverpool campaign.

“You guys can keep talking about it,” he said of the quadruple. “For us, we just need to take a game at a time like we have done all year.

“We have three games left. We will try and win them and see where that takes us.

“We know it’s in City’s hands. They’re in a good position and they’re a relentless, very good team.

“So, for us to be where we are at this point in the season, to have two trophies in the cabinet and to still have a glimmer of hope in the other two, it’s been a special season no matter what.

“But we want at least one other piece of silverware.”

Milner’s second FA Cup triumph came 11 years after his first win, with the veteran coming off the bench in the second half of Saturday’s match to add to energy and experience in midfield.

Asked what Klopp’s message to him was when replacing Naby Keita, he said: “Just use your experience and try to get the energy and aggression into the game, but also be calm when we’ve got the ball.

“That was the message and that’s what we tried to do. Go in and try to lift the guys.

“You could see the fatigue out there, a couple of niggles as well, a couple of the boys coming off and things like that.

“The effort and workload the boys have put in this season has been an incredible, the amount of games they’ve had.

“I can’t speak highly enough of the attitude and the drive within the dressing room to keep going, no matter what’s happening, no matter how the game is going, the fatigue, mentally.

“They just keep going and going, pressing into extra-time and the boys up front pressing.

“He knows that the boys are bang at it,” Milner said. “You’ve got to celebrate it, you’ve got to enjoy it but obviously we’ve got another game coming up quickly, like it’s been all season.

“All season it’s been the same – another game to concentrate on.

“The mentality of the boys has been so good to be able to refocus and go again.”