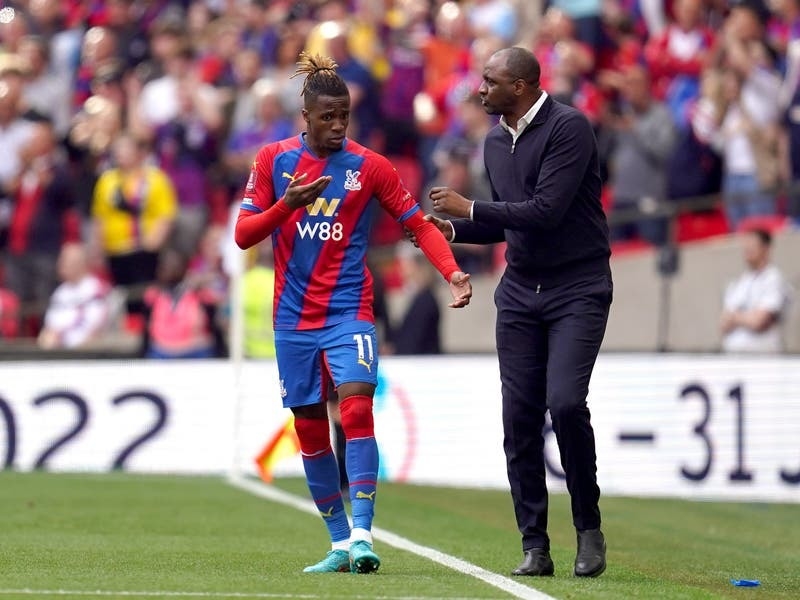 Crystal Palace manager Patrick Vieira has challenged Wilfried Zaha to hit the 20-goal mark next season and urged the attacker to continue his “legacy” at Selhurst Park.

The Ivory Coast international has found the net on 14 occasions this campaign with 13 of them in the Premier League.

Mohamed Salah and Son Heung-min are the only players in the top flight to score more than 20 league goals this season but Vieira believes his talisman, who will be 30 in November, is more than capable of reaching that standard.

“Yes, I don’t have any doubt about that. When you are looking at the goals he scores, the chances he creates, the chances the team creates, I believe he can get around those figures,” the Palace boss said.

“Wilf is at the peak of his game and I think he has this maturity to understand the game better than in the last couple of years.

The big question is will Zaha be at his boyhood club for the 2022-23 campaign. While most of the talk in recent months has centred on the future of Chelsea loanee Conor Gallagher, Palace have another key decision on the horizon.

Zaha is approaching the final 12 months of his contract and the Eagles could decide to cash in this summer or risk losing their top goalscorer for nothing.

Vieira pointed out: “Wilfried is a different scenario than Conor. Wilfried has been here for years and has a legacy in this football club.

“If he has to leave one day, nobody will ever forget what he achieved for this football club and I would love him to stay as long as he wants to stay, especially when he is performing the way he has been the last couple of months.

“As a manager I’d love to keep him but he as well needs to want to be here. This season I think he’s shown to everybody what this football club means to him, because he’s been performing well and scoring goals.

“I believe he can still take himself to a different level and help the team to grow.”

Zaha has scored nine times since he returned from the African Cup of Nations in February to put the Eagles on the verge of a record-breaking campaign with a best-ever finish and points total in the Premier League still possible.

With last month’s FA Cup semi-final trip to Wembley fresh in the memory too, it has largely been a wonderful first season for boss Vieira, but he says staying calm in the down periods has been key.

He added:  “It has been a good season. I knew that it would be challenging because having a couple of new players coming into the club and players coming from the Championship, we knew that they had the talent to perform at this level but it was just a question of time about how long they would take to adapt.

“Those players did fantastically well. We have had some ups and downs during the season but the strength that we had was that we didn’t panic when we were in our difficult period.

“We kept working in the same way, everybody at the club was really calm and we knew what we wanted to achieve and where we wanted to go.