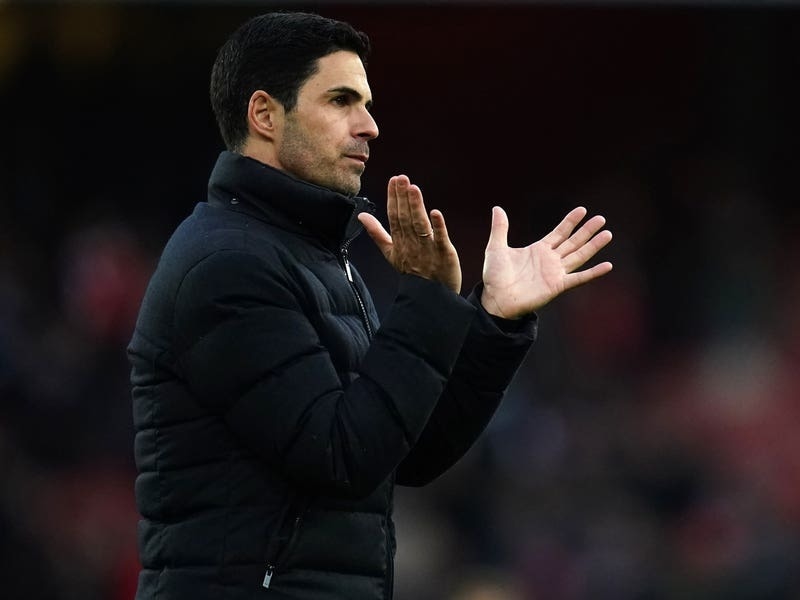 Mikel Arteta admits he is tempted to field a four-pronged forward line formed of his fine young attacking assets.

The Arsenal boss has plenty to ponder in terms of team selection with Emile Smith Rowe and Bukayo Saka both in the goals in the weekend win over Brentford.

With Arteta looking to mastermind a return to Champions League football, having such a precocious quartet at his disposal could prove vital.

Fitting the four players into his system may prove difficult and – on the one occasion Arteta has done so in the Premier League this season – Arsenal were held to a goalless home draw by Burnley.

But he admits it remains a tantalising prospect as the Gunners look to keep their top-four push on track.

“They have played together,” he said when asked if he could play Smith Rowe, Saka, Odegaard and Martinelli in the same line-up.

“Because they want to play and when you see players training and playing the way they do, you want to throw them all on the pitch. Unfortunately 11 is the limit.”

One change that could be made to accommodate all four players would be dropping Alexandre Lacazette.

The striker has been captaining Arsenal since Pierre-Emerick Aubameyang’s departure and also started the stalemate with Burnley.

“He has a really important role in the team,” said Arteta.

“Off the field and on it. He has been unlucky because he has had the chances to score as well, some goals in the last few weeks.

“He needs to continue to do that, to generate those chances for his team-mates, to be in front of goal in the positions we ask him to be in. The goals will come.

“We have to live with those expectations. He knows as a striker what is demanded of him, and that is to be involved in goals and the chance creation of the team.”

There was confusion on Saturday when Lacazette was replaced by Nketiah, who then tried to pass the captain’s armband on to Granit Xhaka, who then pointed him in the direction of Kieran Tierney.

While some supporters felt that Xhaka had turned down the armband, Arteta explained the Switzerland skipper made the right call given the club’s captaincy hierarchy.

“It is defined and Granit said to Eddie that he (Tierney) is next in line and that is why he gave it to Kieran. I think Kieran was really proud of it.

“Rob (Holding) is there as well, as the second one when he is playing. It is not easy. I understand it’s confusing.

“But you have to understand we have a lot of issues and more captaincy issues… I guarantee that is not what we need.”