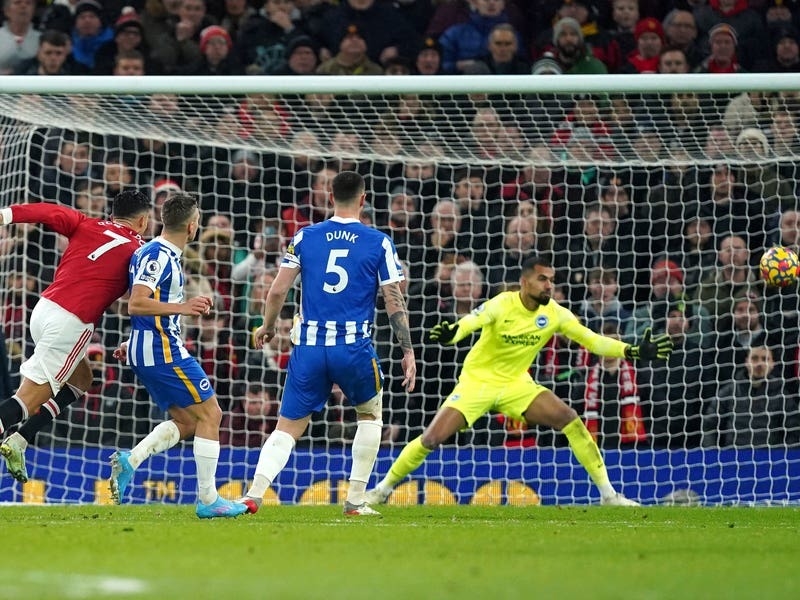 Cristiano Ronaldo ended his six-game scoreless streak to help Manchester United on their way to a much-needed 2-0 win against 10-man Brighton.

Having blown half-time leads to draw 1-1 in their last three matches, interim boss Ralf Rangnick called for his Jekyll and Hyde side to show their better side in Tuesday evening’s rearranged Premier League encounter.

Those calls fell on deaf ears in the first half as incoherent United were dominated by Brighton, only for a Ronaldo strike and Lewis Dunk red card early in the second half to change the course of the evening.

Graham Potter’s Seagulls impressed for large periods of a first half in which David De Gea superbly denied Jakub Moder, with boos greeting the hosts’ display at the half-time whistle.

But things changed within minutes of the restart as Ronaldo scored his first goal of 2022, before Anthony Elanga’s pace caught out Dunk and referee Peter Bankes showed the Albion captain red after reviewing the footage.

United had a number of great chances to wrap up victory, with Moder rattling the bar and Danny Welbeck heading over before Fernandes settled nerves in stoppage time.

United had to replace Raphael Varane with Victor Lindelof due to illness before kick-off and wobbled throughout the opening period.

Moder fizzed an effort at De Gea after slack early play, with Alexis Mac Allister also denied as home fans groaned during an opening in which they nearly had a fortuitous opener to cheer.

Adam Webster’s touch inadvertently put Ronaldo through on goal, with the 37-year-old backheeling for overlapping Jadon Sancho to get away a shot that Robert Sanchez saved. The winger’s resulting cross was also cut out.

It was a rare sight of goal as Brighton controlled the opening period to a backdrop of audibly frustrated United fans.

Pascal Gross and Yves Bissouma had attempts as chants of “we want Glazers out” competing with the visiting fans’ rendition of “just like Brighton, your city is blue”.

De Gea saved them from falling behind in the 39th minute, when Moder found space to meet a fantastic cross with a powerful header that the goalkeeper had to beat at his best to stop.

Bissouma fired narrowly wide after a fine move as home fans urged their team to attack, before boos greeted the half-time whistle.

United were a mess but the dynamics changed markedly within nine minutes of the restart, starting with Ronaldo ending his relative goal drought.

Scott McTominay got a foot in to dispossess Bissouma and poked the ball towards the frontman, who picked the ball up 30 yards from goal, darted forwards, cut past Webster and unleashed a fierce strike from the edge of the box.

Old Trafford erupted in relief as much as joy and the incline on Brighton’s uphill battle soon increased.

Referee Bankes initially handed out a yellow card, only to change it to red for denying a goalscoring opportunity after reviewing the monitor on the advice of the VAR.

Those quickfire gut punches put United in the ascendancy, with Sanchez forced to superbly tip over a close-range Ronaldo header.

Brighton’s goalkeeper was breathing a sigh of relief when he denied Fernandes having gifted the ball to Ronaldo, whose cross-shot from the loose ball came to nothing and soon glanced a header just wide.

United should have pulled further ahead and were jolted into life at the other end when Moder took aim from 25 yards and rattled the crossbar.

Fernandes, Harry Maguire and Alex Telles were denied by Sanchez as United pushed, with De Gea raging at his defence after former United striker Danny Welbeck was allowed to head over from close range in the 90th minute.

But Rangnick’s side were not to squander another lead. Paul Pogba took a quick free-kick to Fernandes, who collected the ball inside his own half, racing forward and, after smartly stuttering, lashed home deep in stoppage time.