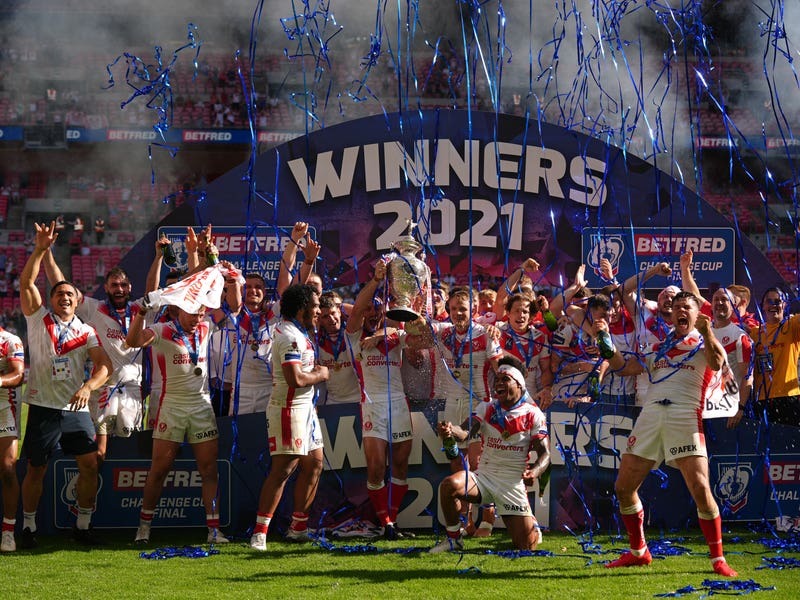 St Helens captain James Roby says he could be tempted to play on in 2022 by the prospect of helping to bring more silverware to his home-town club.

The 35-year-old England hooker led Saints to a 26-12 victory over Castleford at Wembley on Saturday, ending their 13-year wait to add to their Challenge Cup haul.

Roby, who captained the team to back-to-back Grand Final victories, now has four Cup final winners’ medals and hinted he might be back for more as he weighs up his future.

“On the one hand you could say it would be nice to finish on a high but on the other why finish when there’s more trophies to win?

“It’s a tough one, I’ll sit down with the club and see what’s going on.

“I’m just proud to be part of this club – I had success at the start of my career and I’m having success towards the back end of it.”

It was a controversial one, as video referee Chris Kendall conducted a lengthy deliberation over a potential knock-on and a possible foot in touch, but when it was finally awarded it helped Saints draw level after a disappointing first half and gave them the confidence to go on to complete an impressive win.

“It’s my first try of the year so I’m buzzing with that,” he said. “There were a tense few moments, I’m just glad it went our way.

“I think half-time maybe came at a good time for us because we needed to regroup. We said ‘let’s not panic, just do what we do well’.

Trailing 12-6 at the break, St Helens were indebted to their bench for the second-half transformation, with front rowers Matty Lees, Kyle Amor and Agnatius Paasi and 20-year-old utility back Jack Welsby all making their mark.

Welsby has filled in at full-back and on the wing this season and was at centre when he scored the last-second, match-winning try in October’s Grand Final, and he further demonstrated his versatility on Saturday by taking on a new role.

He replaced injured scrum-half Theo Fages at half-time and made the play for the try from winger Tommy Makinson that put the champions back in front.

“I was ready to do anything for the team. I’m happy to play anywhere.

“The four of us on the bench spoke about trying to up it after going 12-6 down and I feel we did that.

“Leesy in only his second game back was enormous for us with his energy and enthusiasm. It was the same with Kyle and Iggy but Leesy stood out for me. It was good to play alongside him and see what he does for the team.”