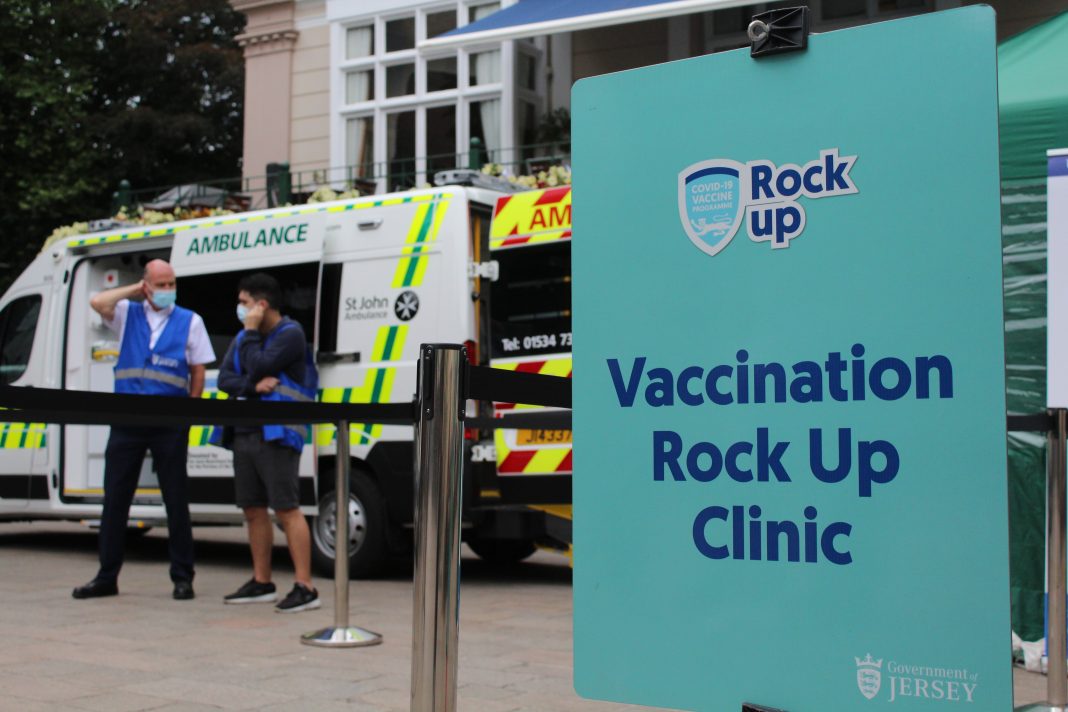 A group of 15 to 20 protesters turned up at the Springfield clinic and ‘verbally harassed’ staff and Islanders receiving their first dose.

There has been a growing movement across the world of anti-vaccination and anti-restriction protests. Last month, hundreds of people streamed through St Helier, many carrying signs, protesting against continued government restrictions being placed on Islanders.

But as Covid vaccinations opened up to under-18s, one mother, who asked to remain anonymous, said her 16-year-old son had to leave through the back of the tent having been approached by the group as he entered and told to leave.

She added: ‘There was a man with a placard, shouting at my son quoting the number of people who had died from the vaccine and the number who had experienced adverse reactions.

‘This was incessant. I asked him to stop and this only made things worse.’

Despite the trouble they faced outside the vaccination clinic, the mother spoke highly about how the staff handled the situation.

She said: ‘The staff were brilliant. He had his vaccination but, when he was shown to the chairs, they were facing the protesters and he was really intimidated at the thought of having to sit and be stared at. The staff kept coming to check on us to make sure we were okay and the guy running the centre stood in front of the protester to try to protect us. When we left, we did so through the back of the tent. The staff could not have handled the situation better.’

Vaccination drop-in centres have been set up in a number of locations across the Island as the government aims to increase uptake, particularly among young people.

A States police spokesperson confirmed: ‘Police were called on Saturday 7 August at 3.45pm regarding a group of approximately 15 to 20 protesters who had turned up at the Springfield pop-up vaccine centre.

‘Some of these protesters were verbally harassing staff and some of the people attending to be vaccinated. Police attended and the group dispersed by 4pm. No offences took place and no arrests were made.’

The government last week announced that the Pfizer vaccine would now be offered to 16- and 17-year-olds. Parents are being urged to discuss vaccination decisions with their children but the legal position is that anyone over the age of 16, who has the capacity to make such decisions, can give consent to receive the vaccine without further consent from a parent or guardian.

Vaccination programme operations lead Ross Barnes said: ‘Over the past week we have seen more Islanders, particularly young Islanders, coming forward for their first Covid vaccine. The Rock Up clinics are proving to be very successful and by extending walk-in appointments at Fort Regent, more Islanders have been able to make use of the flexibility and ease.’

Islanders who are yet to be vaccinated can utilise the Rock Up clinics for the remainder of this week, with sites Islandwide. Alternatively Islanders can book their first-dose appointments on the Covid-19 vaccine appointments page on the gov.je website, or by ringing the Covid helpline.