‘You think you are brave. Over 380 miles of Arctic tundra, we shall find out…’ 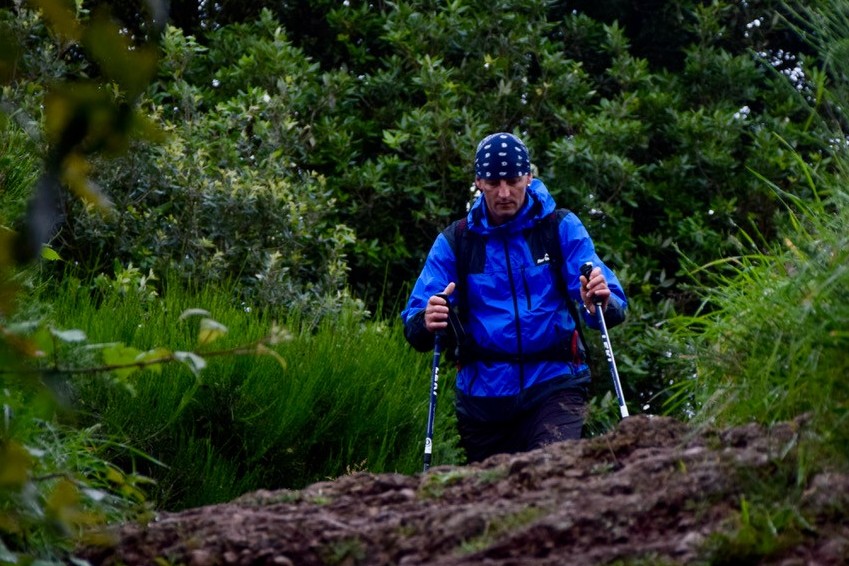 But if you ever see him wandering around the country lanes on his own in the dead of night, don’t be alarmed – it is all part of his training for one of the world’s most extreme ultra-marathons.

The 42-year-old chef from Romania has been regularly walking around Jersey 24 hours at a time as he prepares to take on the 6633 Arctic Ultra, billed as the ‘toughest foot race in the world.’ In doing so, Lancrajan will have to brave temperatures as low as -40C and strong winds in a desolate area known as ‘Hurricane Alley’, across 380 miles (yes, three hundred and eighty miles) of frozen tundra in the Canadian Arctic Circle. Completely alone, completely self-sufficient, over nine days of racing.

What makes this all the more remarkable is that this is Lancrajan’s first ultra-marathon.

It might sound crazy to mere mortals but Lancrajan holds no fear. Having grown up in the Carpathian mountains, Lancrajan says he regularly experienced extreme drops in temperature, where he nurtured a love of outdoor pursuits such as hiking, mountain biking, climbing and diving. He also counts on the experience of military service to help his survival instincts.

Lancrajan says he’s not going there to race. For him, it is all about the experience, the challenge and his love of the natural world.

Born and raised in the mining town of Petrosani in the shadows of the Parang mountains, Lancrajan calls Jersey his ‘paradise’ after moving here five years ago via Italy. His training will start at 10am and finish at 10am the next day, with another 100 kilometres under his belt. But there is a limit to how much preparation the Island can give him compared to the conditions he will experience in the Arctic in February next year.

‘Never have I tried something so difficult,’ Lancrajan admits. ‘I think everybody will be a little bit scared of the environment. It’s cold, windy and tough but all my life I think I am a friend of nature and I understand nature. Now it is time to see if nature understands me.

‘You think you are brave but you will find out over there if you are brave or not. It is a mental challenge. You will fight with your inside demons because you are by yourself all day and all night. If you don’t arrive in checkpoints, you need to sleep outside and I don’t want to see the wildlife over there. I prefer to see the wildlife on television, so you need to be very careful.

‘You need to think about your equipment, ration of food, medication, all these things.’

Lancrajan will be carrying around 45kg of equipment with him to help survive the elements. As well as the risk of being eaten by a ravenous polar bear, there is a real risk of hypothermia, frostbite and even amputations.

Not that it worries him too much.

‘Because I have stayed in the mountains in Romania and I have a lot of knowledge about the cold environment so I know how to manage,’ he says confidently.

The costs for Lancrajan to go to Canada and compete in the race are, understandably, not that cheap but once he has taken care of his own necessities, he hopes that he can give a little back to the Jersey community that he speaks so highly of by raising funds for the local RNLI. He thanks the manager of the Hungry Man for allowing him time off to train and his girlfriend for covering his shift so many times.

‘It is a fantastic, beautiful community in Rozel, so amazing,’ he said. ‘I meet only amazing people, lovely people. I love Jersey. They make me feel like part of the family. Everybody has given me support and, of course, I want to give something back to the community.’

The community hopes Lancrajan will give himself back, safely in one piece, after conquering the most difficult endurances races in the world from the icy wilderness of Yukon to where the northern coast of Canada meets the Arctic Ocean.

Lancrajan thanked JPM Ironworks, the Hungry Man and community of Rozel for their continued help and support.