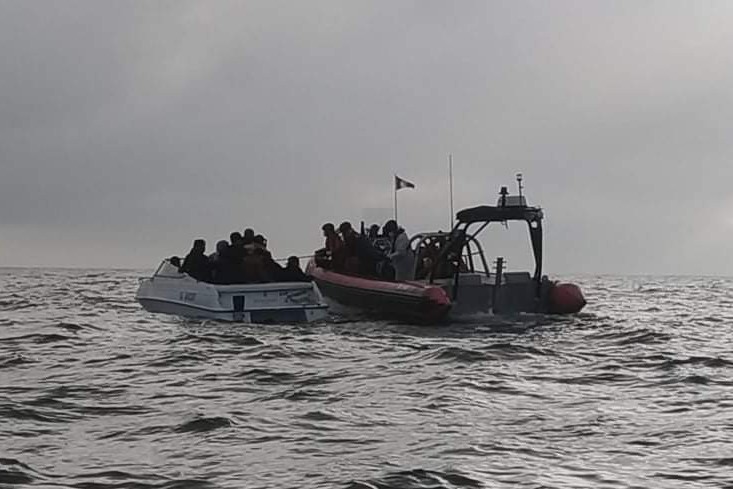 Following Thursday’s incident, in which the migrant-carrying vessel was intercepted off the Minquiers, a reef nine miles south of Jersey, local Customs officers said they would be stepping up ‘our focus on this’ while mariners and fishermen were urged to report any unusual activity.

Bertrand Leclerc, the prosecutor for St Brieuc – the area from which the migrants are thought to have set sail – told Le Télégramme that investigations were still in their very early stages and it was unknown where the people originated from.

Speaking to the newspaper, he said: ‘We must identify the port of departure but also the owner of the boat, registered in France.’

Referring to the investigation into a potential human-trafficking ring, he added: ‘Twenty-seven people do not arrive by chance in a port to [go to sea] in such a small boat.’

On Thursday morning, the six-metre vessel broke down south-west of the Minquiers Reef having departed from the Brittany Coast. French authorities intercepted the boat with those on-board taken to St Malo.

A man in Rennes was arrested on Thursday by French border police. He is suspected of having been involved in organising the voyage.

Meanwhile, St Malo prosecutor Christine Le Crom told Ouest-France that it was believed the migrants had been heading to Jersey.

The alarm was raised at around 4.30am on Thursday when a fisherman found the speedboat drifting in complete darkness. Among those on board were ten children and a woman in a wheelchair who, after being rescued, was treated for hypothermia.

Witnesses said the vessel was not carrying any safety equipment, was not equipped with GPS and that those on-board were not wearing life jackets.

Meanwhile, Andy Hunt, senior manager for the Customs and Immigration Service, described the attempt as ‘unusual’ for the Jersey area and said he did not think they were trying to reach the Island.

‘Our view is that the group was probably looking to reach the UK and not Jersey. The situation in the eastern Channel [Dover and Calais] is very different,’ he said. ‘You can get up to around 100 migrants a day trying to get between France and the UK there whereas here we have not seen anything for the past couple of years. What we saw yesterday was quite unusual. We are liaising with all services to see what our intelligence picture looks like and if there is an escalated risk of migrant crossings coming our way.

‘In the short-term, we need to understand if what has happened is isolated or part of a pattern. We have definitely stepped up our focus and activity on this.

‘But the most important thing is that, if any migrants attempt to land on our shores, we ensure the safety, security and wellbeing of all those concerned. Once that has been done, we can debrief and interview them and decide what action to take.’

Mr Hunt appealed for any Islanders – particularly mariners and fishermen – to report any unusual activity.

He said: ‘If you compare it to the sort of activity you see in the English Channel then, yes, it does have a semblance of being organised. But whether in this case it was organised by criminals or by the migrants themselves, I would not like to speculate.

‘If anyone is out at sea and sees anything suspicious then their first point of call would be the Jersey or French Coastguard who will both be able to implement all the necessary protocols.’