Unveiled: Barbara is the Face of Liberation

Mrs Jouanny’s Occupation identity card photo was chosen from more than 6,000 images contributed by Islanders in the quest to identify a face representing Liberation 75.

Her face as a child, recreated in a mosaic from the individual images of her fellow Islanders, will now be displayed at the Esplanade on a wall between the bus station and the former Tourism building, which was at the heart of the Island’s Liberation celebrations on 9 May 1945.

‘I’m quite pleased with myself,’ Mrs Jouanny said. ‘I haven’t told any of my friends, so they’re going to be quite surprised when they see something in the paper. It is very exciting to have something like this at this time in my life.’

The announcement brings to a conclusion a project which started early this year when Islanders were invited to submit contemporary or historic photographs, together with thoughts about the significance of freedom, in a project organised by ArtHouse Jersey. The photographs were used as a mosaic by artist Helen Marshall to recreate the single image on public view at the Esplanade.

One of the highlights of the Liberation 75 programme, it was due to have been completed just before Liberation Day but was postponed because of coronavirus restrictions. Mrs Jouanny’s portrait was unveiled by the Bailiff, Timothy Le Cocq, in the presence of the Lieutenant-Governor, Air Chief Marshal Sir Stephen Dalton and Chief Minister John Le Fondré. A number of other shortlisted images are now also on display, alongside the main image. 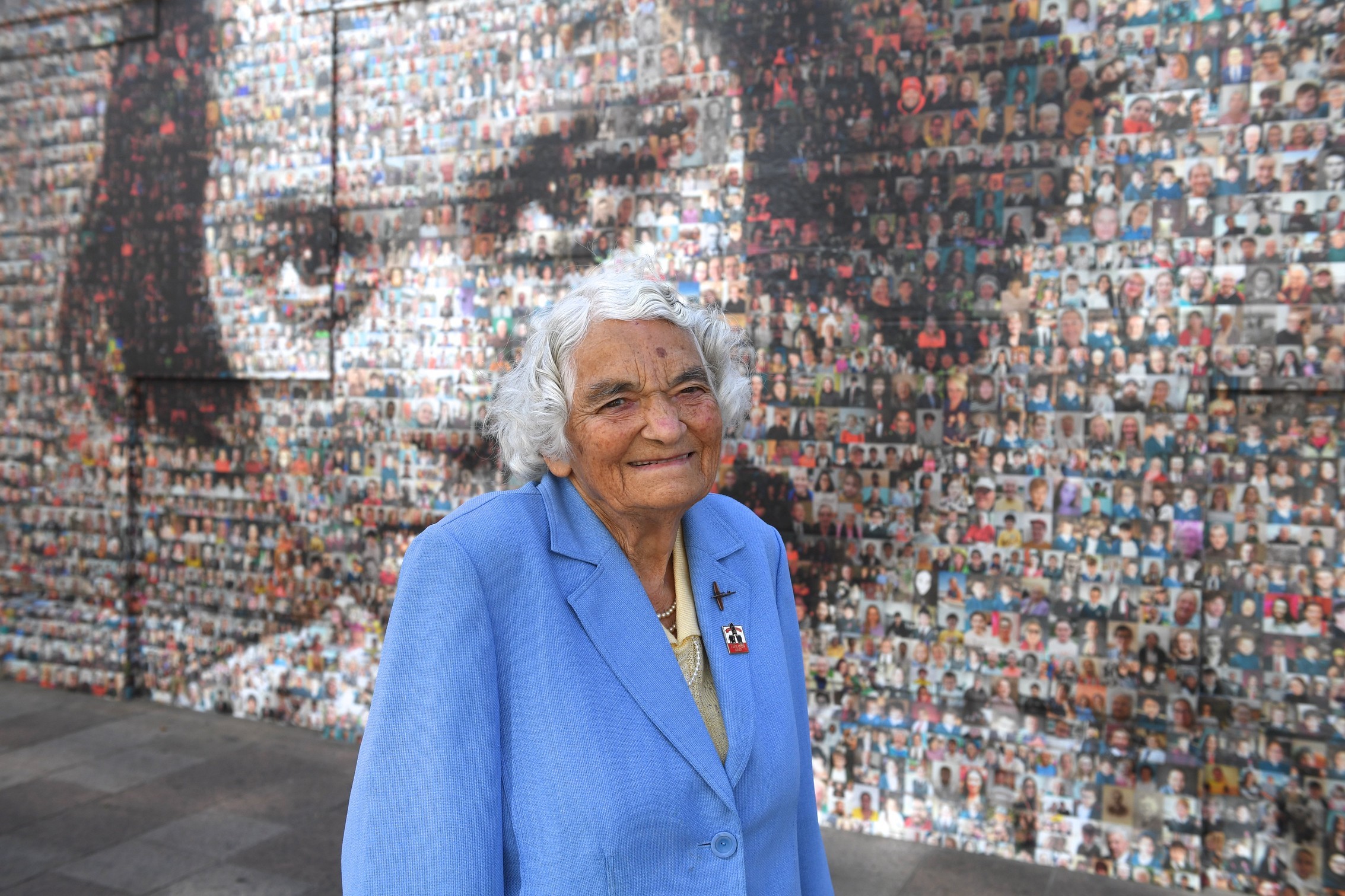 Mrs Jouanny, Barbara L’Amy as she then was, lived with her parents and nine siblings at First Tower, opposite the Bay View Hotel where many of the older German soldiers were billeted.

Her recollections of the significance of the Occupation focus on the extent to which many of those involved, whether occupiers or occupied, were involuntary participants in the experience.

‘There was one old chap, an elderly German, who used to come across and talk to us, and all he wanted to do was to be back in Germany. The children reminded him of his grandchild and he wanted to be back home. I can always remember that. Then the first Christmas he brought all the children a little present, and then he was taken ill and taken back to Germany but before he left he brought Kidnapped by Robert Louis Stevenson for my birthday, which he gave to my mother because I reminded him of his granddaughter.

‘When I thought about it later in life he seemed like a granddad. I still have the book but I’ve never read it. I don’t know why but I’ve still got it,’ she said.

Mrs Jouanny almost missed the experience of the Occupation as the family intended to leave in June 1940 as evacuees but her mother, having waited for several hours on the quayside, decided that she could not face the journey and the family returned home. Mrs Jouanny, who was 17 when Liberation finally arrived, remembers standing at West Park with her husband-to-be, watching the troop carriers in St Aubin’s Bay loading their cargo of German prisoners of war.

‘I was courting at the time and I think we were down at West Park until about midnight. It was exciting seeing them all go but we never had any problems with the Germans,’ Mrs Jouanny said.

Announcing the choice of the Face of Liberation, Mr Le Cocq said that the project, run by ArtHouse Jersey with the support of the JEP, to mark the milestone Liberation anniversary had assumed even greater importance because of the restrictions on Islanders’ freedom caused by Covid-19.

‘I would like to take this opportunity to thank each and every Islander who contributed to this meaningful and magnificent piece of art in one way or another. I am proud to have the opportunity to unveil this historic artwork which I hope will be looked upon with interest and wonder in another 75 years from now,’ Mr Le Cocq said.

ArtHouse Jersey’s director Tom Dingle urged the public not simply to enjoy the large-scale piece of public art as they passed by but to look more closely at the many individual faces which made up the larger image, and to enjoy the breakout exhibition featuring some of the other shortlisted faces.

‘Every photo submitted to the Face of Liberation will be preserved by Jersey Heritage. For Islanders wishing to find their own submissions in the giant artwork, they can either scan the installation itself, or zoom in on the image on the ArtHouse Jersey website,’ Mr Dingle said.

The supporting exhibition includes images of Bernie Turpin, son of the Corbière lighthouse keeper, who was imprisoned in Newgate Street jail towards the end of the Occupation, Ivy Forster, sister of Louisa Gould and the first woman to be elected to the States, Ronald and Madeleine Bisson, who drowned while trying to escape from the Island in November 1944, and Joyce Norman, a volunteer for the St John Ambulance and one of the oldest Occupation survivors.