Testing times at the Airport and Harbour

Add into the mix a global pandemic, and the anxiety and controversy over the reopening of borders, and it is fair to say that travelling during the ‘new normal’ is never going to be particularly relaxing.

But those behind the PCR testing system, which is now in place for people arriving in Jersey, say they want their part of the process to be as simple and user-friendly as possible, while always recognising that safety is the most important factor.

‘As we ramp up, [with more travel to the Island expected] we have got to maintain that level of service,’ said Tony Moretta, who was seconded from his position at Digital Jersey to work on the track-and-trace programme.

‘The important thing to note is no one else is doing this at the level we are doing it.’ 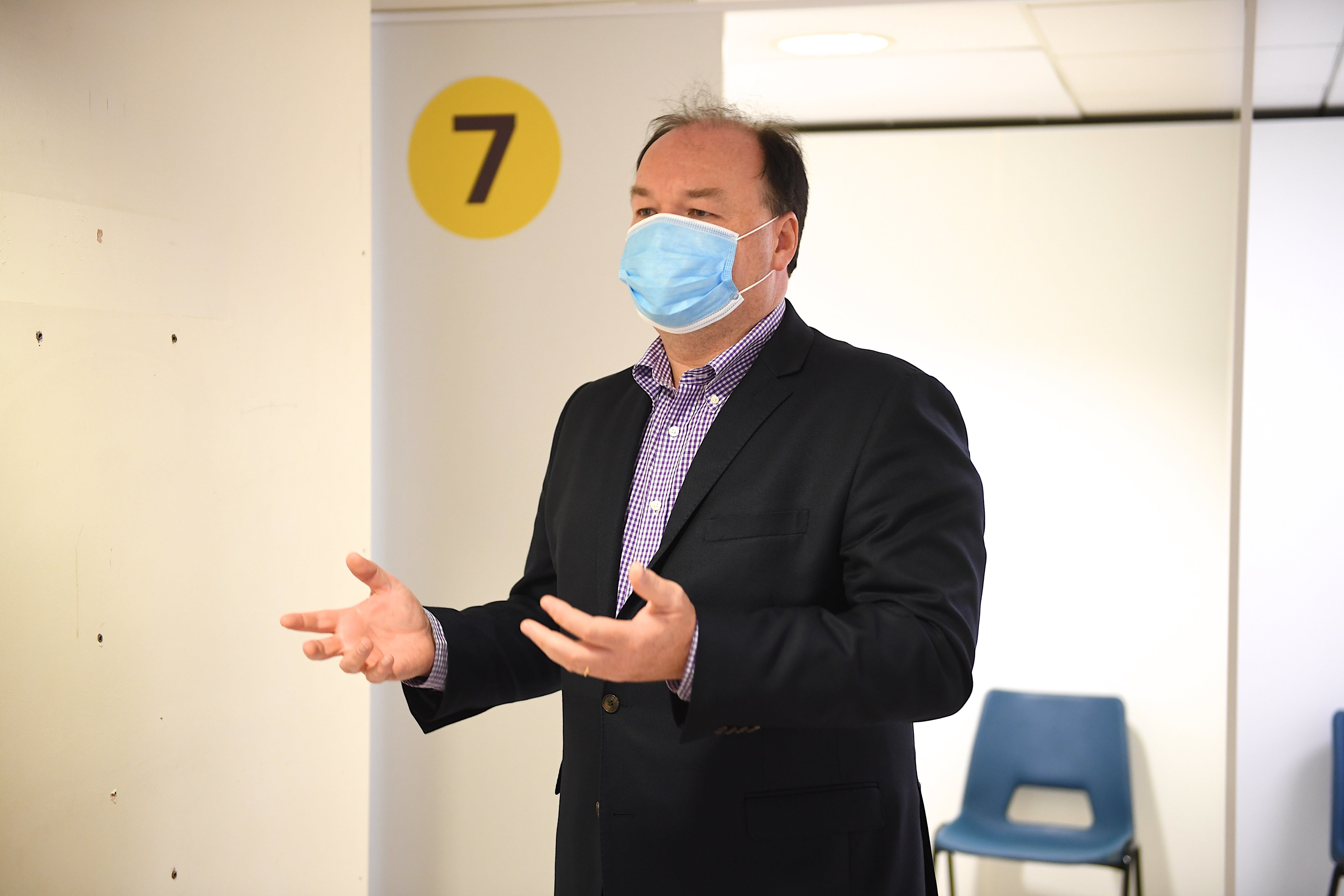 Since Jersey’s borders reopened on Friday 3 July, the testing system has not been without its teething problems. There have been computer issues, both in Jersey and at the laboratory in the UK, which have delayed the results of some tests.

And questions were raised when 21 passengers who arrived on the Commodore Clipper earlier this month were not swabbed straight away, instead they had to attend appointments the next day.

After just two days, there had also been two positive cases detected during the arrivals screening. And last Monday a further two cases were identified.

But there have been other examples – although people may not have not shouted as loudly about them – of people praising the ease and speed of the testing.

Mr Moretta said the process to get the system up and running had been long and complicated, involving staff who had been seconded from various areas of the Government of Jersey machine, from health and IT to the police and Fire and Rescue Service.

‘Everyone has really pulled together on this system and these people have been working every Saturday and Sunday, every bank holiday, to get this done and it is still ramping up,’ he added. ‘You are always going to have the odd teething problems, but the important thing is to make sure those teething problems don’t cause risks.’

So what actually happens as a passenger travels through the system, from departure point to arrival, and what happens after that swab has been taken?

A passenger’s journey into the testing-and-tracing system in Jersey starts long before they actually get off the boat or plane, whether that be a public or private vessel or aircraft.

Everyone intending to visit Jersey – no matter where from, how long for or for whatever purpose – needs to complete an online registration before they travel.

The aim of that process is to collect their data to enter into the test-and-trace system, so they will be asked for personal details as well as where they intend to stay while in Jersey, the duration of their visit, the type of transport they will use once here. They also have to answer health questions such as whether they are displaying any symptoms, or have had any previous positive test results, and have to provide contact details that can be used while they are in the Island.

Passengers are also required to declare any countries they have visited in the 14 days before travel. With a traffic-light system in place declaring some countries higher risk than others, those who have come from a red-level country must self-isolate for 14 days as well as having a test.

Ferry companies and airlines have introduced their own measures during the pandemic in an effort to keep staff and passengers safe.

Condor, for example, asks passengers to check in earlier than normal to enable smooth embarkation, and has introduced contactless boarding cards. Capacity has been reduced on all of its sailings to ensure passengers can be properly spread out. 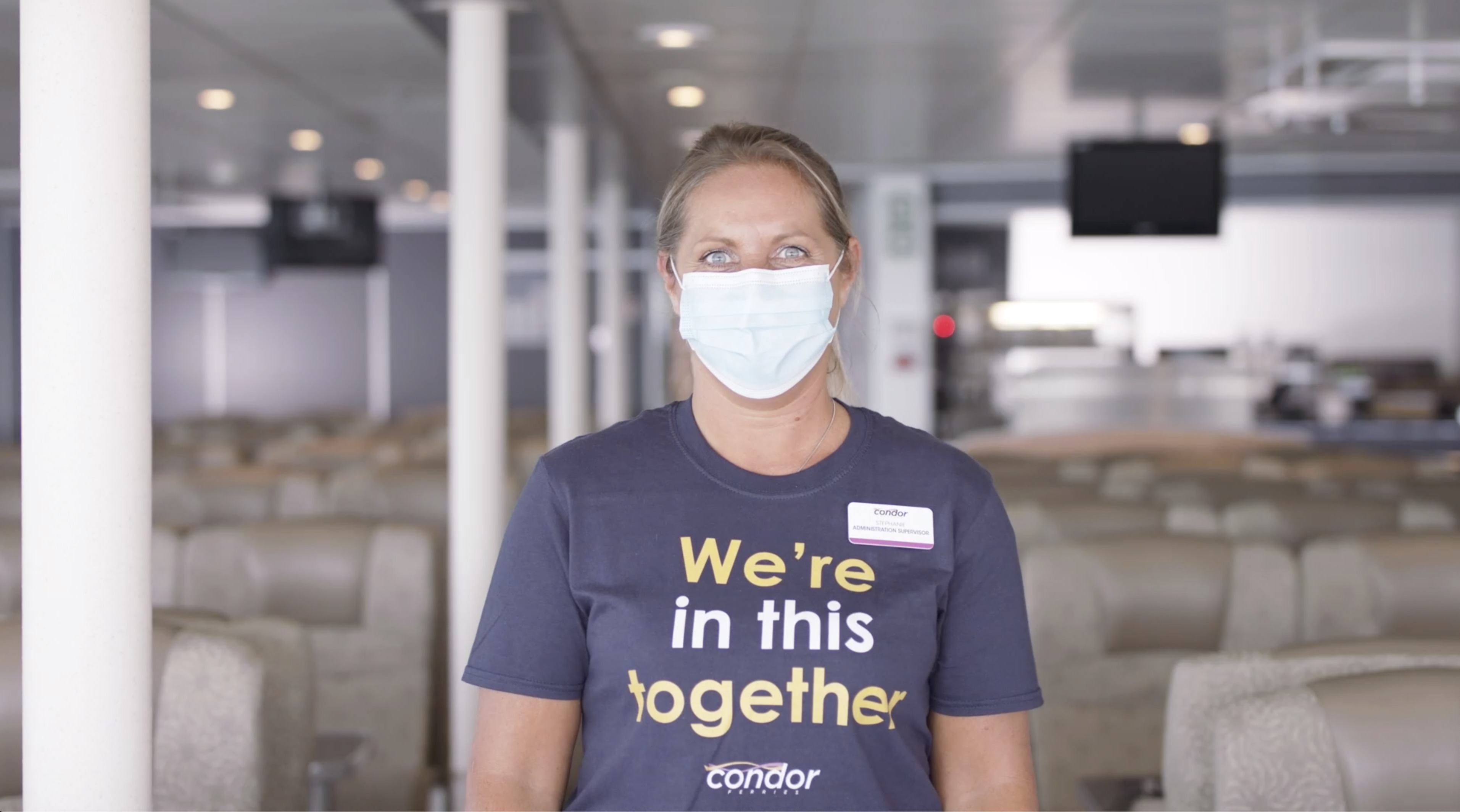 Travellers are required to wear masks onboard, food and drink is self-service only, cleaning has been stepped up and floor distancing markers and protection screens have been installed. Members of staff escort small groups of passengers to the duty-free shop.

Blue Islands, meanwhile, has required passengers to wear masks on its flights since 8 June.

Distance between passengers in the cabin is maximised where possible and, with the exception of safety cards, all seat-back literature has been removed.

As well as enhanced cleaning, ‘Microbe Shield’ protection – an eco-friendly surface sanitiser – is used throughout the cabin to provide protection for up to 30 days.

As soon as passengers land or dock in Jersey and switch on their mobile phone, they receive a text message. It is similar to the kind sent by network providers when you switch on to their service on holiday, but it informs them of the testing process, warns of possible delays to exiting and encourages people who have not preregistered to do so.

When passengers disembark the plane or the boat, they are shown to a queue for testing. This applies to ferry passengers travelling in their vehicles as well. Even those choosing to isolate for 14 days, rather than have a test, are not allowed to leave the Airport or Harbour until they have provided the authorities with their details, as well as information about where they will isolating to enable spot checks to be carried out. 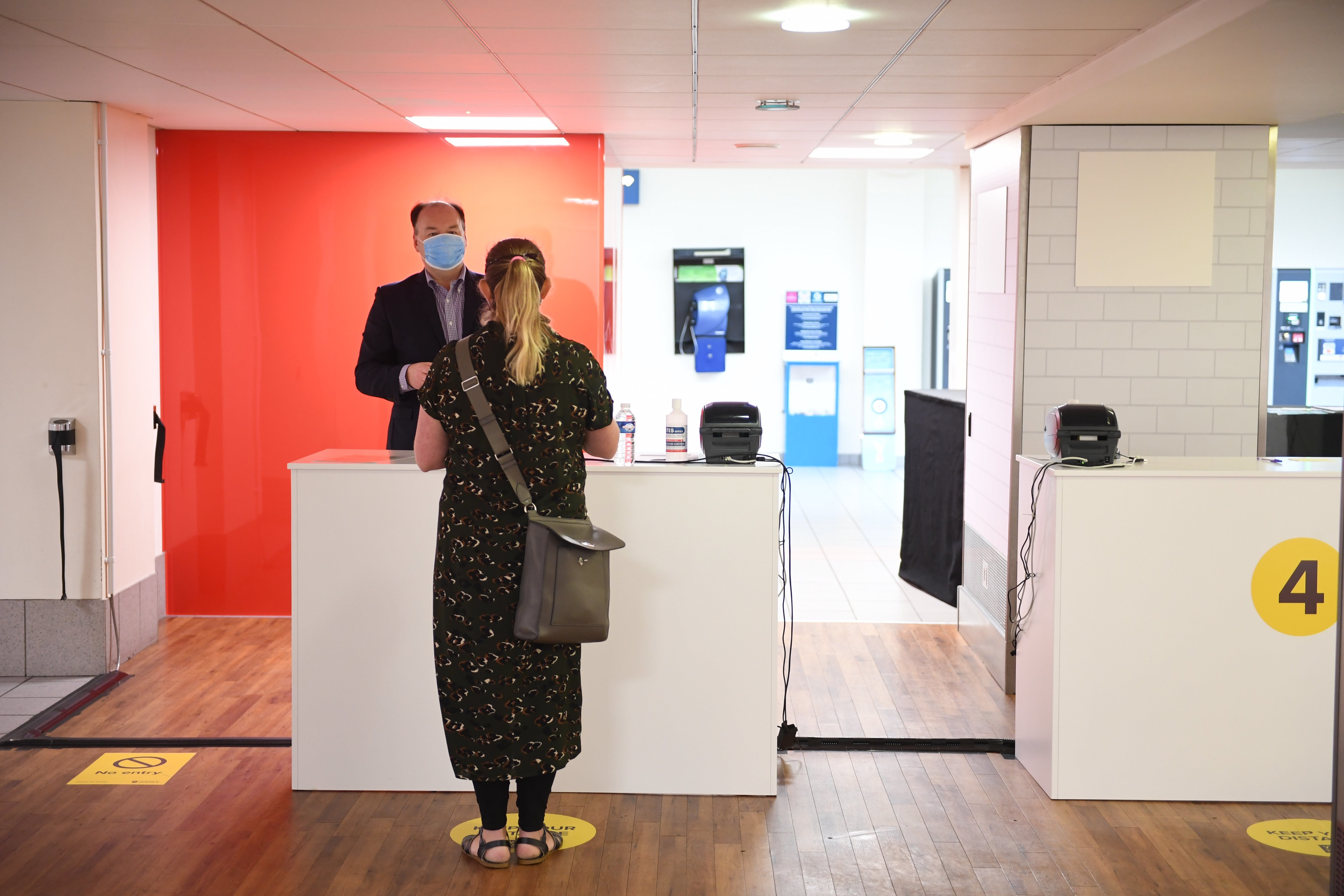 ‘They are not allowed through the doors until somebody has confirmed they have already registered and given their information,’ said Mr Moretta.

At the Elizabeth Terminal, a temporary structure has been built to house the testing facility as tests cannot be carried out in the rain. Car passengers remain in their vehicles while testing is carried out through an open window.

At the Airport, the former café in the arrivals hall and the space where the children’s play area was previously located have been turned into a testing facility.

Arriving passengers are kept in the baggage reclaim hall until there is space for them to move through the arrivals doors and join the queue for testing, using the hand sanitiser as they pass.

A passenger’s first stop is at one of ten desks, where they effectively ‘check in’. Individuals, or family groups if they prefer to stay together, provide their details to a member of staff and, if they have preregistered, this part of the process is much quicker.

The IT system used to collect and co-ordinate this information is also in the process of being switched over from the TrakCare system used by the Hospital – which is slower to use, can only be used by healthcare workers with experience of using it and requires data to be repeated – to a more simple-to-use system capable of speeding up the process further.

When the new system is in place, passengers will be able to show a QR code on their phone or a piece of paper when they check in, which will link to their data straight away.

A passenger is then given printed labels with their details on, and sent to one of ten swabbing stations.

Those arriving on private boats or planes preregister as normal and are then contacted to arrange an appointment for a test at the Airport drive-through testing centre.

The PCR – polymerase chain reaction – swab is just a small part of the actual process. It takes just 30 seconds or so and is carried out by a trained healthcare assistant in full PPE. They use a swab to take a sample from the back of a person’s throat and/or nostril.

Different people react differently to it, and some may find it briefly uncomfortable. Everyone over the age of 11 is offered a test, which is paid for by the government. Based on medical advice, under-11s are not tested and are generally assumed to be negative if their parents are. 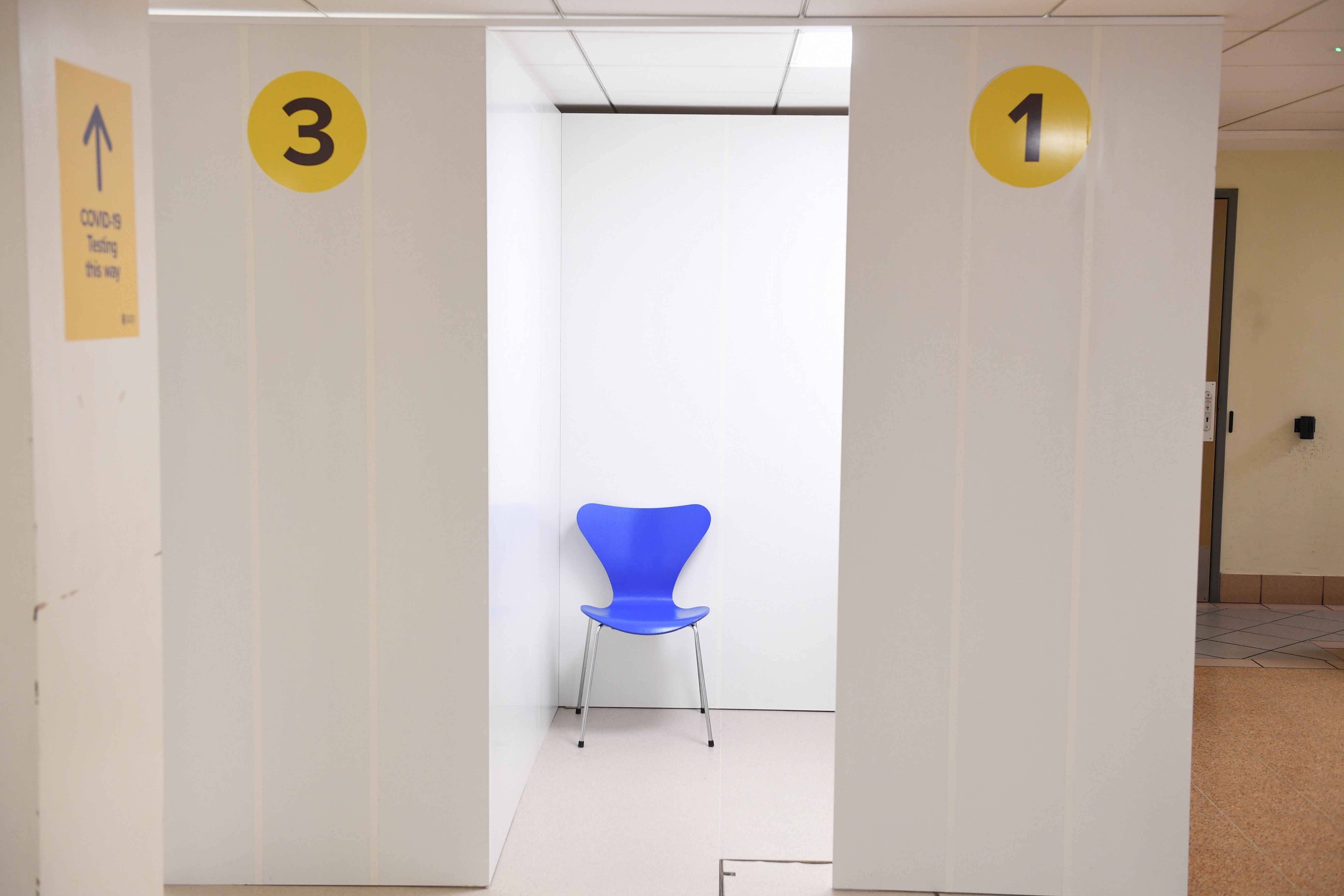 The PPE worn by the healthcare assistants is changed in between every single swab.

Completed tests are labelled and immediately stood in a tray outside the testing booths. It is important that they remain upright otherwise they have to be packaged again, slowing down the process.

Before they exit, passengers are given a leaflet informing them of the next steps.

At both the Harbour and the Airport, satellite laboratories have been set up for packing the tests, the majority of which will be sent out of the Island.

Although Jersey currently has capacity to take around 500 PCR swabs a day, only a small number of them can actually be processed locally. This is because there is a worldwide shortage of the filters needed to make the testing machines work.

Therefore, priority for testing in Jersey is given to those with symptoms, those admitted to the Hospital, or in cases where there is another reason that the results are required as soon as possible. For example, following concerns about the passengers onboard the Clipper not being tested, their swabs were processed locally to allow results to be returned as soon as possible.

All other tests are sent to a private laboratory at the University of Warwick Science Park in Coventry. They are flown to the UK on two daily flights to East Midlands Airport. The first flight carries the swabs from morning arrivals, and those from the afternoon passengers travel on the mail plane as it returns to the UK.

The tests are then couriered to the lab, around 40 minutes away from the airport, and arrive at around 10pm into the 24-hour reception, ready to be analysed first thing the next morning.

The remaining tests are flown to the UK the morning after they are taken and arrive at the lab at around 9.15am.

While waiting for their results, passengers are told to limit time away from their home or accommodation, limit social contact with others, avoid public transport where possible and adhere to one-metre physical distancing.

Results are usually back between 24 and 72 hours after the initial test date, and passengers should be notified by text message as soon as the results are in, whatever the time of day.

However, technical glitches have meant emails have been sent on some occasions, or that messages have been delayed. Anyone wanting to chase up a result can call the coronavirus helpline.

The government is currently in talks with the lab in the UK about out-of-hours testing, which would enable the results to be returned more quickly. 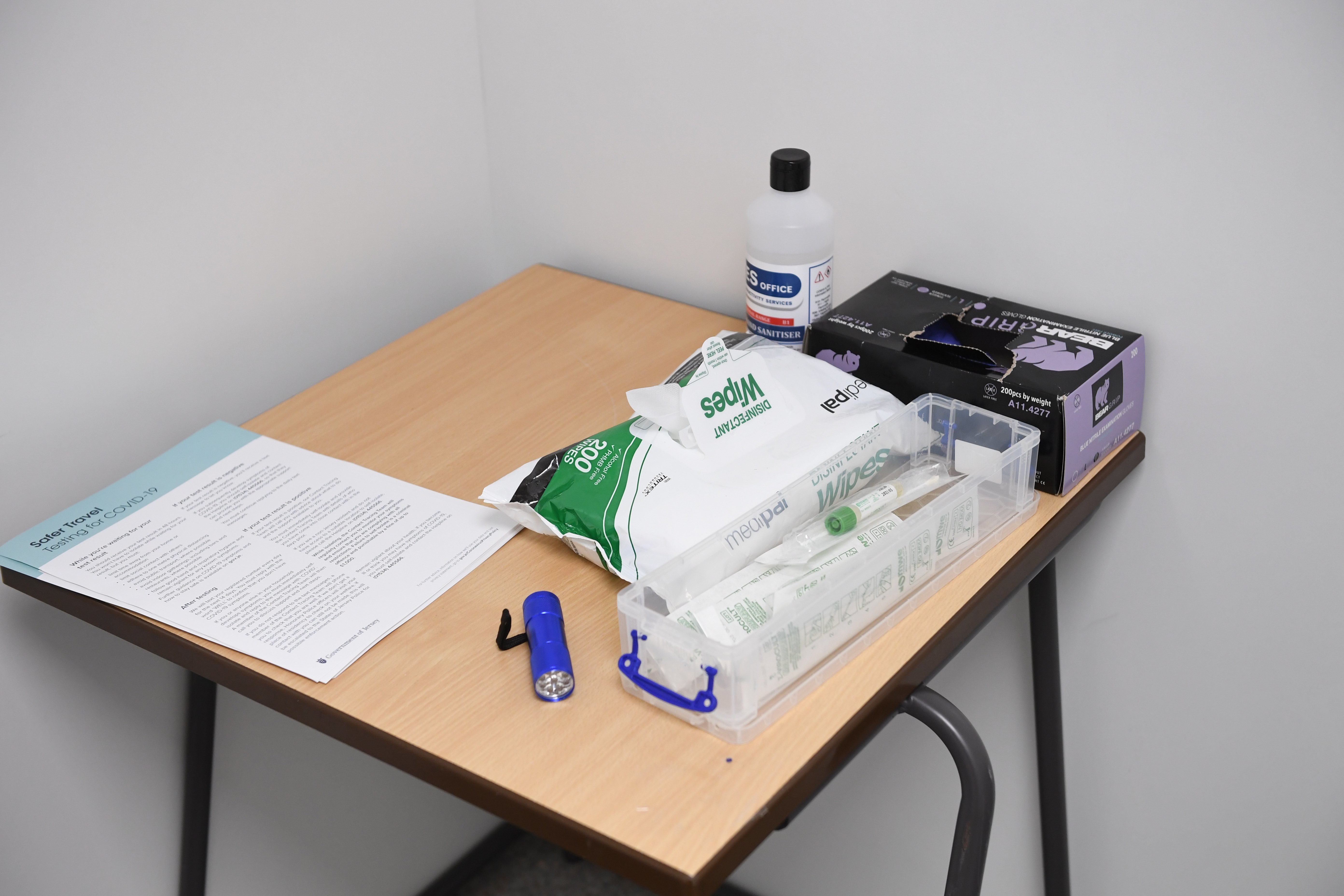 Anyone who tests positive should be called by the Contact Tracing Team and told to self-isolate for 14 days. Anyone they have had close contact with, including people they sat near while travelling, will also be contacted and told to isolate.

Positive tests should be returned more quickly than negatives, according to Mr Moretta. And plans to bring over a fully equipped and staffed testing laboratory could speed up the process even further.

‘We are also working on other options which are being trialled in the UK and allow things like saliva to be tested, which are particularly easier for children.’

A negative test is not the end of the process for people arriving in Jersey.

If they, or anyone else in their household develops symptoms, they must reply ‘COVID’, and a member of the Contact Tracing Team, which is currently made up of 55 people, will get in touch with them to discuss the next steps.

If someone does not respond to the text messages a member of the CTT will call them. If they do not get a response, honorary police officers will visit the address they have given to check on them. If contact still cannot be made, the matter will be passed to the States police for possible enforcement action.

Failure to self-isolate when required to do so is a criminal offence and punishable by a fine of up to £1,000.

Anyone who becomes ill or thinks they have symptoms of Covid-19 must self-isolate and contact the helpline on 445566.