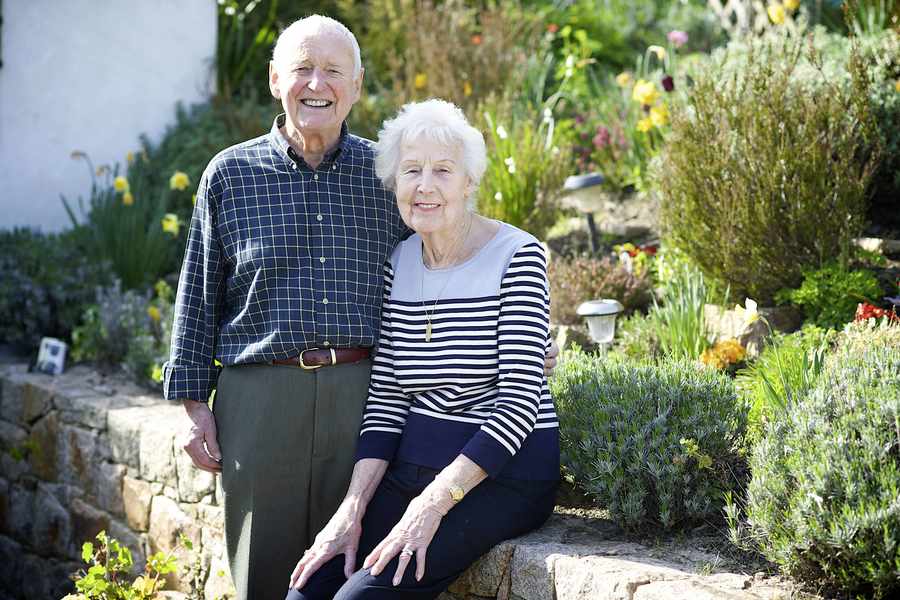 A SUPER-RICH Islander who is one of only a handful of people in the world who knows the secret KFC recipe has today told how he helped to bring the chain to Britain and turn it into a multi-million-pound business.

Ray Allen spoke to the JEP after a three-part documentary series entitled The Billion Dollar Chicken Shop, which showed life behind the scenes in several of the UK outlets, was aired on the BBC.

The 87-year-old, who has lived in Jersey since 1973 but has never previously spoken to the Island’s media about his key role in developing the chain, became a personal friend of KFC founder, Colonel Sanders, after meeting him at an International Restaurant Association conference in Chicago during the 1950s.

At the time, Mr Allen and his wife Shirley were running restaurants across their home county of Lancashire, and Mr Allen began to take an interest in the fast food side of the industry, opening several local branches of Wimpy.

After the chance meeting in Chicago, Mr Allen helped Colonel Sanders to establish the UK side of his empire while he was still a small-time restaurant owner in Louisville, Kentucky, and gave him valuable advice on the legal side of the business including patents.

Following the success of the first UK KFC in Preston, Mr Allen went on to establish 400 of the restaurants across the country within a ten-year period, and was paid to seek out suitable locations for other branches across the world.

He said: ‘The Colonel was a very kind man, who was very forthright. But at the time we met he was a small-time Southern State restaurant owner, and I knew a lot about patents or registered trade marks. From then on we became good friends and he even came to visit me and my family here in Jersey.’

Speaking from his home in the Island, Mr Allen said he has a personal hand-written copy of the secret recipe for the unique taste of KFC deep friend chicken which is believed to be made up of 11 herbs and spices, but insists it is ‘kept safe in a bank’.

He said he did not know the financial value of his copy of the recipe, but added that he would not sell it as it had been given to him by his friend.

AS HE relaxes in his immaculate granite home surrounded by perfectly manicured gardens, Islander Ray Allen sifts through boxes of photographs.

The pictures not only depict his early days with his wife, Shirley, at catering college and opening their first restaurants in Lancashire during the 1950s, but they also include shots of him with his personal friend, Colonel Sanders.

Mr Allen and the KFC founder were so close during the years when they worked together on turning the business into a worldwide multi-million-pound empire that the Colonel entrusted the Jersey resident with one of the world’s best-kept trade secrets – the recipe for his Kentucky Fried Chicken.

Only a handful of people in the world know the full recipe for KFC’s blend of 11 herbs and spices, and Mr Allen says he has a hand-written copy of the mixture, which he keeps safe in a bank vault.

Born in Blackpool in 1927, Mr Allen initially wanted to go into medicine as he enjoyed physics and chemistry at secondary school, but changed his mind when he failed the compulsory language part of his university entrance exam.

And his decision on his future plans was put on hold when he was called up to serve in the Second World War, joining the Royal Navy at the age of 18.

As a result of his scientific schooling, he was trained as a radar technician and stationed at the Naval base at Lossiemouth in Scotland, rising to the rank of Petty Officer within a few months.

Mr Allen said: ‘Radar was relatively new at the time, and I met lots of interesting people.’ 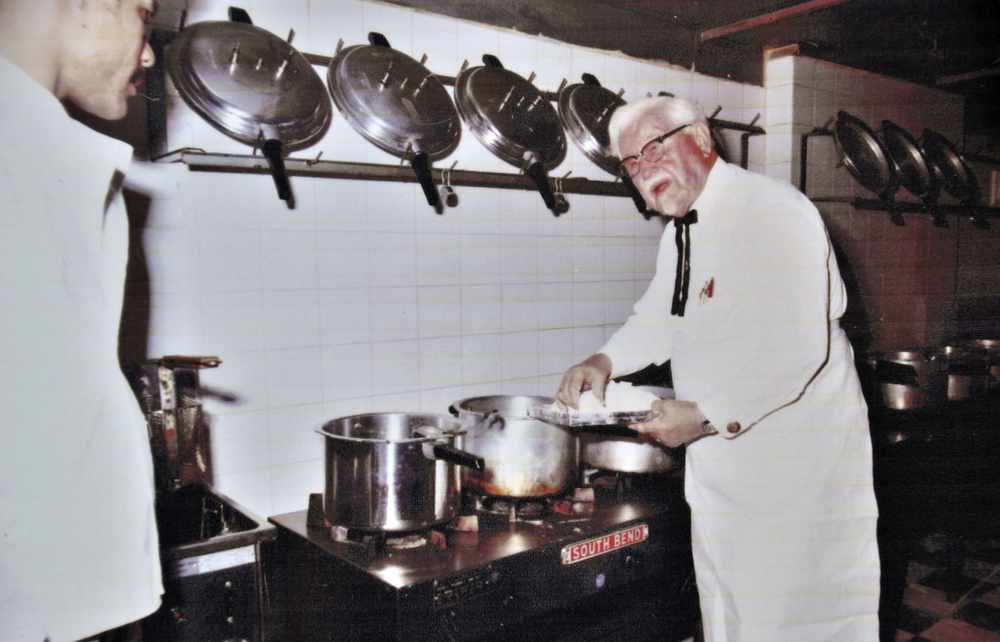 Upon leaving the Navy he returned to Blackpool and chose a career in hotel management, studying at the new catering college in the town.

Mr Allen met his wife at the college and on leaving, they opened their first restaurant together. It was called the Clifton Grill in

The couple got married in 1952 and opened several more restaurants in Bolton, Preston, and Blackburn, including The Black Sheep and The Lune Grill in Lancaster.

Mr Allen added: ‘I had about 15 restaurants. We worked six days a week and seven during the summer. They were long days and it was hard work.’

On the back of their early success, the couple decided to go into the Wimpy burger food chain, opening the first in the county.

However, Mr Allen’s life changed after he met American restaurateur Harland Sanders at an International Restaurant Association conference in Chicago during the 1960s. 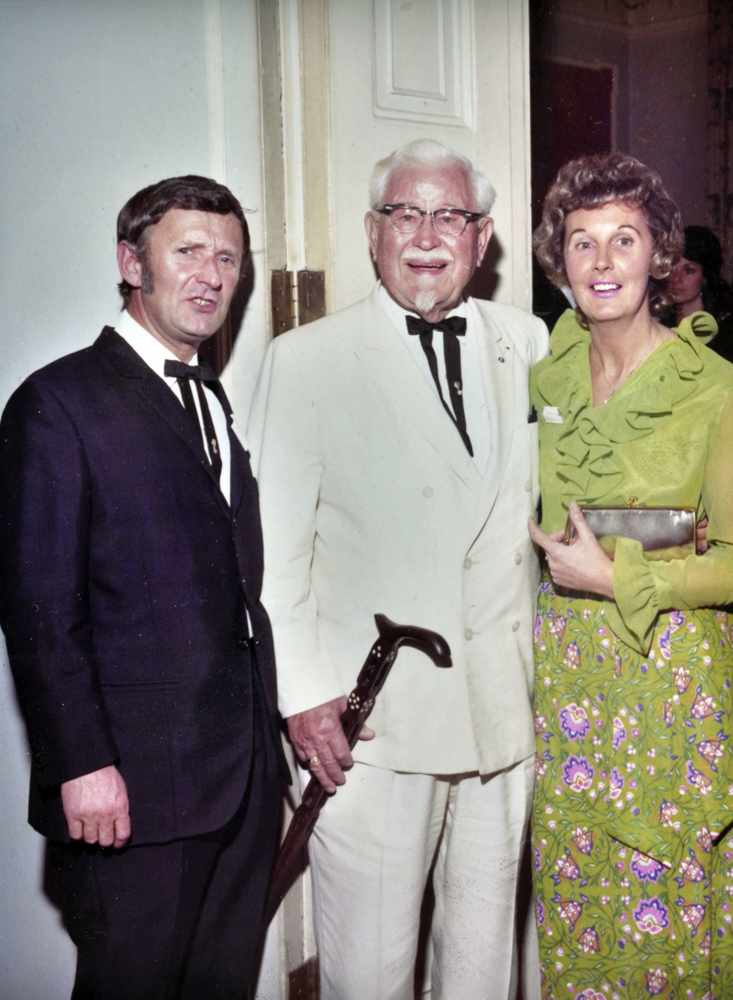 Mr Sanders had started his KFC business in 1930 at a service station in Corbin, Kentucky, where he began cooking for hungry travellers who stopped there for fuel, using a secret recipe for the coating of the restaurant’s fried chicken.

It became so popular that by 1935 the Governor of Kentucky made Mr Sanders a Kentucky Colonel in recognition of his promotion of the American state.

When Mr Allen met him, the Colonel had one franchisee in the USA, Pete Harman of Salt Lake City, who served Kentucky Fried Chicken as a menu item in his restaurant. At the time takeaway food was not yet the popular consumer product it was to become.

The restaurateur describes the Colonel as a very kind man, who was ‘very forthright’.

Fired with enthusiasm, Mr Allen acquired the rights to expand the KFC franchise outside the US, and returned home with big plans.

In 1965 he opened the first UK branch of the business in Preston.

‘It was slow to catch on at first because people didn’t know what it was,’ he said.

‘In the UK in those days chicken was something you ate for Sunday dinner. It was way before its time. We had to give it away to passers-by initially.

McDonalds had just come to England and it was a race between the companies to obtain the best locations.

‘We were opening one store a week out of our cash flow and in order to expand the franchise we went to London and walked the streets asking every bank for a loan, but we were turned down.

‘They would not loan us any money because they didn’t believe in it. They said there was no future in the product, but we knew it would work.’

Mr Allen’s company, KFC UK Ltd, was eventually able to obtain a loan from Heublein Inc, a USA company which at the time owned Smirnoff Vodka.

They made a deal with Mr Allen that he would sell his company to them once he had opened his 100th restaurant in London. He accepted and went about looking for the ideal locations for KFC restaurants all over the UK. Within ten years there were 400 branches up and down the country.

The restaurateur said: ‘It really is all about location. I surveyed every one of them. McDonald’s had just started out and wanted the same locations as us. We didn’t want to be beaten to it. With every location there were certain restrictions including things like cooking smells. 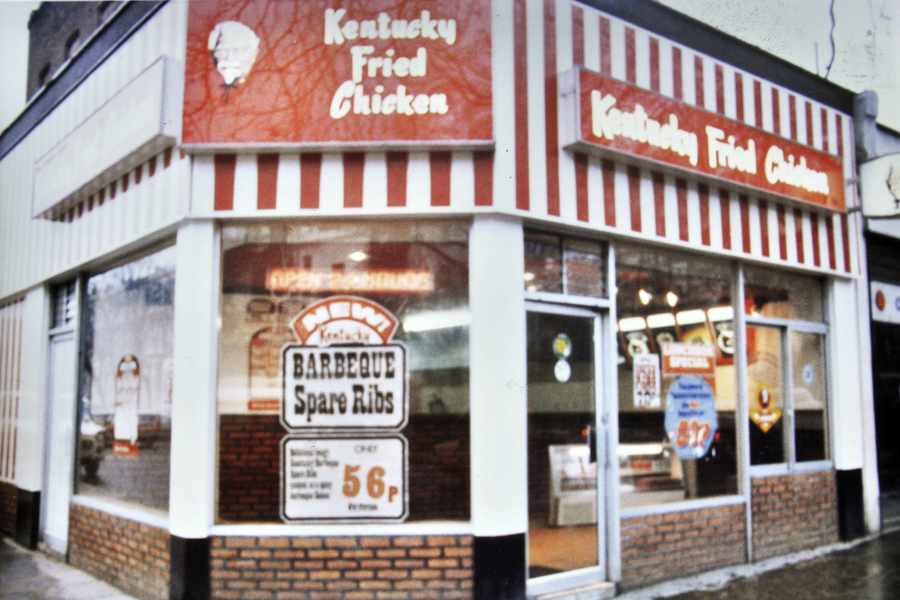 Mr Allen also worked on a contractual basis for the Colonel, touring the world including Australia, New Zealand and the Middle East, looking for sites for the company.

In recognition of his achievements in business, Mr Allen was named a Freeman of the City of London in 1979 and was commissioned a Kentucky Colonel in 1965.

Eventually, when he reached the 100th unit in London, Mr Allen was forced to sell his company to Heublein, which continued to expand and went on to open hundreds more restaurants.

A documentary series about the running of the UK side of KFC, entitled The Billion Dollar Chicken Shop, has recently been aired on the BBC.

After selling the business in 1973, Mr Allen and his wife moved to Jersey and went on to do a lot of travelling.

He said: ‘We have made a lot of good friends here in Jersey and we fitted in well. I live a very low-key life here. Our daughter and sons were all educated here in Jersey, and my daughter still lives here.’

Commenting on criticism that KFC has faced over allegations of low pay for staff and poor standards of welfare for the chickens they use, Mr Allen said the chain had changed completely since the early days.

‘I don’t believe in division between employees and managers.

‘When I was running the business the managers and staff were all partners in the business. You have to be fair to everybody and appreciate that they work hard for you and if you have done the jobs yourself you understand them.’