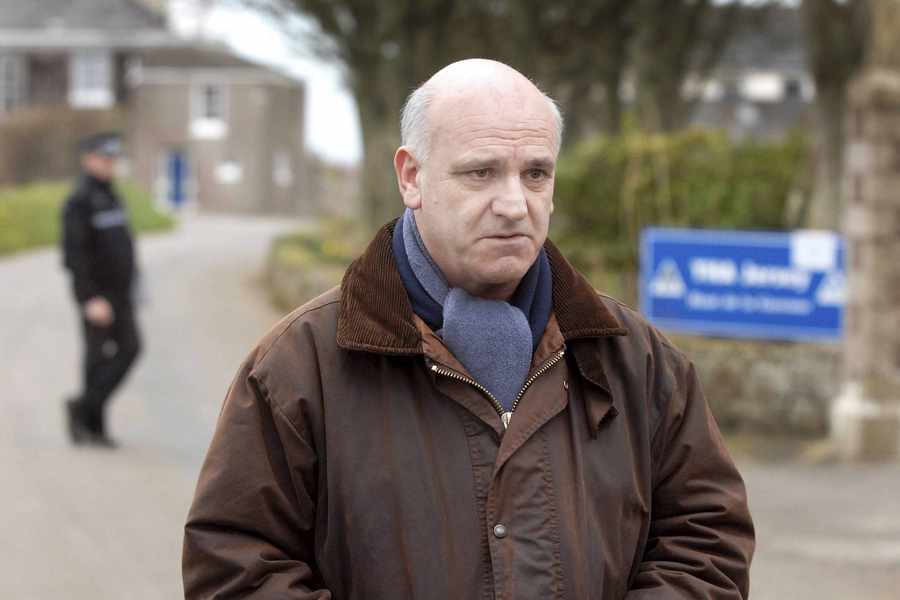 THE officer who spearheaded the police investigation into suspected child abuse at Haut de la Garenne has praised the Independent Jersey Care Inquiry and accused the External Relations Minister of attempting to derail the investigation.

Lenny Harper, a former Deputy Chief Officer of the States police, has criticised Senator Sir Philip Bailhache for speaking out against the decision to provide the inquiry with additional funding during a States debate this week.

Mr Harper claimed that the Senator, who held a number of senior legal positions during the period that the alleged abuse took place, might be scared of what the inquiry could uncover.

Earlier this week, the States agreed to provide an additional £14 million of funding for the inquiry into historical child abuse in the Island. The proposition, lodged by Chief Minister Ian Gorst, was passed by 35 votes to six, with Senator Bailhache abstaining.

The former deputy police chief, who came under fierce criticism in 2008 for the way in which the police investigation was managed, confirmed that he would be giving live evidence to the inquiry. He went on to say that although he supported the approval of the additional funding, the costs should be better managed.

Mr Harper added: ‘As in all such ventures, costs must be carefully accounted for. Within that proviso, the truth and justice must take precedence. Costs can be reduced in many ways – for instance, is it necessary for such an array of legal representation for States departments?

‘Overall, I have been very impressed with those members of the inquiry I have met. I am optimistic that they will get to the truth. The manner in which they are now being attacked, seems to suggest that some people are frightened about what may emerge. I see that Mr Bailhache was critical of the panel and its team in a number of ways.’

The inquiry is due to resume in the week beginning Monday 13 April. 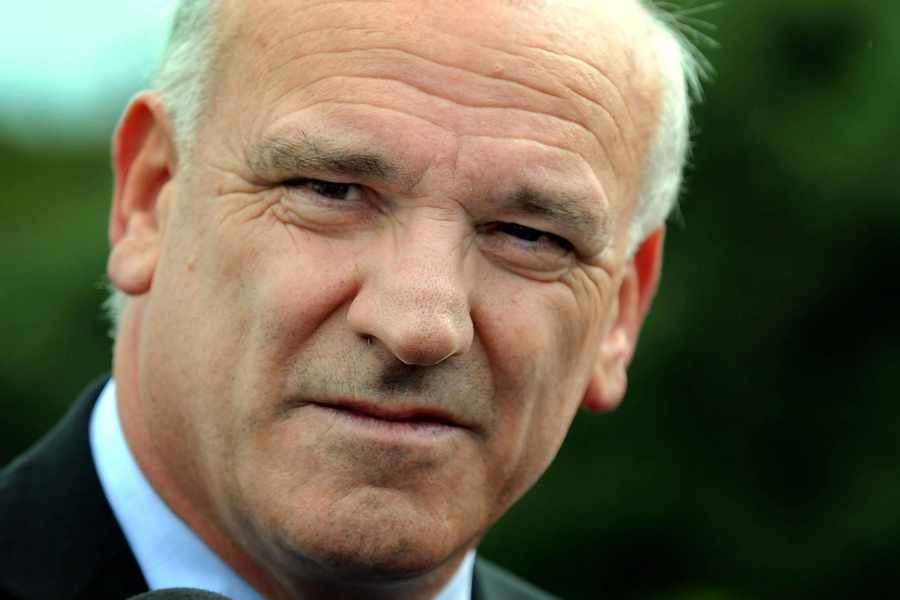 Will you be giving live evidence to the inquiry?

Yes, I will be giving live evidence.

If so, will you be coming back to give it in person?

That has yet to be decided.

Does the inquiry need a blank cheque?

Absolutely not. As in all such ventures, costs must be carefully accounted for. Within that proviso, the truth and justice must take precedence. Costs can be reduced in many ways – for instance, is it necessary for such an array of legal representation for states departments?

Should Senator Bailhache have had access to your statement?

If he was registered as an ‘Interested Party’ then he may have had access. However, to discuss it in the way he has would be a severe breach of the conditions of that access. If he is not registered as an interested party, then he and whoever supplied him with the information may well be in breach. The Committee of Inquiry are currently investigating the matter.

Should he have taken part in the debate?

Firstly, it is NOT a memorandum. It is a statement of evidence, signed, and with a declaration of truth. I don’t think the leak says anything about the Inquiry process. I think it says more about the lack of integrity of those persons who may have breached the clear conditions under which access is allowed. In every communication with Interested Parties, the COI remind us of the importance of confidentiality. Someone somewhere has breached this, and it was not done for the good of the victims.

What is your view of the inquiry to date and do you have faith that it will get to the truth?

Overall, I have been very impressed with those members of the Inquiry I have met. I am optimistic that they will get to the truth. The manner in which they are now being attacked, seems to suggest that some people are frightened about what may emerge. I see that Mr Bailhache was critical of the Panel and its team in a number of ways. He said they had no real incentive to be efficient, and were not really accountable to anyone, (although they seem to be efficient enough not to be reading confidential documents on a plane.) He states he wants a ‘more balanced account to come out than hitherto,’ and this can only be a swipe at the victims accounts.

I found Mr Bailhache’s speech to be a crude and infantile attempt to intimidate myself and others who have made statements to the COI, or who have yet to give evidence. I found his approach to the victims’ suffering dismissive and uncaring, his priority being the “unfairness” to suspected abusers. I found his claim that victims had been “generously compensated” to be insulting to those who had suffered so much. I wonder just whose definition of ‘generously’ he was thinking about. I also found his attempt to place all the blame for the cover ups on the institutions as laughable – when one looks at cases such as the Maguires, the responsibilities for the prosecution being withdrawn there went way past the institutions. Although there is something of an irony when he blames the institutions for cover ups, when one considers the Victoria College scandal.

TOWARDS the end of the year the then deputy police chief, Lenny Harper, announced that the States police were investigating alleged historical child abuse at former States children’s homes.

An appeal for information was also launched and the investigation was overseen by police chief Graham Power. 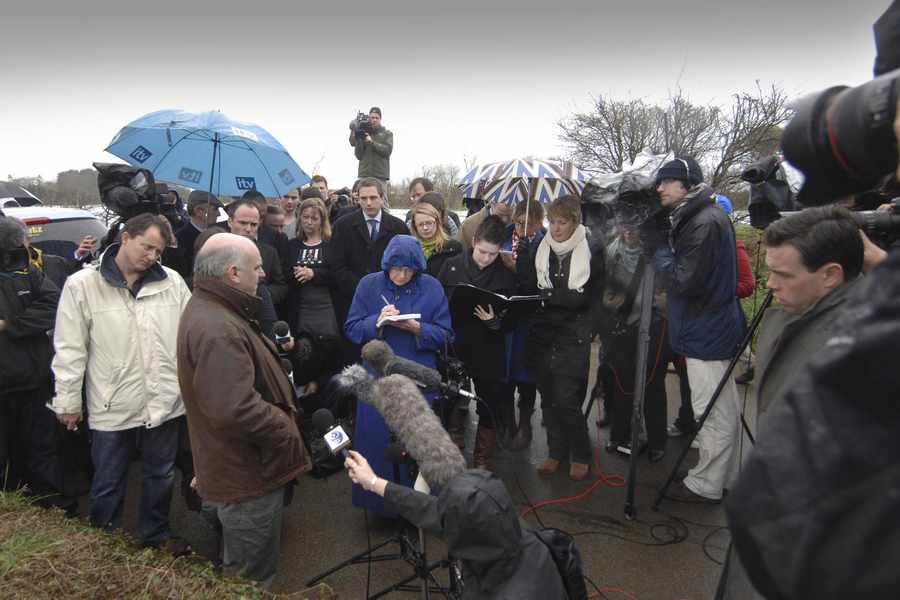 ARRESTS relating to the abuse investigation began to be made at the end of January.

A few months later Mr Harper, the senior investigating officer, revealed that his team was excavating the former children’s home at Haut de la Garenne and that they had found what appeared to be a fragment of bone.

The announcement led to a swathe of lurid headlines in national newspapers, which carried stories of child torture and possible murder. In August Mr Harper retired and was replaced by David Warcup, a former deputy chief constable of Northumbria police.

Towards the end of the year Mr Warcup and the investigation’s new senior officer, Detective Superintendent Mick Gradwell, said that after a review of the evidence gathered, no child murders took place at Haut de la Garenne.

They also concluded that no bodies had been hidden or burned.

At the same time police chief Graham Power was suspended for his alleged poor handling of the abuse inquiry, but a report later found that he had been removed without proper evidence of incompetence. 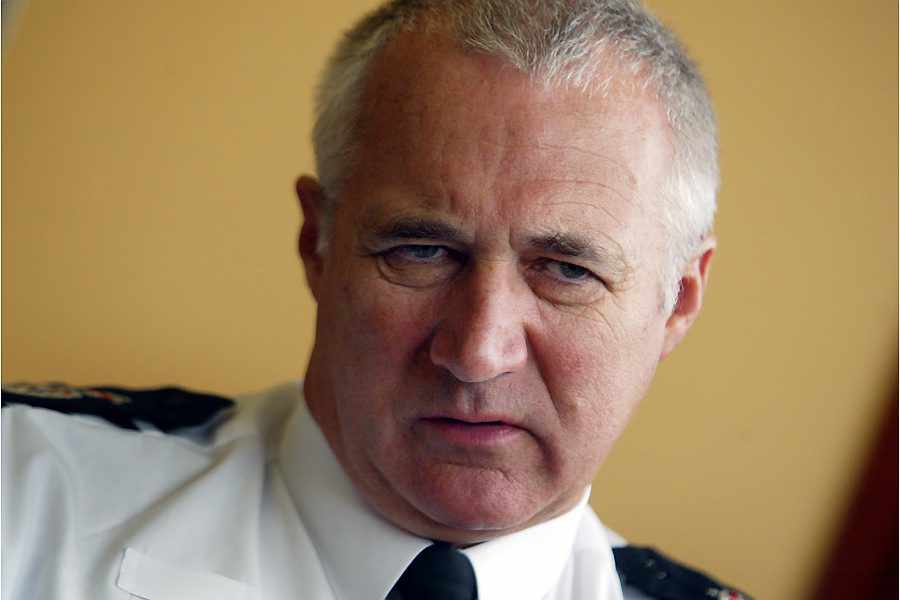 IN May the fragment of material said to potentially have been part of a child’s skull was sent to botanists at Kew Gardens at the request of Det Supt Gradwell.

The report that followed confirmed that it was, in fact, a piece of coconut.

Also, Islanders arrested and convicted of abuse offences as part of the investigation began to be sentenced in 2009 as well. 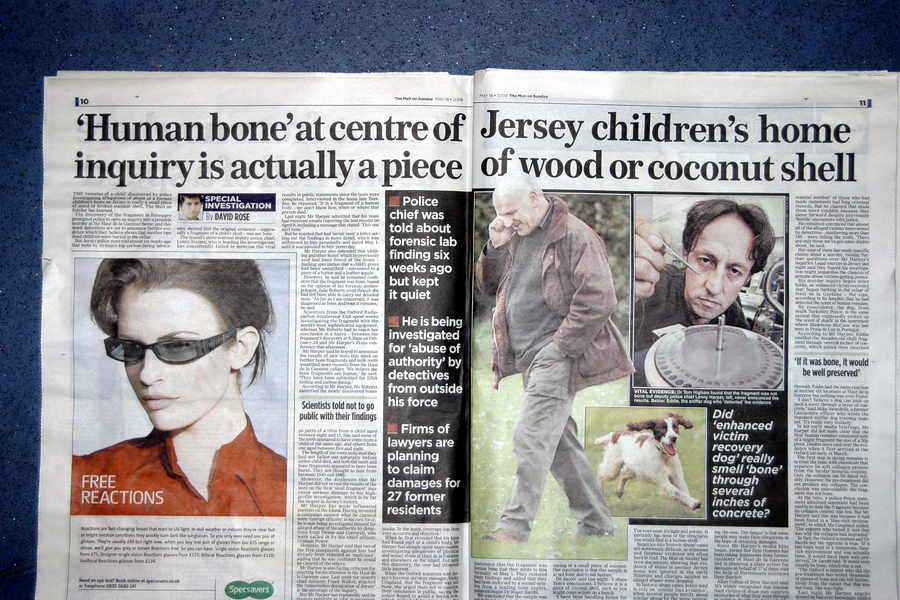 THE Wiltshire Constabulary’s report – an independent review of the handling of the Haut de la Garenne investigation into child abuse – was published in 2010.

It levelled strong criticism at former police chief Graham Power and his deputy, Lenny Harper, for their handling of the investigation.

The Royal Court secured convictions against the last people involved in the abuse investigation.

Following this, the victims of child abuse received a formal apology from the then Chief Minister, Terry Le Sueur, who said that they had been let down by the system.

In June, 40 people who claimed they had suffered abuse while in States care made compensation claims.

The year 2010 also saw a report into the financial management of the abuse investigation published in July.

It found that public funds had been misspent on expensive meals, accommodation and first-class travel.

It also emerged that the total police costs for the three-year investigation had reached £7.5 million. 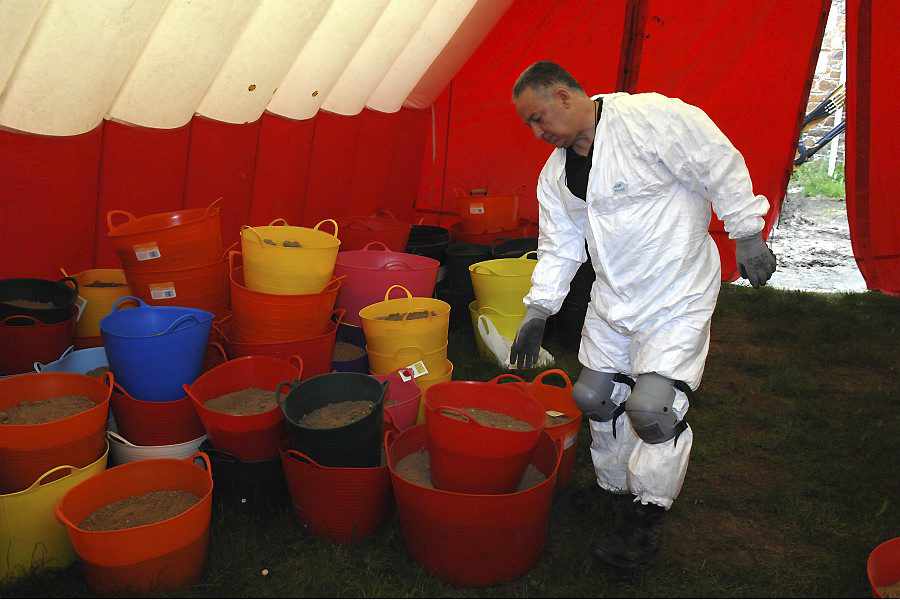 FOLLOWING a proposition brought by Senator Francis Le Gresley, the States agreed to hold an inquiry into allegations of historical child abuse after the Haut de la Garenne investigation.

AFTER a former Islander’s book was published, making claims of abuse at the former Grouville Girls’ Home, the police confirmed that six women had made complaints about the home to the force during the course of the historical child abuse investigation.

However, the police said that there was too little evidence in relation to the claims to mount a prosecution.

The author of the book, Jean Neil, included details of alleged abuse she suffered at the home between 1941 and 1951 in ‘Chairbound to Heavenbound’.

And 2012 also saw Jimmy Savile linked to Haut de la Garenne after pictures of the disgraced BBC star surfaced and were published in newspapers and online.

One online Daily Mail headline read: ‘Savile pictured at the Jersey House of Horrors: Paedophile DJ is surrounded by children at care home where 192 suffered abuse’.

IT was hoped that the public inquiry into historical child abuse would get going in 2013, but half-way through the year Sally Bradley QC, the States-appointed chairman of the Committee of Inquiry, suffered a stroke.

The inquiry was delayed while a new chairman was found.

A few months later Frances Oldham QC, a senior lawyer with extensive experience in dealing with cases involving sexual abuse, was appointed to lead the inquiry. 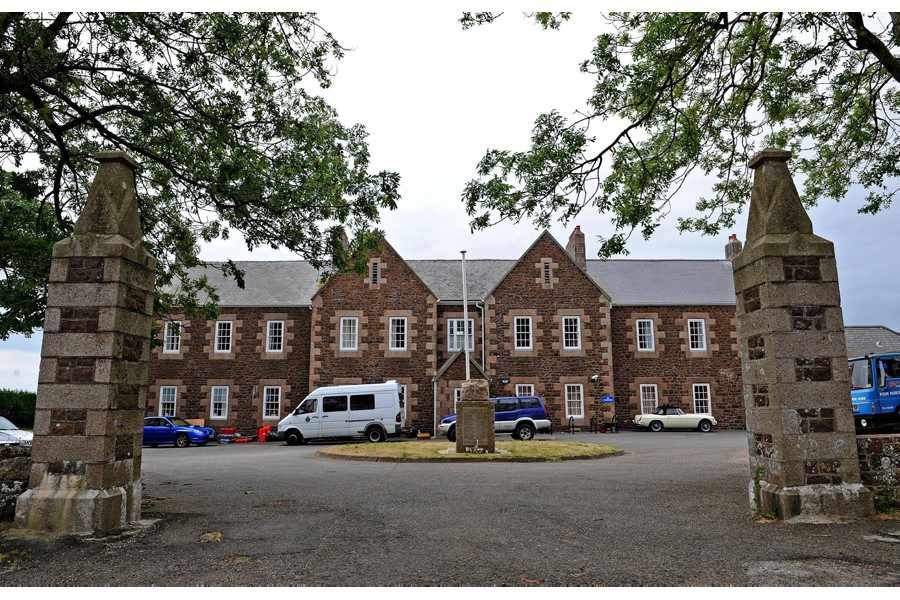 She was joined by abuse inquiry panel members Alyson Leslie, who has led serious case reviews into child abuse, and Sandy Cameron CBE, a former director of social work in Scotland.

In one of the last States sittings of the year, it was revealed that 64 per cent of claims for compensation for historical abuse had been settled.

Chief Minister Ian Gorst said that 131 claims had been received, 84 offers of compensation had been accepted, with 47 cases still under consideration.

Ms Oldham opened the inquiry and set out the terms of reference for proceedings. Hundreds of witnesses began giving evidence to the inquiry, both in written and verbal submissions, and the costs were increased from £6m to £9m. 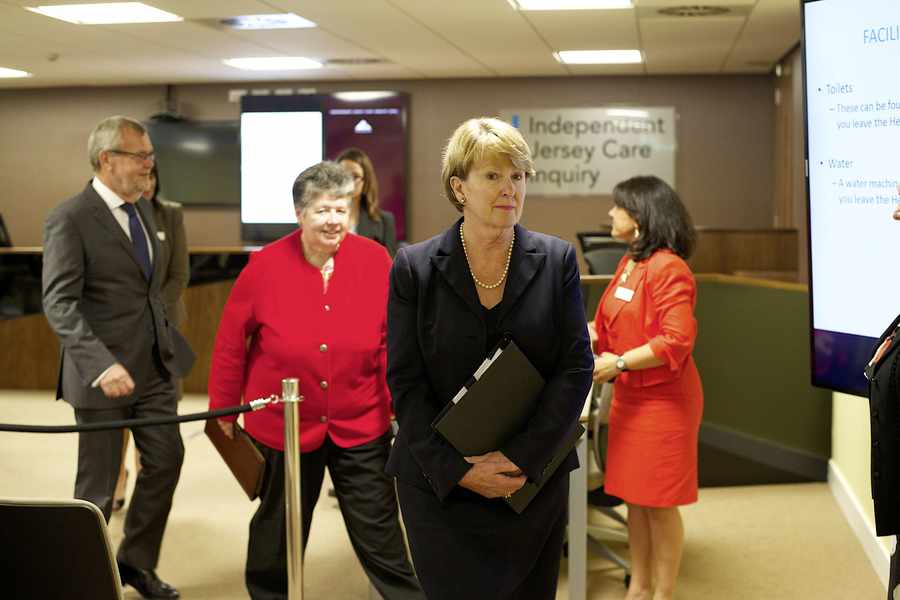