New cycle path in the east 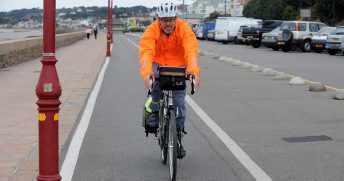 Deputy Caroline Labey who has been working on the project for a number of years said: “I think if there is a safer and more pleasant route to St.Helier, more people will cycle”.

This is absolutely correct, one has only to look at the amount of use that the western cycle route has, to see the potential of a cycle route out east.

Take a look at this: http://www.youtube.com/watch?v+ovmYuKcvau8&feature_player_embedded

I love the quote from Grouville Constable Dan Murphy about the new cycle track being built at Gorey. Mr Murphy, who opposed the track, said: ‘I hope it’s going to be used, considering we are spending half a million pounds on it.’ Bah Humbug!

Arthur Lamy is a freelance writer and tourist guide: www.cycleinjersey.com