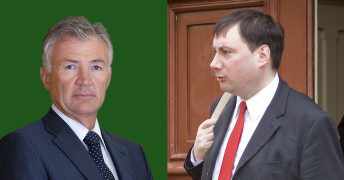 THE States resembled a school playground yesterday as foul language and personal insults flew across the Chamber.

After days of personal animosities being vented in e-mails between States Members, the tensions erupted publicly in a bitter question time. Senator Stuart Syvret stopped proceedings in mid-flow to complain to the Deputy Bailiff, Michael Birt, that the Health Minister was whispering abusive language in his ear. He alleged that Senator Jim Perchard had told him to ‘go and top himself’.

Mr Birt, who was chairing the sitting, called on the St Helier Deputy to retract her allegations, but she repeatedly refused. Her attack was echoed by her husband, Jersey Democratic Alliance chairman Deputy Trevor Pitman, who questioned Senator Le Main’s integrity and competence.

The unpleasant exchanges began during question time as Environment Minister Freddie Cohen was answering a question. Senator Syvret stood up and said: ‘On a point of order, I am sorry to interrupt the minister. But the minister to my right, Senator Perchard, is saying in my ear “you are full of f*****g s**t, why don’t you go and top yourself, you bastard”.’

Senator Perchard immediately responded by saying: ‘I absolutely refute that. I am just fed up with this man making up allegations against people. I just wish he would not.’