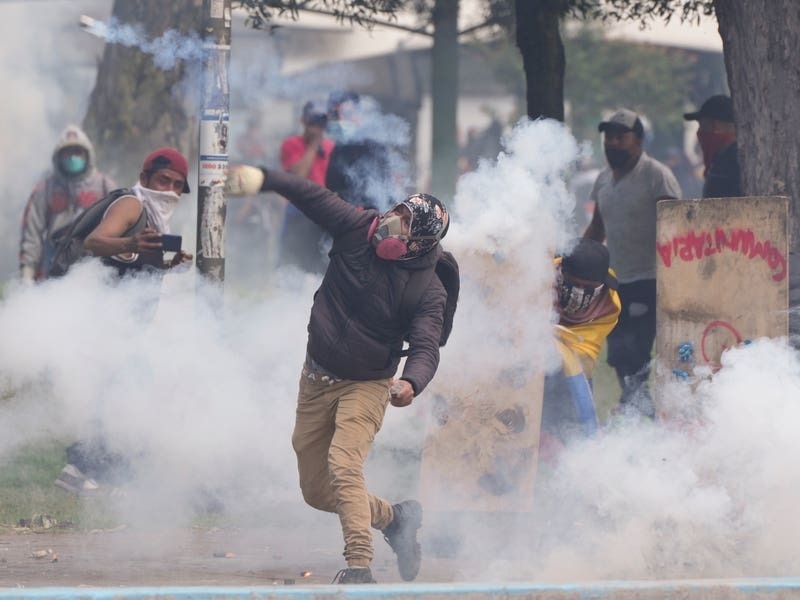 One man was killed and dozens hurt during the 12th day of protests led by Indigenous people demanding that Ecuador’s government cut fuel prices, put price controls on food and spend more on education.

After several days of increasing violence, demonstrators clashed with soldiers and riot police in Quito and other cities in the Andean country.

The Confederation of Indigenous Nationalities, which has organised the national strike, said a demonstrator died of pellet wounds in the chest and abdomen while protesting near the National Assembly.

Authorities acknowledged there was one death, and interior minister Patricio Carrillo said they were “dismayed”.

He said the government had not provided any pellet guns to police personnel and that on Thursday they were carrying only gas to disperse protesters.

The demonstrations are part of a national strike that the Confederation of Indigenous Nationalities began on June 14 to demand that petrol prices be cut, price controls be put on agricultural products and a larger budget be adopted for education.

Protests have been especially violent in six provinces in north-central Ecuador.

Indigenous leader Leonidas Iza on Tuesday demanded that the government lift the state of emergency in those provinces and remove the military and police presence around places where protesters have gathered in Quito.

But the government rejected the demands on Wednesday, saying meeting them would leave “the capital defenceless”.

Quito is experiencing food and fuel shortages because of protester roadblocks and other disruptions from the unrest.