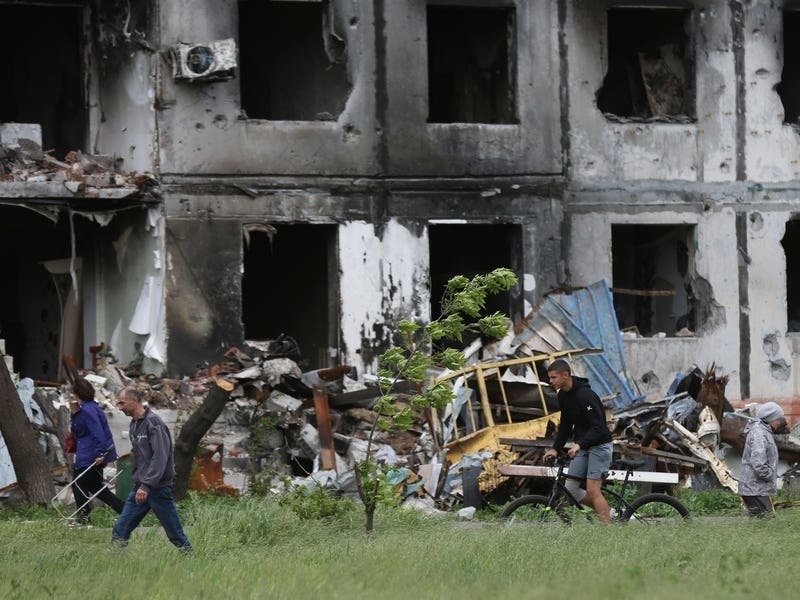 Russia was pressing its offensive in Ukraine’s eastern Donbas region as Poland’s president travelled to Kyiv to support the country’s western aspirations and became the first foreign leader to address the Ukrainian parliament since the start of the war.

Ukrainian lawmakers stood to applaud Polish president Andrzej Duda, who thanked them for the honour of speaking in a place where “the heart of a free, independent and democratic Ukraine beats”.

Mr Duda received more applause when he said that to end the conflict, Ukraine did not need to submit to conditions given by Russian president Vladimir Putin.

Mr Duda’s visit, his second to Ukraine’s capital since April, came as Russian and Ukrainian forces engaged in battles scattered along a 342-mile (551km) wedge of the country’s eastern industrial heartland, and as Ukraine pursues European Union membership.

To bolster its defence against the invasion, Ukraine’s parliament voted on Sunday to extend martial law and the mobilisation of armed forces for a third time, until August 23.

In a Saturday night video address to the nation, Ukrainian president Volodymyr Zelensky described the situation in the Donbas as “really hard”, but he said his country’s ability to withstand nearly three months of full-scale war against Russia was “good news”.

Mr Zelensky stressed on Saturday that the 27-member European Union should consider Ukraine’s desire to join the bloc as soon as possible within the context of Russia’s invasion.

“I want to emphasise that our European integration path is not just about politics,” Mr Zelensky said. “It’s about quality of life. And about the fact that Ukrainians perceive the values of life in the same way as the vast majority of Europeans.”

Poland has welcomed millions of Ukrainian refugees and become a gateway for western humanitarian aid and weapons going into Ukraine. It is also a transit point into Ukraine for some foreign fighters, including from Belarus, who have volunteered to fight against the Russian forces.

“Despite the great destruction, despite the terrible crime and great suffering that the Ukrainian people suffered every day, the Russian invaders did not break you. They failed at it. And I believe deeply that they will never succeed,” he told the Verkhovna Rada, Ukraine’s legislature.

“I want to say it with all my might: The free world has the face of Ukraine today.”

Luhansk governor Serhii Haidai said the only functioning hospital in the city had just three doctors and enough supplies for 10 days.

The UK Ministry of Defence said on Sunday that Russia’s only operational company of BMP-T Terminator tank support vehicles, which are designed to protect main battle tanks, “has likely been deployed to the Sievierodonetsk axis of the Donbas offensive”.

But it said that with a maximum of 10 of the vehicles deployed, “they are unlikely to have a significant impact on the campaign”.

With Russia claiming to have taken nearly 2,500 Ukrainian fighters from the besieged Mariupol steel plant prisoner, concerns grew about their fate and that of the city’s remaining residents. Mariupol is now in ruins, with more than 20,000 residents feared dead.

Family members of the fighters, who came from a variety of military and law enforcement units, have pleaded for them to be given rights as prisoners of war and eventually returned to Ukraine. Deputy prime minister Iryna Vereshchuk said on Saturday that Ukraine would “fight for the return” of every one of them.

The Azovstal steel plant was for weeks the last defensive holdout in Mariupol and became a symbol of Ukrainian tenacity. Its seizure gave Mr Putin a badly wanted victory in the war he began nearly three months ago.

Denis Pushilin, the pro-Kremlin head of the self-proclaimed Donetsk People’s Republic, vowed the Ukrainian fighters from the plant would face tribunals. He said the fighters included some foreign nationals but did not provide details.

The Ukrainian government has not commented on Russia’s claim of capturing Azovstal. Ukraine’s military had told the fighters their mission was complete and they could come out. It described their extraction as an evacuation, not a mass surrender.

France’s European affairs minister Clement Beaune said later on Sunday that it would be a “long time” before Ukraine gained EU membership, estimating it could take up to two decades.

“We have to be honest,” he said. “If you say Ukraine is going to join the EU in six months, or a year or two, you’re lying.”

Johnson says the issue of the Tory leadership is ‘settled’