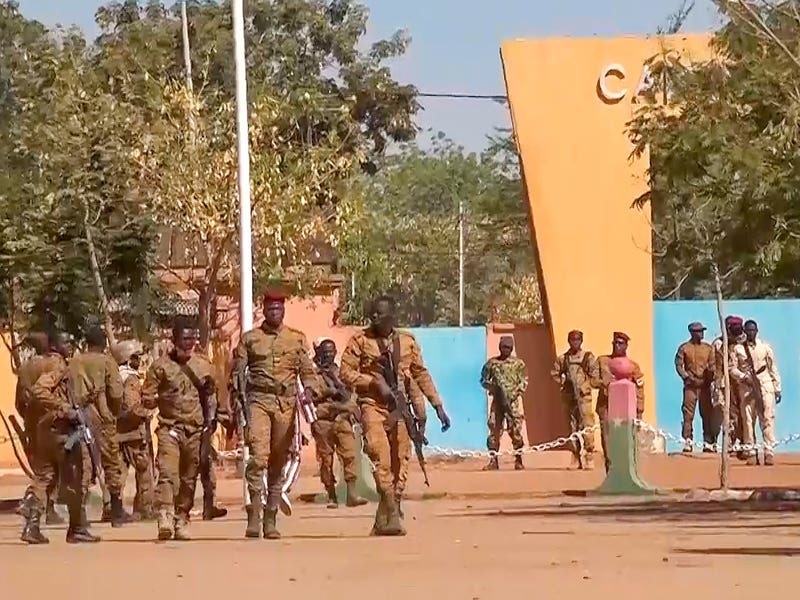 More than a dozen mutinous soldiers have declared on state television that a military junta has seized control of Burkina Faso after the democratically elected president was detained following a day of gun battles in the capital.

Captain Sidsore Kaber Ouedraogo said that the Patriotic Movement for Safeguarding and Restoration would work to establish a calendar “acceptable to everyone” for holding new elections.

He did not give details.

The statements came soon after the ruling political party warned that soldiers had nearly completed a coup in the West African nation after trying to assassinate President Roch Marc Christian Kabore and taking control of public airwaves.

The soldiers said the embattled president had been detained, but a statement on his Twitter account did not address whether he was in their custody.

“What appeared to be a simple mutiny by a few elements of the army” on Sunday was “moving hourly towards a military coup against our hard-won democracy,” said the statement issued by Mr Kabore’s party.

The country’s democracy is “being held hostage by a group of armed men with ulterior motives”, the party warned.

The ruling party accused the mutinous soldiers of trying to assassinate Mr Kabore and another government minister and said the presidential palace in Ouagadougou remained surrounded by “heavily armed and hooded men”.

The president’s tweet called on the soldiers to put down their arms, though it could not be confirmed whether he posted the statement himself.

Two soldiers told the Associated Press (AP) that they were holding the leader, but they would not say where they were keeping him.

Gunfire erupted early on Sunday when soldiers took control of a major military barracks in the capital Ouagadougou.

Burkina Faso has seen a series of anti-government protests as anger has mounted over the handling of the Islamic insurgency.

Groups of people celebrated again in the streets of the capital on Monday morning after reports of Mr Kabore’s capture.

He was re-elected in November 2020, but frustration has been growing at his inability to stem the spread of jihadist violence across the country.

Attacks linked to al Qaida and the Islamic State group are escalating, killing thousands and displacing more than an estimated 1.5 million people.

The military has suffered losses since the extremist violence began in 2016.

In December, more than 50 security forces were killed and nine more died in November.

Among their demands are more forces in the battle against extremists and better care for the wounded and the families of the dead.

About 100 military members have planned the takeover since August, according to one of the mutinous soldiers.

Sahel experts say the government was overstretched, but it is unlikely the mutiny will change anything.

“Burkina Faso’s army is profoundly ill-equipped and unprepared for the war it’s asked to fight. It’s out of its depth. Its frustration with an equally out-of-its-depth government is understandable. Regrettably, this is unlikely to improve anything,” said Michael Shurkin, a former political analyst at the CIA and director of global programmes at 14 North Strategies, a business intelligence consultancy based in Senegal.

But as protests over the weekend and on Monday showed, discontent among the general population is also growing.

“People are tired with this situation of insecurity. Every day, people are killed. In Burkina, there are areas that can’t be accessed. We have lost a big part of our territory,” said Jean-Baptiste Ilboudou, a civilian who was biking near the military base when gunshots were heard.

The West African regional bloc known as ECOWAS, which has already suspended Mali and Guinea in the past 18 months over military coups, issued a statement of support for Burkina Faso’s embattled president and urged dialogue with the mutineers.

Earlier this month, authorities arrested a group of soldiers accused of participating in a foiled coup plot.

It was not immediately known whether there was any connection between those soldiers and the ones rebelling now.

Military prosecutors said nine soldiers and two civilians were being held in connection with the plot.

And in 2015, soldiers loyal to him attempted to overthrow the transitional government put into place after his ousting.

The army was ultimately able to put the transitional authorities back in power, who led again until Mr Kabore won an election and took office.