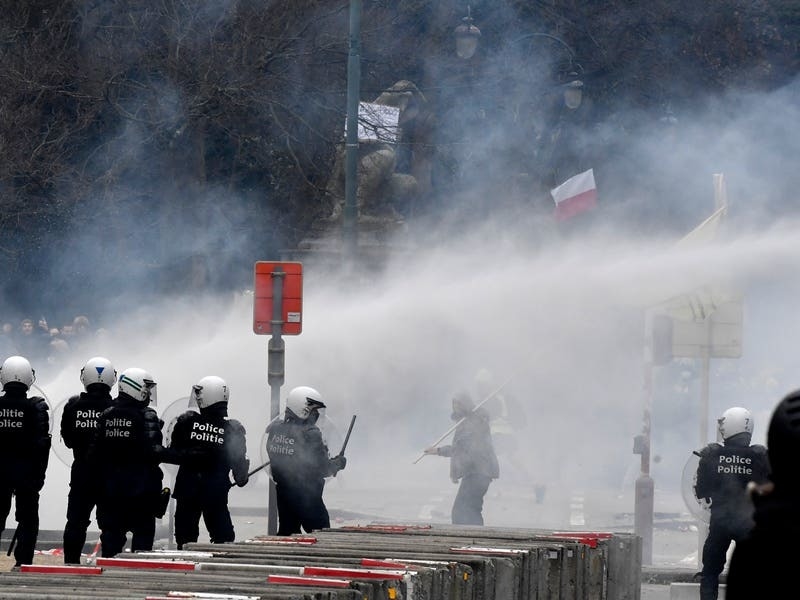 Police have fired water cannons and tear gas in Brussels to disperse protesters marching against Covid-19 vaccinations and restrictions.

The protest drew tens of thousands of people, some traveling from France, Germany and other countries to take part.

Protesters yelled “Liberty!” as they marched and some had violent confrontations with police.

White-helmeted police riot officers later sought to disperse protesters, who ignored instructions broadcast over loudspeakers that the demonstration was finished and that they should leave.

Police water cannons fired powerful jets at protesters, while thick clouds of smoke and snaking trails of gas filled the air in the Belgian capital.

A protest leader broadcasting over a loudspeaker yelled, “Come on people! Don’t let them take away your rights!” as police officers faced off against demonstrators who hurled projectiles and insults.

Anti-vaccination demonstrators also marched in Barcelona, where protesters wore costumes and waved banners reading “It’s not a pandemic, it’s a dictatorship,” as they marched against against restrictions imposed by both national and regional authorities to curb a surge in Covid-19 cases fuelled by the omicron variant.

Spain, a country of 47 million, has officially recorded over 9 million coronavirus cases, although the real number is believed to be much higher. Nearly 92,000 people have died in Spain since the beginning of the pandemic.

With more than 80% of Spain’s residents vaccinated, experts have credited the jabs for saving thousands of lives and averting the total collapse of its public health system.