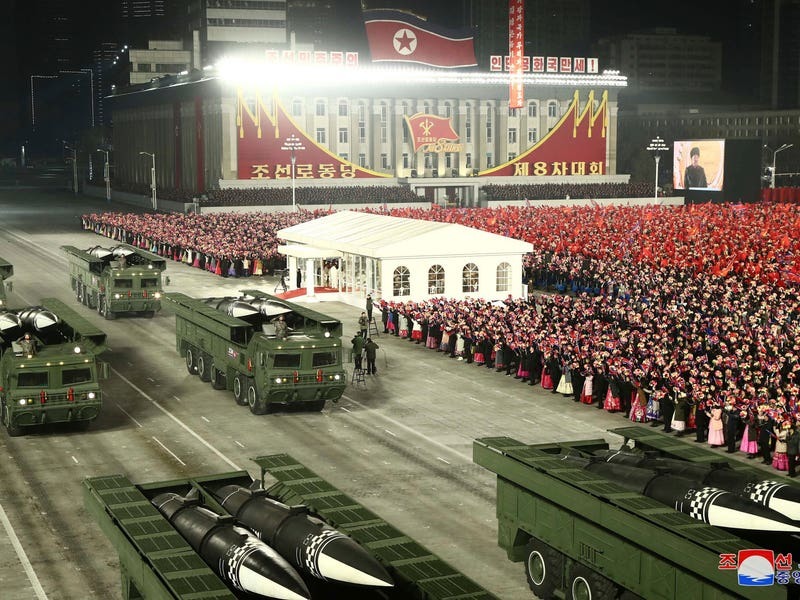 State media said Mr Kim took centre stage in Thursday night’s parade celebrating a major ruling party meeting in which he vowed maximum efforts to bolster the nuclear and missile programme that threatens Asian rivals and the American homeland to counter what he described as US hostility.

The economic setbacks have left Mr Kim with nothing to show for his ambitious diplomacy with Donald Trump, which was derailed over disagreements about sanctions relief in exchange for North Korean denuclearisation steps, and pushed Mr Kim to the toughest moment of his nine-year rule.

Mr Kim’s comments are intended to pressure the incoming US government of Joe Biden, who has previously called the North Korean leader a “thug” and accused Mr Trump of chasing spectacle rather than meaningful curbs on the North’s nuclear capabilities.

North Korean state TV on Friday aired edited footage of the parade which showed thousands of civilians and troops roaring and fireworks exploding overhead as Mr Kim stepped out of a building and took his spot at a podium in Kim Il Sung Square, named after his grandfather and the country’s founder.

His defence minister, Kim Jong Gwan, said in a speech that North Korea’s military would “pre-emptively marshal our greatest might to thoroughly punish hostiles forces” if they threaten the North’s safety.

Military aircraft flew in formation across the dark sky, using what appeared to be flares to form the symbol of the Workers’ Party — a hammer, brush and sickle.

The new type of submarine-launched missiles was larger than the ones North Korea previously tested.

The North also displayed a variety of solid-fuel weapons designed to be fired from mobile land launchers, which potentially expand its capability to strike targets in South Korea and Japan, including US military bases.

KCNA said the parade featured other missiles capable of “thoroughly annihilating enemies in a pre-emptive way outside (our) territory”.