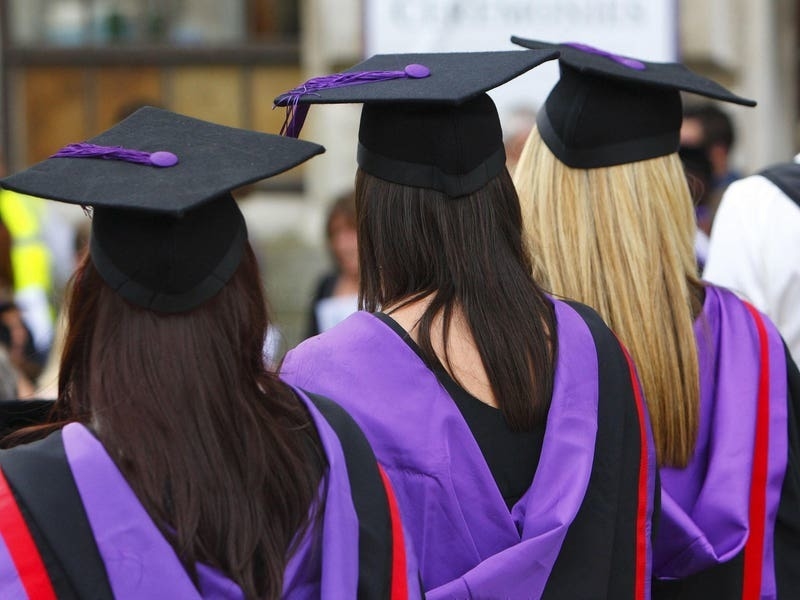 Nearly one in four students say they are less likely to finish their degree as a result of the cost of living crisis, a survey suggests.

More than three in five (63%) students are spending less on food and essentials this academic year as a result of increases in the cost of living, according to a Sutton Trust report.

Over a quarter (28%) of students say they have skipped meals to save on food costs,  and students from working class families (33%) were more likely to report skipping meals than their peers, the survey found.

The social mobility charity is calling on the Government to review the amount of support available to students so they can afford to take part in courses.

Students report stopping or reducing going out with friends (47%) and using less fuel, such as electricity or gas, in their homes (43%), while 6% report moving back in with their family to save money on rent or bills.

Nearly a fifth (18%) say they are avoiding buying university supplies they need for their course, such as laptops and textbooks, while 9% are stopping or reducing attendance at university societies.

Many students (45%) are turning to parents for additional financial support, the survey reveals, while 4% have taken out additional private loans and 2% have used a food bank or other charity support.

One student from England, who has skipped meals and reduced socialising, said: “The cost of living crisis is making me worried and stressed as I’ve now had to sacrifice my study time to get a job to support my financial needs.

“Balancing all-day university clinical placements and working is impacting my academics. I come from a low-income household so I haven’t got the ability to ask my family for financial support.”

“I once missed a university lecture as I was not able to leave the house in time for the train due to having to go out and get electricity.”

A student from the south-west England, who reached out to their university for financial support, said they found the application process “long-winded”.

They said: “I was fortunate to receive some money, however, it’s not a system I could trust if I needed support in an emergency.”

The Department for Education (DfE) announced this month that universities would be given an additional £15 million in funding this year to help ease cost-of-living pressures for disadvantaged students.

It also announced that tuition fees for degrees in England would be frozen at a maximum level of £9,250 for the next two years and maximum student loans for living costs would rise by 2.8% in 2023/24.

Sir Peter Lampl, founder and chairman of the Sutton Trust, said: “Today’s polling shows the serious impact of the cost-of-living crisis on students.

“It is scandalous that students are skipping meals and having to cut back on essentials, and that a staggering quarter of students say they are now less likely to finish their degree as a result of the crisis.

“To make sure that students can afford to fully take part in their course and wider university life, the Sutton Trust is calling for the government to urgently review the amount of funding and support available to students.”

Jo Grady, general secretary of the University and College Union (UCU), said “Ministers first ignored student pleas for urgent financial help, only to then provide an abject package of support which will do next to nothing to help them through the cost of living crisis.

“Students are skipping meals and one in four are talking about leaving higher education entirely. If that doesn’t wake Government up to the scale of the crisis facing students in our universities, nothing will.”

Labour’s shadow higher education minister Matt Western said: “This cost-of-living crisis made in Downing Street is squeezing student budgets like never before, threatening students’ ability to complete their courses and achieve their ambitions.

“The scale of the crisis has been building for months after the Conservatives crashed the economy, yet ministers have failed to take the action necessary to support students.”

“Yet the student maintenance package in England is at its lowest value in seven years, and the Government’s planned uplift for next year does not go far enough to make up for the real-terms cut to maintenance that students have experienced since inflation began to rapidly increase.

“These are difficult times for students, especially those from low-income backgrounds, with caring responsibilities or estranged from families, and we need to look more closely at how well the current system is supporting students and what changes need to be made.”

A DfE spokesperson said: “We recognise students continue to face financial challenges, which is why we are increasing loans and grants for living and other costs for a further year.

“To support universities to top up their own hardship funds we are also making an additional £15 million available. This will bring the total available to universities to draw on in supporting their students in hardship to £276 million this academic year.

“We are pleased so many universities are already stepping up efforts to support their students through a variety of programmes. These schemes have already helped students up and down the country and we urge any student who is worried about their circumstances to speak to their university.”