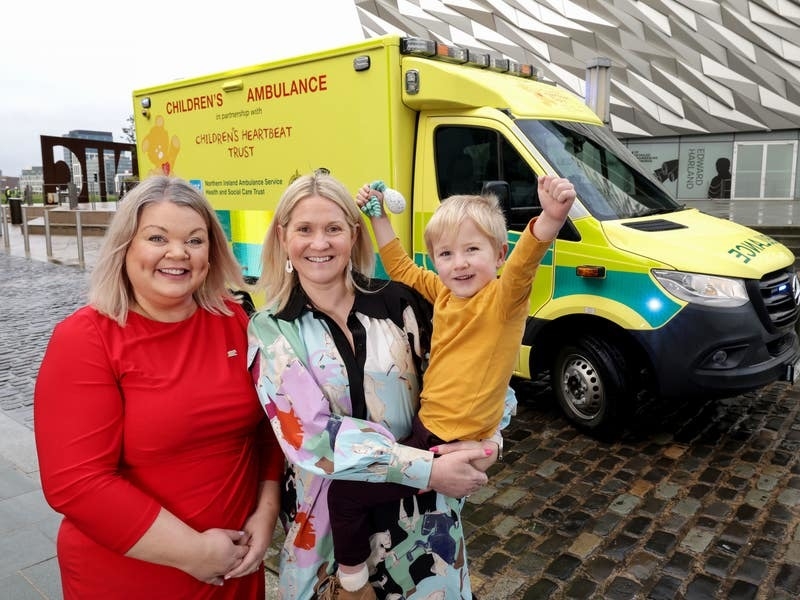 Kitted out with features to entertain children with heart disease on long often anxious journeys as well as life-saving equipment, it has been dubbed by one five-year-old from Lisburn as his “battleship”.

Work ahead of the launch of the bespoke vehicle has been ongoing since 2020 by the charity the Children’s Heartbeat Trust, which supports families of children with heart disease.

In Northern Ireland, approximately 200 children are born with congenital heart disease every year, which often means frequent trips to Dublin and beyond for the children to receive specialist medical treatment including surgery.

Most of the trips (87%) involved children under the age of one, with the remaining journeys made by children and young people aged between one and 16 years old.

After a fundraising campaign in 2021 raised more than £133,000, the £126,466 bespoke ambulance was commissioned by the charity and the Northern Ireland Ambulance Service, with support from the NIStar service.

It features space-themed decor on the interior walls, sensory equipment to calm younger children and PlayStation and tablet facilities to help entertain young people during the journey, as well as the latest specialist medical equipment.

The vehicle is also adapted with wheelchair tracks, enabling older children to make the journey in a wheelchair as opposed to a trolley.

Among those who will be using the service is five-year-old Fionn McInerney from Lisburn, Co Antrim, who has Tricuspid Atresia Hypoplastic Right Heart Syndrome.

His mother Edel McInerney said the new ambulance will be “life-changing” and will have a “phenomenal” impact on her family and others.

Since Fionn was born, the family has had to make multiple journeys to Dublin for scheduled and emergency surgeries.

“Essentially, only one side of Fionn’s heart works. His oxygen levels are low and he needs regular visits and tests at the Clarke Clinic Cardiology Department,” Ms McInerney explained.

“Thinking back to the early days, those trips to Dublin were terrifying – it was literally life and death. I always worried that he would wake up and see the tubes and hear the beeping of the machines.

“He was oblivious then, but now he’s more aware of his surroundings, which leads to a lot of fear.”

“Having a purpose-built children’s ambulance with all the critical life-saving equipment and the added sensory and playful atmosphere will help to take his mind away from the scary reality of living with a critical illness,” she said.

“The new ambulance will be like Fionn’s battleship, preparing him mentally and physically for the next fight.”

Joanne McCallister, chief executive of Children’s Heartbeat Trust, says that the launch of the ambulance is extremely positive for the families assisted by the charity.

“Through our work, we’ve seen first-hand just how stressful travelling backwards and forwards to hospital with an ill child can be,” she said.

“It is a very traumatic time for both children and parents, who often have to take time off work to care for their child which can lead to financial pressures, especially in the current economic climate.”

“Children’s Heartbeat Trust already supports families emotionally, socially and financially, and our main motivation behind the creation of the ambulance was to help make perhaps one of the most frightening and difficult journeys that little bit easier.

“We hope that the interior look and feel of the ambulance, alongside all the entertainment features available, will put children and their parents more at ease and take their minds off the hospital treatment ahead.”

Rosie Byrne, Northern Ireland Ambulance Service director of operations, added: “We’re delighted to have contributed towards the funding of the new children’s ambulance.

“Given the amount of journeys that families have to make each year for their children to avail of life-saving treatment, this ambulance truly is a very much-needed service.

“A lot of effort has been put into the interior and exterior of the ambulance – to make it feel more homely than a typical ambulance – and we really hope that the children benefit from surroundings that they’re more familiar with to make the journey that little bit easier.”