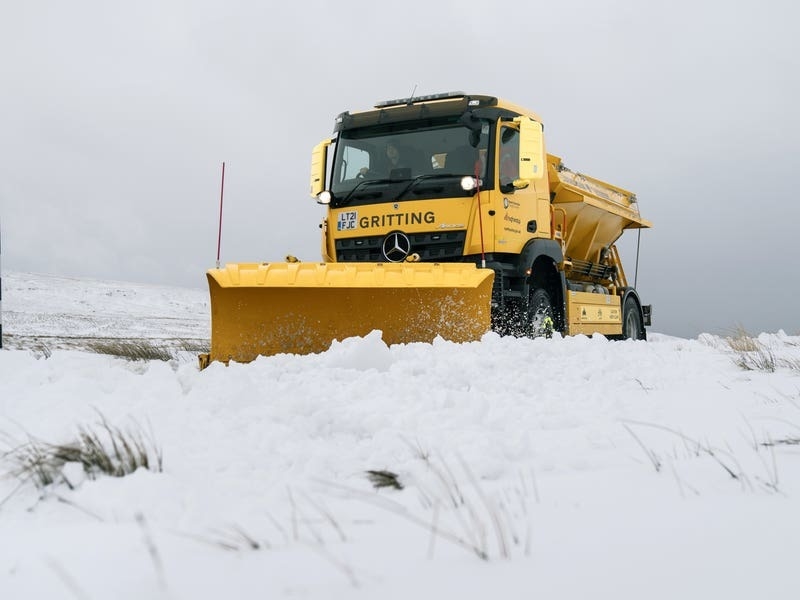 Motorists are being warned to drive carefully as icy Arctic air sweeps Scotland – bringing treacherous conditions with it.

A yellow weather alert for snow and ice is in force across northern Scotland and has been extended until 12pm on Sunday.

The Met Office also issued a yellow warning for ice across southern Scotland which was in force until noon on Friday.

Snow was disrupting travel on Friday morning, with snow gates closed on the A939 at Cock Bridge snow gate and the B974 at Cairn O’Mount in Aberdeenshire, Traffic Scotland said.

In Dumfries and Galloway, Nithsdale Police tweeted: “Fully defrost all windows before driving & drive to the conditions.”

Scotland is braced for freezing temperatures, with warnings they could drop as low as minus 10C overnight in some areas.

Forecasters said accumulations of 2-5cm of snow are possible at lower levels in the yellow snow and ice warning area, with 10-15cm above 200 metres, especially across the North Highlands, Moray and Aberdeenshire.

The Met Office warning said: “Some drifting and blizzard conditions are possible on hill routes at first. In addition, ice is likely to form on untreated surfaces, mainly where some of the showers fall as rain or sleet on some coasts.”

Some roads and railways are likely to be affected, with longer journey times by road, bus and train, it said.

Aberdeenshire Council urged people to plan ahead if they are travelling over the weekend.

Gritters will be ensuring roads are treated throughout Friday.

Authorities are also warning people to keep their pets away from frozen water during the cold weather due to the risk of falling through ice.

The Scottish Fire and Rescue Service (SFRSO has teamed up with Park Rangers from Pentland Hills Regional Park to highlight the dangers of frozen water.

Jonathan Honeyman, a fire investigation officer who trains Phoenix the dog to work alongside him, said: “We don’t want your winter walk to end in tragedy so please avoid going near frozen water when you are out with loved ones and pets.

“While ice can look and feel solid, it can suddenly crack and cause a person or a dog to fall through and potentially become trapped under the ice.

“Pets should be kept on leads and owners should avoid throwing objects onto the ice for them to retrieve.

“If anyone does get into difficulty on the ice, do not attempt to rescue them. Dial 999 and ask for the fire and rescue service then wait for help to arrive.”

Pentland Hills Regional Park has a number of reservoirs within the area and people are advised to stick to paths and heed any warning signs.

Scottish SPCA chief superintendent, Mike Flynn, said: “We receive lots of reports each year where people have tried to rescue their pet from a frozen lake or river, and often the consequences are tragic. Please keep dogs on the lead around waterways as they can be at risk of falling through ice.

“If your pet has fallen through ice then you should call the fire and rescue service and wait for assistance.