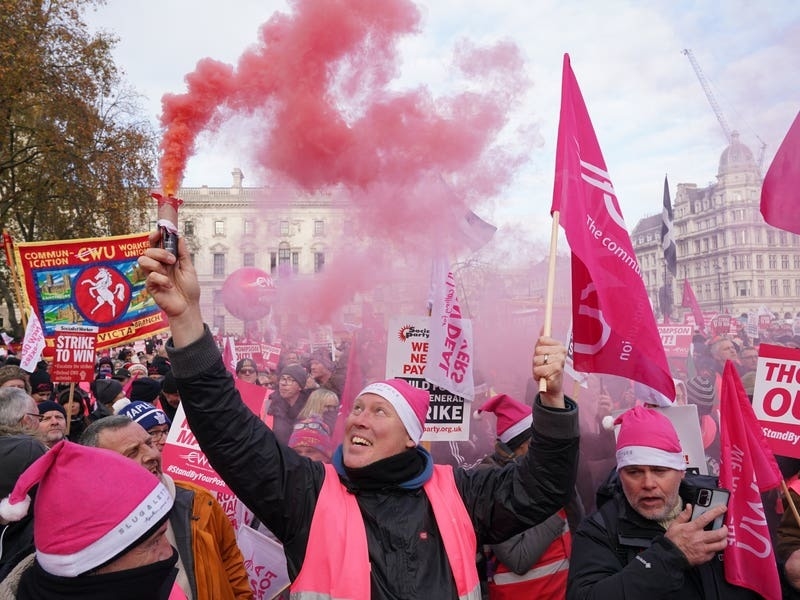 Thousands of Royal Mail workers have staged a rally to mark another strike in the increasingly bitter dispute over “unachievable” conditions they said would “destroy” the company.

Members of the Communication Workers Union (CWU) from across the UK congregated outside Parliament in central London to voice their anger about the proposed changes they believe would turn them into “gig” economy workers.

CWU general secretary Dave Ward told the PA news agency: “They’re fighting for their jobs, their livelihood, and the service that they provide to the public.

He said the company’s demands for workers to start up to three hours later “will destroy the future of Royal Mail”.

“We’re not prepared to accept that under the banner of modernisation.”

“It’s about keeping postal workers, decent working people, in work and making sure that this company has a successful future and that it doesn’t just get turned into just another parcel courier,” he said.

The union was expecting more than 15,000 members to attend the rally, describing it as the biggest postal workers’ demonstration in living memory.

Parliament Square was a sea of pink high-vis vests, flags and colourful flares.

Postal worker Gary Wright travelled from Bristol on coaches with around 200 colleagues to join the action.

He told PA: “Why we’re here today is because the terms and conditions that they’re wanting to bring in are unachievable. They’re wanting to make it into basically a gig company taking on parcels to match with DPD and the likes of Amazon, but they have not got the infrastructure.

“They’ve made £750 million and then to say ‘now we’re losing a million pounds a day’. Where that’s gone, that’s total mismanagement.”

He said the conditions the employer wants to impose would mean working Sundays for the basic rate and “later starts, later finishes”.

“I have to travel to work and for me to get home it means it might be an extra even two hours on top of normal finish time because there’s traffic and everything.

Strikes are also planned on Sunday and next Wednesday and Thursday.

A Royal Mail spokesperson said: “We spent three more days at Acas this week to discuss what needs to happen for the strikes to be lifted.

“In the end, all we received was another request for more pay, without the changes needed to fund the pay offer.

“The CWU know full well that in a business losing more than £1 million a day, we need to agree changes to the way we work so that we can fund the pay offer of up to 9% we have already made.

“While the CWU refuses to accept the need for change, it’s our customers and our people who suffer….

“We are doing everything we can to deliver Christmas for our customers and settle this dispute.”