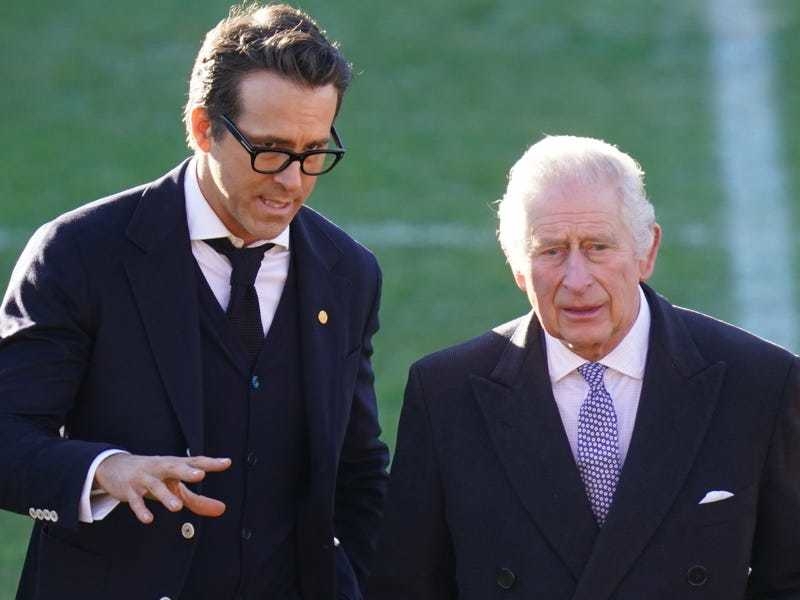 The King and Queen Consort met Hollywood actors Ryan Reynolds and Rob McElhenney as they paid a visit to the football club owned by the stars.

The royals visited Wrexham AFC, which was bought by the actors in 2021, on Friday and met players and staff as well as the co-chairmen during a tour of the Racecourse Ground.

Deadpool actor Reynolds and McElhenney, who stars in It’s Always Sunny In Philadelphia, joked they had had etiquette lessons ahead of the visit.

“Rob and I both said early on, and this holds true and for the rest of our lives, we will do anything to uplift and elevate this community and this club and having the King pay a visit is certainly one way to do it. That’s for sure. Very excited.”

The actors said they had not watched the Duke and Duchess of Sussex’s controversial Netflix show, which aired the day before the visit.

The stars have chronicled their takeover of the club in documentary Welcome To Wrexham, which was being filmed when the King and Camilla visited.

Reynolds said he hoped to talk to the monarch about the work they were doing to improve the club and stadium.

Asked if he might offer them a gift of Aviation Gin, the company which he owns, Reynolds said: “I don’t want to compete with the Royal gin now. That might create a conflict of interest.”

The King was heard wishing players luck for their upcoming game on Saturday, while Camilla told another player: “It’s an extraordinary story.”

Camilla wore a printed silk dress and Russell and Bromley boots and wrapped up against the cold temperatures in a camel cashmere coat by Anna Valentine and a wide-brimmed fluffy hat.

They watched football demonstrations from the women and youth teams on the pitch.

The royals also met staff from the club shop, administration team, coaches and medical staff and learned about the redevelopment of the club from strategic advisor to the board Shaun Harvey, as well as meeting contractors and architects involved in the project.

The King and Camilla went on to meet disabled liaison officer for Wrexham AFC, Kerry Evans, and participants of Powerchair football.

“The King and Camilla both said it’s absolutely amazing the work we’ve been doing here.

“I never thought we’d have royalty at the club, now we’ve had Hollywood royalty and real royalty!”

As he said goodbye to the King at the end of their visit, Reynolds said: “Truly, it was an honour and a pleasure and a privilege.”

McElhenney posted a picture on Twitter of the co-chairman with the King and Camilla and wrote: “You really have to watch Welcome To Wrexham for this to make sense.”

The King and Camilla went on an impromptu walkabout in the sunshine after arriving at St Giles’ Church in Wrexham city centre.

Hundreds lined the streets to greet the royal visitors, despite the freezing temperatures.

Charles shook hands and asked about the cold before telling the crowds to “have a stiff drink” as he joined his wife on the other side of the street.

The couple then met Welsh First Minister Mark Drakeford and other dignitaries before moving into the church for a service to mark Wrexham becoming a city.

Addressing the packed congregation, the King said: “My wife and I are absolutely delighted to be with you in Wrexham today to celebrate your becoming a city.

“As you know, city status was granted to eight different communities in order to celebrate my late mother’s Platinum Jubilee.

Charles said the church “truly deserves” its designation as one of the Seven Wonders of Wales.

He said: “A little earlier today, I had the opportunity to see one of the other wonders of Wrexham, namely the football club, which is busy putting Wrexham on the map as never before.

“And, of course, this comes after the Welsh national team has brought unprecedented international recognition to Wales through qualifying for the World Cup.

“The motto of Welsh football – Gorau Chwarae, Cyd Chwarae – sums up the spirit of community, and of joint endeavour, which is so important to Wales, and which, over the years, I have come to know and value more than I can possibly say.”

Later, on the final leg of the royal visit to Wrexham, Charles toured Erddig, a grand country house, garden and estate on an escarpment above the Clywedog River, now run by the National Trust Cymru.

The event marked 45 years since Charles, then the Prince of Wales, opened Erddig to the public, an occasion marked by him riding a penny farthing bike, which is kept on display.

The King was shown a display of apples grown in the orchards at Erddig, with varieties including Duchess’s Favourite, Royal Jubilee and Lane’s Prince Albert.

He then helped plant two trees; the first a copper beech tree, part of the Queen’s Green Canopy initiative to plant trees and woodland to celebrate her reign and create a lasting green legacy.

Charles then shovelled earth around the base of a sapling from the Ancient Pontfadog Oak, a 1,200-year-old tree growing on a local farm which was felled by storms in 2013.

The sapling was grafted from the original, thought to be one of the world’s oldest oak trees, and presented to the late Queen on her Platinum Jubilee this summer.

The King then spent around 40 minutes braving bitter temperatures, chatting to volunteers, staff and schoolchildren, wishing the youngsters well for their Christmas holiday.

Hilary McGrady, director-general of the National Trust, said: “It’s an honour to welcome His Majesty the King back to Erddig, and to welcome the First Minister of Wales, Mark Drakeford.

“His Majesty has long been a supporter of our work at Erddig, including opening the property to the public in 1977, and a visit to mark its 25th anniversary in the care of the National Trust in 2002.”

Mr Drakeford, who also helped plant the Pontfadog sapling, added: “The tree has an incredible history having been grafted from such a grand and ancient oak.

“I hope that the tree will grow and develop into a mighty oak that will stand for centuries to come at Erddig.”