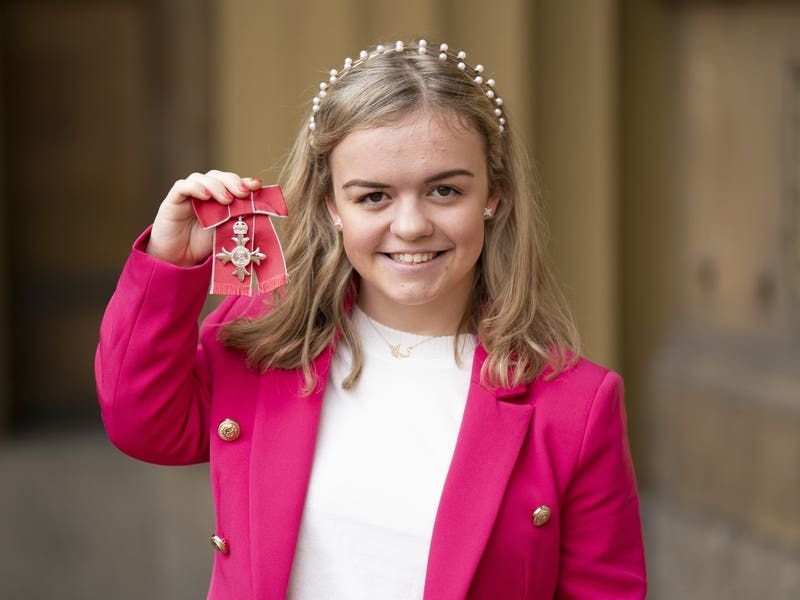 Paralympic swimming champion Maisie Summers-Newton has said that her long-time idol Ellie Simmonds going on Strictly Come Dancing to “dance her socks off” continues to prove that “anyone can do anything, no matter what disability you have”.

The 20-year-old Tokyo 2020 gold medallist was joined by renowned autism researcher Sir Simon Baron-Cohen and London 2012 closing ceremony set designer Esmeralda Devlin, among others, as they were recognised by the Princess Royal at Buckingham Palace on Wednesday.

Ms Summers-Newton, who picked up an MBE for services to swimming, described her success in Tokyo as “a dream of mine ever since I watched London 2012”.

“And then again, now, seeing her on Strictly Come Dancing, I think that’s incredible for the whole nation to watch someone with a disability go out there, have so much fun, dance her socks off.

She described receiving her honour as “something I definitely won’t forget”, and added that her ambition now is “just to try and defend my titles.

Fellow Paralympic swimmer Jordan Catchpole, who also saw success with a gold medal and a world record in the 4 x 100m freestyle relay, was awarded an MBE by Anne.

However, it was Ms Devlin’s more recent work exploring the environment of which she is particularly proud, telling PA: “Every design decision ends up being an impact on the environment for better or for worse so I think design is really key to the next steps in the right direction on climate, and urgently so.”

He added: “I’ve always joked that growing up I was always a bit of a fan, it might sound a bit crackers, but a fan of Plantagenet history and the royals and kings and queens and that has always sort of inspired me, it’s always put hairs on the back of my neck.

“So I think that in some symbolic way you can come and be honoured in this way is a real pleasure.”

The former player became a coach for the Leeds Rhinos, and has recently taken on a new role as head of culture, diversity and inclusivity at the club, and said that his role should “absolutely” be replicated in teams across the UK.

“Its biggest strength is also its biggest weakness and that’s been a tribal and parochial almost sometimes, sport.

“But actually, when we need to and when adversity strikes, we come together exceptionally well and we look after one another, it’s very tribal in nature. And so, in this day and age we’ve got to be mindful that everybody is a little bit different.”

Looking back at his career, he added: “I’ve played at some big stadiums, I’ve won some big trophies, I’ve got some nice medals I’ve won, but actually it’s the people that you do that with that’s most important.

“I think that’s what life’s all about.”