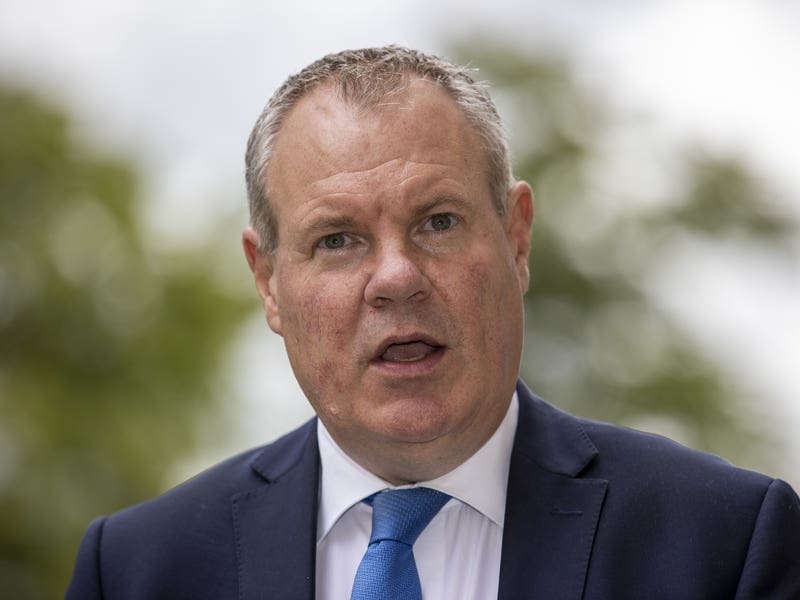 MP Conor Burns has accused the Conservative Party of rushing to judgment after he was sacked from the Government following a complaint of “serious misconduct”.

The former trade minister has also had the Tory whip suspended pending an investigation into “allegations of inappropriate behaviour” earlier this week, understood to be at the party’s annual conference.

The MP for Bournemouth West, who has held the seat since 2010, has said he will “fully co-operate” with the probe and looks forward to clearing his name.

In a statement posted on social media, Mr Burns said he had not been given “any information” about the complaint when he was informed the party would be investigating.

“On the basis of this complaint Ms Morton told me that the whip was being withdrawn and that I was standing down as trade minister. I will fully cooperate with the party’s (inquiry) and look forward to clearing my name.

“I hope the party will be as quick to conduct their (inquiry) as they were to rush to judgment.”

Mr Burns was appointed minister of state in the Department for International Trade in last month’s reshuffle, after Liz Truss took the reins in No 10.

He was previously a minister in the Northern Ireland Office, and had been a staunch ally of former prime minister Boris Johnson.

A No 10 spokesperson said: “Following a complaint of serious misconduct, the Prime Minister has asked Conor Burns MP to leave the Government with immediate effect.

“The Prime Minister took direct action on being informed of this allegation and is clear that all ministers should maintain the high standards of behaviour – as the public rightly expects.”

A spokesman for the Whips’ Office said: “We have suspended the whip pending investigation into allegations of inappropriate behaviour earlier this week.

“We take all such allegations extremely seriously. The Prime Minister has been clear that the highest standards in public life must be upheld.”

“This deeply disturbing revelation is the latest in a long line of serious misconduct allegations, and raises serious questions not only about yet another minister but about the Prime Minister’s judgment in refusing to appoint an independent ethics adviser,” she said.

“I think all I can say is that the Prime Minister has taken decisive action, and we’ll make sure that this is properly investigated,” she told Times Radio.

“In terms of politics as a whole it’s always worrying because we all expect and hope to maintain the highest standards in public life.”

Tory MP Simon Hoare said the investigation should take place “speedily”, and on the presumption that Mr Burns is “innocent until proven guilty”.

Speaking to BBC Radio 4’s PM programme, he said: “I very much hope that whatever inquiry takes place speedily and on the presumption, because I do happen to believe in that old adage that you’re innocent until proven guilty, so let’s presume he’s innocent, that he can then return to Government and continue as an effective minister.”

The development is the latest in a series of scandals to rock the Conservative Party, including groping allegations against former deputy chief whip Chris Pincher.

In May, former Tory MP Neil Parish quit his seat in Tiverton and Honiton after admitting to watching pornography in the Commons.