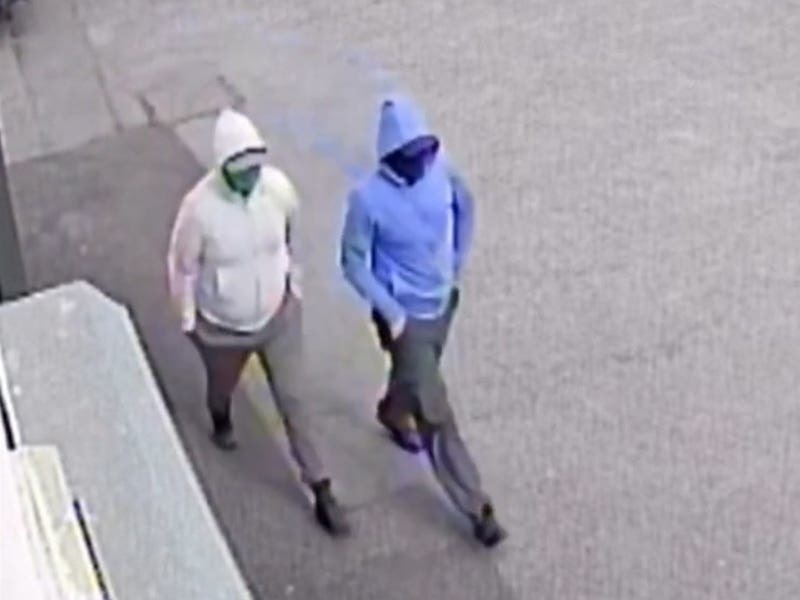 Police investigating the weekend murder of a man in Belfast have released CCTV footage of two suspects at the scene of the shooting.

Detectives from the PSNI major investigation team probing the shooting of 42-year-old Sean Fox have also revealed that a reward of up to £20,000 has been offered for information which leads to a conviction.

They are later seen running from the club.

Detectives said they are following several lines of inquiry, including Mr Fox’s friendship with another murder victim Jim Donegan, who was gunned down outside a school in Belfast in December 2018.

Making a public appeal for information and revealing the reward offered by Crimestoppers, Detective Superintendent Eamonn Corrigan said: “On Sunday afternoon, at around 2.25pm, two masked gunmen entered the Donegal Celtic Sports and Social Club on the Suffolk Road in west Belfast and made their way past several people.

“Sean Fox, who was a married father of two and a regular visitor to the club, was singled out as he sat enjoying a drink in a busy function room.

“He was shot multiple times by both gunmen.

“At one point, both gunmen stood over Sean, shooting him, as he collapsed to the floor.

“It was carried out in broad daylight and in the presence of others.

“The gunmen arrived, carried out the murder and left the club in under a minute.

“They were inside the premises for approximately 21 seconds.”

The detective said the killers left on foot along the Suffolk Road in the direction of Gweedore Gardens.

He added: “This is a popular local club used widely by local families with young children.

“Anyone in that room or indeed nearby could have been killed or seriously injured on Sunday.

“This cold-blooded act has taken a man’s life. It has left a family bereft and many others in the local community shocked.

“This barbaric act has no place in society.”

Mr Corrigan continued: “I am asking anyone with information to please get in touch.

“Were you in the social club on Sunday afternoon?  Did you witness the incident or see the two masked men arrive or leave the club?

“One suspect is a man of athletic build.  He was wearing a blue hooded top, a peaked baseball cap, dark face covering, two-toned gloves (pale on top and dark on the bottom), dark-coloured bottoms and dark shoes/trainers.

“The second suspect is also a man of athletic build and was wearing a distinctive light (possibly grey) hooded top with three red lines down each arm, a peaked baseball cap, a light-green face covering, two-toned gloves (pale on top and dark on the bottom), dark-coloured bottoms and dark shoes/trainers.

“If anyone wants to stay anonymous they can give information to the independent charity Crimestoppers on freephone 0800 555 111 or online at www.crimestoppers-uk.org. There is no caller line display, no 1471 facility and computer IP addresses are never traced or provided to detectives.”

Additionally, information can be provided to police through the major incident public portal link: mipp.police.uk/operation/PSNI22R23-PO1.